Energy Drinks: To Drink or Not to Drink?

Energy drinks are a recent invention of mankind, even though their ingredients have long been used to stimulate the nervous system. They have become the salvation for students during the exams and office workers that have to meet the deadlines. Yet, are these products as good as they seem?

Manufacturers of energy drinks claim their products only provide benefits, and continue to produce new types of beverages.

But if everything is that good, then why lawmakers in Russia and some other countries suggest laws that restrict the spread of this “miracle drink”?

A gift from Hong Kong 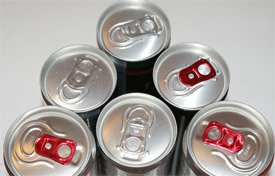 Energy drinks were given to the world by Asia. In the early 1980’s an Austrian citizen Dietrich Matesic invented and tried a drink in Hong Kong that he then decided to reproduce on an industrial scale. Today Red Bull has approximately 70% of the energy drinks market.

Energy drinks contain complex vitamins and glucose. Everyone knows the benefits of vitamins. Glucose rapidly enters the blood, and participates in the oxidative processes and provides energy to muscles, brain and other vital organs. The effect of a cup of coffee lasts from 1 to 2 hours, while the effect of an energy drink lasts 3 to 4 hours. In addition, almost all energy drinks are carbonated, which shortens the period before they kick in – this is their third difference from coffee.

These drinks must be consumed in a strict accordance with the dosage. The maximum dose is 2 cans of a drink per day. Overdoses can lead to high blood pressure or high sugar levels in the blood. There are other possible side effects: tachycardia, psychomotor agitation, increased anxiety, and depression.

People who suffer from heart diseases or hypo – and hypertension should not consume energy drinks. This was the reason why they are officially banned in France, Denmark and Norway, where these products are only sold in pharmacies, as they are considered a medicine. Additionally, vitamins contained in energy drinks cannot replace a multivitamin complex.

The statement that energy drinks provide the body with energy is unfounded. The contents of a magic can only open the way to the internal body reserves, i.e., perform the function of a key, or rather, a skeleton key. We use our own energy resources, or simply put, we borrow the energy from the body. Yet, sooner or later, we will have to pay this debt back with interest in the form of fatigue, insomnia, irritability and depression.

Like any stimulant, caffeine contained in energy drinks leads to a nervous breakdown. Its effect lasts an average of 3 to 5 hours, after which the body needs a rest. In addition, caffeine is addictive.

Energy drinks containing a combination of glucose and caffeine are very harmful for a young body.

Many energy drinks contain large amounts of vitamin B which causes heart palpitations and tremor in the limbs. Fitness fans should also remember the strong diuretic effect of caffeine. This means that energy drinks should not be consumed after workouts as during physical activity the body loses a lot of fluid.

Energy drinks contain taurine and glucuronolactone. However, the level of taurine in them is several times higher than permissible content in common food products, and the amount of glucuronolactone present in two cans of energy drink exceeds the daily norm nearly 500 times. Even scientists still do not know exactly how these ingredients affect the body, and how they interact with caffeine. Therefore, experts say the safety of using such high doses of taurine and glucuronolactone has not yet been determined, and requires further research.

It is obvious that there are more cons than pros in energy drinks. Nevertheless, the manufacturers of beverages argue that if the rules of safe use of their products are followed, then there will be no harm to health. What are these rules?

First, one cannot exceed the daily recommended dose of caffeine, that is, two cans of energy drink per day.

Second, drinking energy drinks after workouts is not recommended.

Fourth, energy drinks should not be mixed with alcohol under any circumstances, which club goers do on a regular basis. Caffeine increases blood pressure and alcohol further enhances the hypertensive effect. The result is a dangerous prospect of a hypertensive crisis.

Incidentally, it takes the body 3 to 5 hours to rid itself of caffeine, and even then only half of it.

Therefore, during this time it is not recommended to mix energy drinks and other beverages containing caffeine (tea, coffee). Otherwise, the permissible dose can be exceeded.

Many physicians believe that energy drinks are no more than vitamin coffee substitutes, only more dangerous to health. Fruit juices and glucose contained in many other products have a similar effect.

Most Russians still have not acquired taste for energy drinks. Despite their great popularity in the western world, they are not that widely spread in Russia.

Russians have their own energy drink – Vodka.