A Nanoscale Rope, and Another Step Toward Complex Nanomaterials That Assemble Themselves

Scientists at the U.S. Department of Energy’s Lawrence Berkeley National Laboratory (Berkeley Lab) have coaxed polymers to braid themselves into wispy nanoscale ropes that approach the structural complexity of biological materials.

Their work is the latest development in the push to develop self-assembling nanoscale materials that mimic the intricacy and functionality of nature’s handiwork, but which are rugged enough to withstand harsh conditions such as heat and dryness.

Although still early in the development stage, their research could lead to new applications that combine the best of both worlds. Perhaps they’ll be used as scaffolds to guide the construction of nanoscale wires and other structures. Or perhaps they’ll be used to develop drug-delivery vehicles that target disease at the molecular scale, or to develop molecular sensors and sieve-like devices that separate molecules from one another. 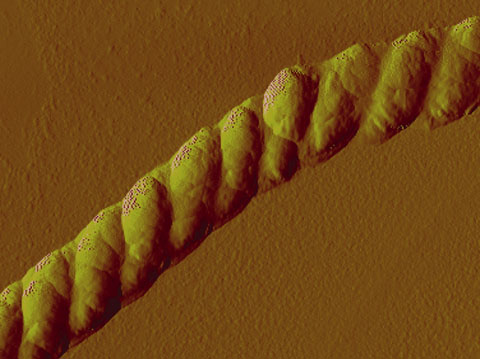 Berkeley Lab scientists have developed a nanoscale rope that braids itself, as seen in this atomic force microscopy image of the structure at a resolution of one-millionth of a meter. Image credit: Berkeley Lab.

Specifically, the scientists created the conditions for synthetic polymers called polypeptoids to assemble themselves into ever more complicated structures: first into sheets, then into stacks of sheets, which in turn roll up into double helices that resemble a rope measuring only 600 nanometers in diameter (a nanometer is a billionth of a meter).

“This hierarchichal self assembly is the hallmark of biological materials such as collagen, but designing synthetic structures that do this has been a major challenge,” says Ron Zuckermann, who is the Facility Director of the Biological Nanostructures Facility in Berkeley Lab’s Molecular Foundry.

In addition, unlike normal polymers, the scientists can control the atom-by-atom makeup of the ropy structures. They can also engineer helices of specific lengths and sequences. This “tunability” opens the door for the development of synthetic structures that mimic biological materials’ ability to carry out incredible feats of precision, such as homing in on specific molecules.

“Nature uses exact length and sequence to develop highly functional structures. An antibody can recognize one form of a protein over another, and we’re trying to mimic this,” adds Zuckermann.

Zuckermann and colleagues conducted the research at The Molecular Foundry, which is one of the five DOE Nanoscale Science Research Centers premier national user facilities for interdisciplinary research at the nanoscale. Joining him were fellow Berkeley Lab scientists Hannah Murnen, Adrianne Rosales, Jonathan Jaworski, and Rachel Segalman. Their research was published in a recent issue of the Journal of the American Chemical Society.

The team started with a block copolymer, which is a polymer composed of two or more different monomers. 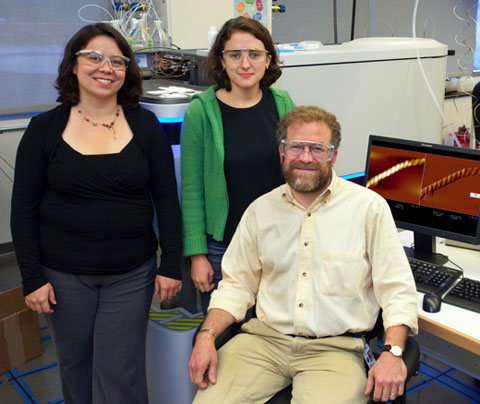 “Simple block copolymers self assemble into nanoscale structures, but we wanted to see how the detailed sequence and functionality of bioinspired units could be used to make more complicated structures,” says Rachel Segalman, a faculty scientist at Berkeley Lab and professor of Chemical and Biomolecular Engineering at University of California, Berkeley.

With this in mind, the peptoid pieces were robotically synthesized, processed, and then added to a solution that fosters self assembly.

The result was a variety of self-made shapes and structures, with the braided helices being the most intriguing. The hierarchical structure of the helix, and its ability to be manipulated atom-by-atom, means that it could be used as a template for mineralizing complex structures on a nanometer scale.

“The idea is to assemble structurally complex structures at the nanometer scale with minimal input,” says Hannah Murnen. She adds that the scientists next hope is to capitalize on the fact that they have minute control over the structure’s sequence, and explore how very small chemical changes alter the helical structure.

Says Zuckermann, “These braided helices are one of the first forays into making atomically defined block copolymers. The idea is to take something we normally think of as plastic, and enable it to adopt structures that are more complex and capable of higher function, such as molecular recognition, which is what proteins do really well.”

X-ray diffraction experiments used to characterize the structures were conducted at beamlines 8.3.1 and 7.3.3 of Berkeley Lab’s Advanced Light Source, a national user facility that generates intense x-rays to probe the fundamental properties of substances. This work was supported in part by the Office of Naval Research.

Lawrence Berkeley National Laboratory is a U.S. Department of Energy (DOE) national laboratory managed by the University of California for the DOE Office of Science. Berkeley Lab provides solutions to the world’s most urgent scientific challenges including sustainable energy, climate change, human health, and a better understanding of matter and force in the universe. It is a world leader in improving our lives through team science, advanced computing, and innovative technology. Visit our  Website.