Since leptin was discovered 20 years ago, more than 115,000 papers have been published on this protein in humans, and another 5,000 have appeared on leptin in mice.

Leptin’s popularity is not surprising, as the hormone is the principal marker for the development of morbid obesity in humans. Leptin and its receptor play critical roles in the control of food intake and energy expenditure, thereby affecting body weight, abdominal fatness, thermogenesis, insulin sensitivity, and lipid metabolism.

Despite the attention focused on leptin in mammals over the past two decades, many questions remain unanswered about its role and mechanism, especially in non-mammalian species, and documentation of its presence in birds has proved particularly elusive.

However, a team of researchers that includes Larry A. Cogburn, professor in the Department of Animal and Food Sciences at the University of Delaware, recently found leptin in the rock dove, or pigeon. 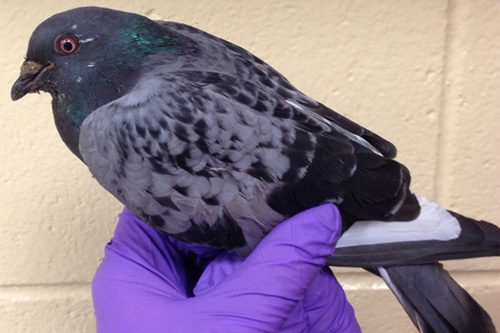 Researchers have found leptin in the rock dove, or pigeon. Image credit: University of Delaware

The work is documented in a paper, “Discovery and Characterization of the First Genuine Avian Leptin Gene in the Rock Dove (Columba livia),” published online as an early release version of Endocrinology on April 23.

“We’ve finally solved a 20-year mystery with the discovery and functional characterization of the first leptin gene in any bird,” Cogburn says. “Our hope is that further study of leptin in birds could identify novel mechanisms controlling appetite and energy balance and one day help solve the problem of obesity in humans.” 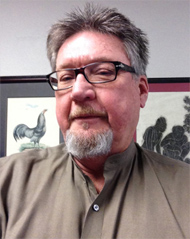 UD’s Larry A. Cogburn is part of a research team that has found leptin in the rock dove, or pigeon. Image credit: University of Delaware

Cogburn notes that there are some important differences between leptin’s manifestation in humans and in the rock dove.

“In humans, leptin comes from adipose tissue or visceral fat,” he says. “In the dove, it’s found mainly in the liver. Also, the receptor for leptin is highest in the human hypothalamus, whereas in the rock dove it’s higher in the pituitary gland.”

These differences, however, don’t negate what can be learned from studying leptin’s role and mechanism in birds and the possibility of discovering alternative signaling mechanisms.

Cogburn points out that leptin is missing from the genetic makeup of land and water fowl, including chickens, turkeys, ducks, and geese. He has dedicated a great deal of effort over the past 15 years to searching for the elusive hormone in chickens, which are intensely selected for feed intake and rapid growth.

“Even though we have not been able to find leptin in chickens and other domestic fowl, we can still use these species as biomedical models for the study of obesity,” he says. “The absence of leptin suggests an alternative pathway, and determining what that pathway is would give us a whole new route to studying obesity in humans and possibly finding new drug targets to control obesity and diabetes.”

Thus far, the use of supplemental leptin has failed as a weight-loss treatment for obese people, but a better understanding of how the hormone and its receptor actually work in non-mammalian species could lead to more effective therapies.

“Our characterization of the first avian leptin gene provides an important milestone toward advancing our understanding of the control of energy balance in birds,” Cogburn says. “In addition, our work helps resolve the protracted controversy regarding the existence of leptin in birds by demonstrating their division into those that have retained the leptin gene and those that have lost it during evolution.”

“We believe that these two avian groups provide unique model systems to study the control of appetite and energy balance and their evolution,” he continues. “The discovery of a true leptin gene in birds has been the holy grail of avian endocrinology for almost two decades. We hope that this recent discovery of leptin in birds will lead to funding for further research directed at the use of the domestic chicken as a biomedical model for the study of obesity and type 2 diabetes in humans.”

The research was supported by grants from the chief scientist of the Israeli Ministry of Agriculture and Rural Development and the Avian Biosciences Center at the University of Delaware.