Should climate change trigger the upsurge in heat and rainfall that scientists predict, people may face a threat just as perilous and volatile as extreme weather — each other.

Researchers from Princeton University and the University of California-Berkeley report in the journal Science that even slight spikes in temperature and precipitation have greatly increased the risk of personal violence and social upheaval throughout human history. Projected onto an Earth that is expected to warm by 2 degrees Celsius by 2050, the authors suggest that more human conflict is a likely outcome of climate change.

The researchers analyzed 60 studies from a number of disciplines — including archaeology, criminology, economics and psychology — that have explored the connection between weather and violence in various parts of the world from about 10,000 BCE to the present day. During an 18-month period, the Princeton-Berkeley researchers reviewed those studies’ data — and often re-crunched raw numbers — to calculate the risk that violence would rise under hotter and wetter conditions.

They found that while climate is not the sole or primary cause of violence, it undeniably exacerbates existing social and interpersonal tension in all societies, regardless of wealth or stability. They found that 1 standard-deviation shift — the amount of change from the local norm — in heat or rainfall boosts the risk of a riot, civil war or ethnic conflict by an average of 14 percent. There is a 4 percent chance of a similarly sized upward creep in heat or rain sparking person-on-person violence such as rape, murder and assault. The researchers report that climate-change models predict an average of 2 to 4 standard-deviation shifts in global climate conditions by 2050.

Establishing a correlation between violence and climate change now allows policymakers and researchers to examine what causes it and how to intervene, said lead author Solomon Hsiang, who conducted the work as a postdoctoral research associate in the Program in Science, Technology and Environmental Policy in Princeton’s Woodrow Wilson School of Public and International Affairs.

“We think that by collecting all the research together now, we’re pretty clearly establishing that there is a causal relationship between the climate and human conflict,” Hsiang said. “People have been skeptical up to now of an individual study here or there. But considering the body of work together, we can now show that these patterns are extremely general. It’s more of the rule than the exception.

Researchers from Princeton University and the University of California-Berkeley suggest that more human conflict is a likely outcome of climate change. The researchers found that 1 standard-deviation shift — the amount of change from the local norm — in temperature and precipitation greatly increase the risk of personal violence and social upheaval. Climate-change models predict an average of 2 to 4 standard-deviation shifts in global climate conditions by 2050 (above), with 4 representing the greatest change in normal conditions. (Image by Science/AAAS)

The existing research had essentially shown an overall link between climate conditions and these conflicts, but that link needed to be extracted from reams of figures from various disciplines in order for the research to reach general conclusions, Hsiang said. Hsiang, who is now an assistant professor at Berkeley’s Goldman School of Public Policy, worked with co-first author Marshall Burke, a doctoral candidate in Berkeley’s Department of Agricultural and Resource Economics, and Edward Miguel, the Oxfam Professor of Environmental and Resource Economics at Berkeley.

“We attained a huge amount of the data that was available and we used the same method on all of the data so that we could directly compare studies,” Hsiang said. “Once we did that, we saw that all of the results were actually highly consistent — previously they just weren’t being analyzed in a consistent way.”

The researchers examined three categories of conflict: “personal violence and crime,” which includes murder, assault, rape and domestic violence; “intergroup violence and political instability,” such as civil wars, riots, ethnic violence and land invasions; and “institutional breakdowns,” which are abrupt and major changes in governing institutions or, in extreme cases, the collapse of entire civilizations.

Extreme climatic conditions amplified violence in all three categories, regardless of geography, societal wealth or the time in history. An aberrant climate coincided with incidents including spikes in domestic violence in India and Australia; increased assaults and murders in the United States and Tanzania; ethnic violence in Europe and South Asia; land invasions in Brazil; police using force in the Netherlands; civil conflicts throughout the tropics; the collapse of ancient empires; and wars and displacement in Middle-Ages Europe.

“We find the same pattern over and over again, regardless of whether we look at data from Brazil, Somalia, China or the United States,” Miguel said. “We often think of modern society as largely independent of the environment, due to technological advances, but our findings challenge that notion. The climate appears to be a critical factor sustaining peace and wellbeing across human societies.”

And the climate does not have to deviate much to upset that peace and wellbeing, Burke said. The 1 standard-deviation shift he and his co-authors uncovered equates to a seemingly paltry change in weather: it’s roughly equal to warming an African country by 0.35°C, or by 0.63°F, for an entire year, or warming a county in the United States by 2.9°C, or by 5.2°F, for a given month.

“These are pretty moderate changes, but they have a sizable impact on those societies,” Burke said. Many global climate models project global temperature increases of at least 2 degrees Celsius over the next several decades, which, when combined with the Princeton-Berkeley findings, suggest that warming at that level could increase the risk of civil war in many countries by more than 50 percent, the researchers said. 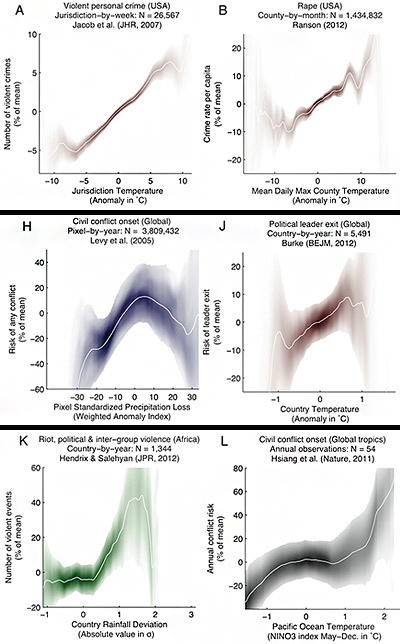 The researchers analyzed 60 studies from a number of disciplines that have explored the connection between weather and violence in various parts of the world, and throughout human history. A sampling of existing results (graphed above) show a correlation between temperature on violent personal crime and rape in the United States (A, B); drought and global civil conflict (H); temperature and the ouster of leaders worldwide (J); deviation from normal rainfall and large-scale violence in Africa (K); and global civil conflict and the intensity of El Niño (L). The darker areas indicate a stronger connection between climate and violence. Panel titles indicate the type of violence studied, the location, the unit of analysis and sample size, and the study citation. (Image by Science/AAAS)

The factors that interact with climate to produce chaos and discord are varied. A popular theory is that drought and flooding cripple an economy, especially one based on agriculture or that is already weak. When people look for someone to blame, governmental leaders have a target on their backs, as do any people with whom there is existing tension, such as an ethnic minority or a migrant group from stricken hinterlands.

But sometimes heat just makes people more aggressive. The researchers found that personal violence was far more influenced by a leap in temperature. Hsiang and his colleagues cite studies that equate excessive heat with spikes of violence in the United States and other stable, wealthy countries. For example, a 1994 study found that two groups of police officers undergoing the exact same simulation training were more likely to draw their weapons if the room was uncomfortably warm.

“There’s a large amount of evidence that environmental conditions actually change a person’s perception of their own condition, or they also can change the likelihood of people using violence or aggressive action to accomplish some goal,” Hsiang said.

“Our study is not saying that climate is the only cause of conflict, and there’s no conflict that we think should be wholly attributed to some specific climatic event,” he said. “Every conflict has roots in interpersonal and intergroup relations. What we’re trying to point out is that climate is one of the critical factors the affect how things escalate, and if they escalate to the point of violence.”

The paper, “Quantifying the influence of climate on human conflict,” was published in Science Aug. 1. The study was funded by a Princeton University postdoctoral fellowship in science, technology and environmental policy, a Graduate Research Fellowship from the National Science Foundation, and the Oxfam Faculty Chair in Environmental and Resource Economics at Berkeley.