Compound in Grapes, Red Wine Could be Key to Fighting Prostate Cancer

MU researcher finds that prostate tumor cells are more susceptible to treatment after being exposed to resveratrol, a compound found in grape skins and red wine.

Resveratrol, a compound found commonly in grape skins and red wine, has been shown to have several beneficial effects on human health, including cardiovascular health and stroke prevention. Now, a University of Missouri researcher has discovered that the compound can make prostate tumor cells more susceptible to radiation treatment, increasing the chances of a full recovery from all types of prostate cancer, including aggressive tumors.

“Other studies have noted that resveratrol made tumor cells more susceptible to chemotherapy, and we wanted to see if it had the same effect for radiation therapy,” said Michael Nicholl, an assistant professor of surgical oncology in the MU School of Medicine. “We found that when exposed to the compound, the tumor cells were more susceptible to radiation treatment, but that the effect was greater than just treating with both compounds separately.” 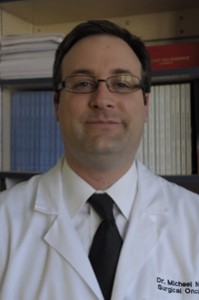 Prostate tumor cells contain very low levels of two proteins, perforin and granzyme B, which can function together to kill cells. However, both proteins need to be highly “expressed” to kill tumor cells. In his study, when Nicholl introduced resveratrol into the prostate tumor cells, the activity of the two proteins increased greatly. Following radiation treatment, Nicholl found that up to 97 percent of the tumor cells died, which is a much higher percentage than treatment with radiation alone.

Resveratrol is present in grape skins and red wine and available over-the-counter in many health food sections at grocery stores. However, the dosage needed to have an effect on tumor cells is so great that many people would experience uncomfortable side effects.

“We don’t need a large dose at the site of the tumor, but the body processes this compound so efficiently that a person needs to ingest a lot of resveratrol to make sure enough of it ends up at the tumor site. Because of that challenge, we have to look at different delivery methods for this compound to be effective,” Nicholl said. “It’s very attractive as a therapeutic agent since it is a natural compound and something that most of us have consumed in our lifetimes.” 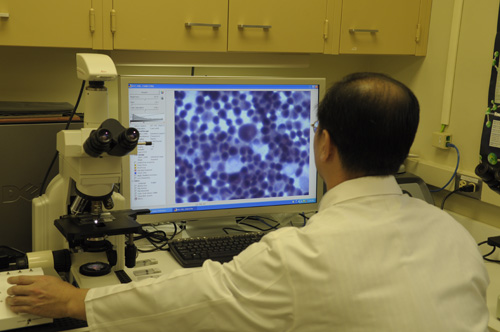 Scanning Tumor Cells. Scientists at MU have found that treatment with a compound found in grape skins and red wine could increase the chances of a full recovery from all types of prostate cancer, including aggressive tumors. Image credit: University of Missouri

Nicholl said that the next step would be to test the procedure in an animal model before any clinical trials can be initiated. Nicholl’s studies were published in the Journal of Andrology and Cancer Science. The early-stage results of this research are promising. If additional studies, including animal studies, are successful within the next few years, MU officials will request authority from the federal government to begin human drug development (this is commonly referred to as the “investigative new drug” status). After this status has been granted, researchers may conduct human clinical trials with the hope of developing new treatments for cancer.