Lithium batteries are used in many devices such as cell phones, computers and cameras, among others.

University of Delaware doctoral student Wei-Fan Kuan is investigating ways to improve membranes used in lithium batteries by capitalizing on the innate properties of block copolymers.

It is work that he believes will become increasingly important as the components in electronic devices continue to get smaller.

“Block copolymers are macromolecules composed of two or more chemically distinct homopolymers that are connected together. Their ability to self-assemble into ordered and nanoscale arrays with features on the order of 10-100 nanometers in size makes them promising candidates for next generation membranes with significantly improved performance,” said Kuan. 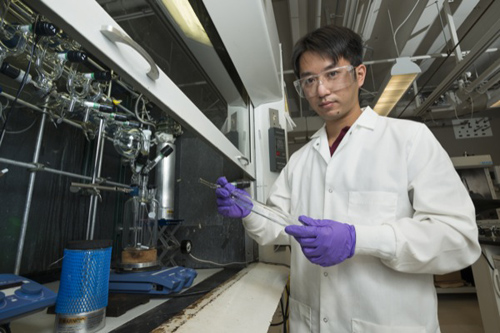 Wei-Fan Kuan is investigating ways to improve membranes used in lithium batteries by capitalizing on the innate properties of block copolymers. Photo by Evan Krape

By developing a novel strategy for the preparation of block copolymers, Kuan’s polymers permit the facile design of desirable multiply continuous network materials. Such nanoscale network structures have the potential to overcome current limitations in conducting membranes, such as poor mechanical strength, temperature stability, and conductivity.

According to his adviser Thomas H. Epps, III, Thomas and Kipp Gutshall Chair of Chemical and Biomolecular Engineering, the work will have substantial impact on the generation of stable, flexible and lightweight battery systems.

“Wei-Fan’s innovative approach of combining multiple polymerization methods to generate his unique nanostructured networks will have impacts on many types of polymeric membranes, well beyond those that he is directly investigating as part of his thesis activities,” said Epps.

Kuan will present his work at the New Synthesis and Characterization of Polymers session in the Division of Polymer Chemistry, held as part of the American Chemical Society’s (ACS) spring national meeting in New Orleans, April 7-11, 2013. He received a $500 graduate travel award to attend the conference.