Washington, D.C.-– Researchers at the Carnegie Institution have discovered a new efficient way to pump heat using crystals. The crystals can pump or extract heat, even on the nanoscale, so they could be used on computer chips to prevent overheating or even meltdown, which is currently a major limit to higher computer speeds. The research is published in the Physical Review Letters.

Ronald Cohen, staff scientist at Carnegie’s Geophysical Laboratory and Maimon Rose, originally a high school intern now at the University of Chicago carried out the research. They performed simulations on ferroelectric crystals—materials that have electrical polarization in the absence of an electric field. The electrical polarization can be reversed by applying an external electrical field. The scientists found that the introduction of an electric field causes a giant temperature change in the material, dubbed the electrocaloric effect, far above a temperature to a so-called paraelectric state. 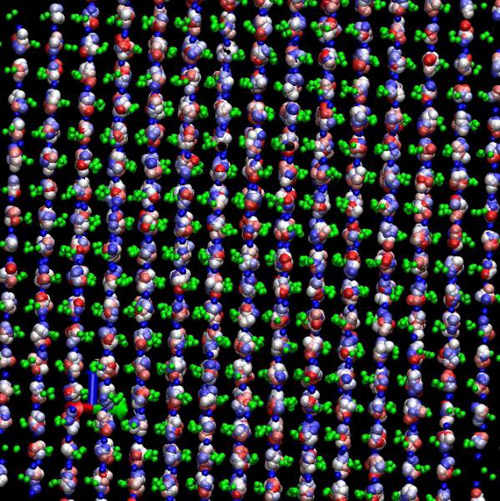 The image shows a molecular dynamics simulation of lithium niobate under a time varying electric field, which changes the sign of the polarization. Red is niobium, green is oxygen, and lithium shows a range of colors for different time steps. The niobium and oxygen are shown only for one time step for clarity. The image shows a small part of the actual simulation. Image credit: Carnegie Institution for Science

Ferroelectrics become paraelectric—that is, have no polarization under zero electric field above their transition temperature, which is the temperature at which a material changes its state from ferroelectric to paraelectric.

Rose and Cohen used atomic-scale molecular dynamics simulations, where they followed the behavior of atoms in the ferroelectric lithium niobate as functions of temperature and an electrical field. Maimon Rose started this work as a high school summer intern and is now in his second year as an undergraduate in biology at the University of Chicago. He worked on the project during breaks as an intern supported by EFree, DOE Energy Frontier Research Center at the Geophysical Laboratory. Rose remarked, “Lithium niobate had not been studied before like this. We were pretty surprised to see such a huge temperature change.”