October marks the 50th anniversary of of the 13-day Cuban Missile Crisis, when President John F. Kennedy discovered that the Soviet Union was building secret missile bases in Cuba. Forgoing the option of a Cuban invasion or air strikes, Kennedy asked Russian Premier Nikita S. Khrushchev to remove all weapons from the island, and on Oct. 28, 1962, Khrushchev conceded, halting the standoff. Here, Khrushchev’s son, Sergei Khrushchev, visiting professor of Slavic languages at Brown, reflects on the diplomatic lessons.

The perspective of the crisis has changed over time and today the history of the crisis is more focused not on the confrontation, but on cooperation.

The Cuban Missile Crisis showed that two leaders decided not to shoot first, but to think and negotiate with each other. And today that is very unusual, because we think we can only negotiate with friends. Today, we impose unconditional surrender and nobody surrenders unconditionally until fully defeated.

Negotiation was one of the biggest achievements of the Cuban Missile Crisis. I don’t think that President Kennedy liked Khrushchev more than President Obama likes the leaders of the Iranian republic, but Kennedy wanted to negotiate with Khrushchev. If we want to resolve the nuclear crisis in the Middle East, we have to sit together, and I hope that in some period of time we will find some resolution to that situation. 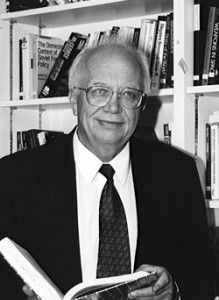 Khrushchev sent missiles to Cuba not because he wanted to change the balance of power or because he wanted to infiltrate in southern America. That’s American mythology. When President Castro officially declared in 1961 that he joined the Soviet Bloc, the Soviets had an obligation to protect all their allies. So Cuba became for the Soviet Union what Berlin became for the United States: a small useless piece of land deep inside hostile territory that they needed to defend in order to save face as a super power. So Khrushchev sent missiles to Cuba as a signal to President Kennedy that no one could invade the island. And they negotiated and found what would satisfy both of them. Khrushchev needed assurance that America and its allies wouldn’t invade Cuba. President Kennedy agreed to this so there was no need for the missiles’ presence in Cuba.

It was a tense time but it was no more tense than any other crisis. The Cuban Missile Crisis was an American psychological crisis. Americans thought that Russians and Europeans would kill each other through nuclear exchange. But America watched this all on television. With the Cuban Missile Crisis, Americans saw for the first time that they were vulnerable and it was very scary for them. Americans never had enemies at their gates, at their borders.

In reality, the Soviets never even thought about using the missiles. Khrushchev, like Kennedy, used the nuclear weapons as a political tool. Victory wasn’t the end goal for either man. For Kennedy, this thinking went against the advise of the EX-COMM (Kennedy’s Executive Committee), which favored the use of force to attack the island without the knowledge that there were more than 40,000 Soviet troops there and about 100 tactical nuclear weapons in Cuba at the time. President Kennedy used his wisdom and opposed all of these people, thanking them for their advice but deciding the opposite, deciding to negotiate.