Global warming villain CO2 may have a surprisingly green future

The next frontier in the search for renewable energy lies less than two miles from where you are now.

Unless you’re reading this on the International Space Station.

Geothermal heat a mile or two deep in Earth’s crust is a potential source of energy that could be tapped by an unlikely carrier: carbon dioxide (CO2), the central villain in global warming. That energy, unlike solar and wind, could be easily turned on and off without the intermediate step of being stored in a battery. And it would be constant and reliable.

Such is the tantalizing prospect of the CO2-plume geothermal (CPG) system, invented by three University of Minnesota researchers: Martin Saar, an associate professor of earth sciences; then-graduate student (now postdoc) Jimmy Randolph; and mechanical engineering professor Thomas Kuehn, all in the College of Science and Engineering.

The idea is to capture and inject waste CO2 from fossil fuel-fired power plants into sedimentary basins at least a half-mile underground. The Earth will heat and pressurize the CO2, some of which would then rise buoyantly through a pipe to the surface. There, the hot, high-pressure CO2 could run a turbine to generate electricity.

“Electricity harvested with CPG could run injection pumps, and the leftover would go to the grid,” says Saar. “The revenue could potentially offset carbon capture costs, which are the major economic roadblock to carbon capture and storage.”

Computer models predict high efficiency and return for CPG. The U has applied for international patents on the process and licensed it to a startup company, Heat Mining Company LLC, to field test its feasibility. Testing is expected to begin next year, probably at a Canadian power plant near North Dakota. 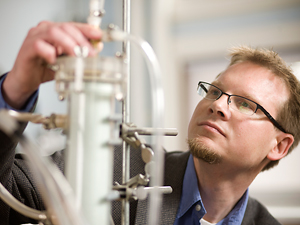 Martin Saar is one of three University of Minnesota researchers who invented a technology to tap geothermal energy with carbon dioxide. Photo: Josh Kohanek

Exploiting a quirk of nature

If CPG works, it will be because CO2 is one flaky gas. For one thing, at relatively low temperatures and pressures it becomes “supercritical,” a phase in which it has the density of a liquid but flows as easily as a gas, resulting in high mobility.

“CO2 would go supercritical during injection, after it gets about 800 meters deep,” says Saar. “It would stay supercritical underground.”

The CO2 would be injected into a sedimentary basin filled with impotable salty water and capped by a layer of impermeable rock. The supercritical CO2 would float on top of the brine and displace it as more CO2 was added. Its high mobility would allow it to rapidly transport the heat it picks up, through the hot geologic formation and up a production well to the surface. There, the release of its heat and pressure would drive a turbine to generate electricity.

The cooled and expanded CO2 would then be pumped back into the ground, along with fresh CO2 captured at the fossil fuel power plant, to repeat the cycle.

“As a result, no CO2 is released to the atmosphere, and, in fact, all of the CO2 is eventually, permanently stored underground,” says Saar. “This results in a geothermal power plant with a negative carbon footprint.”

CPG has advantages over traditional geothermal systems that operate with water, he notes.

“Its fluid mobility is two to four times higher than water’s, and so it moves much more easily through pores,” he explains.

“Altogether, it will deliver electricity at about twice the rate as water and with about four times the efficiency, assuming similar operating conditions.”

“The saline reservoirs have so much volume, they are considered the most realistic option for storing CO2 away from the atmosphere. They have a much larger volume than vegetation,” he explains. “This is one of very few, and maybe the only, option for storing CO2 in amounts necessary to mitigate climate change.” 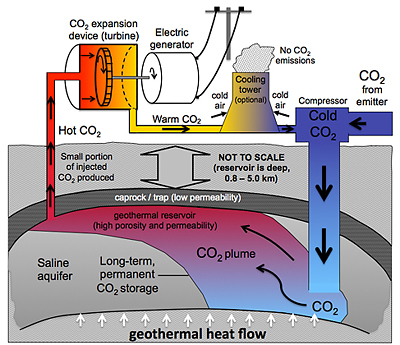 In addition to showing whether CPG will perform as promised in computer simulations, field tests are necessary to spot problems. For example, supercritical CO2 might react with rock to form deposits that plug up the geothermal reservoir, and the briny water may cause unforeseen problems when it is displaced.

One thing is sure, though. CPG would not involve hydrofracking, the controversial practice of injecting solutions of chemicals into underlying rock to extract fossil fuels.

“Because CO2 operates at higher efficiencies, we could use it in areas of the country where deep-rock temperatures are lower than they are in prime places like the western United States,” Saar says. “This is a way to make fossil fuel power plants green, and economically feasible, while expanding the regions worldwide where renewable geothermal energy can be tapped.

“Finally, because geothermal energy is available 24/7 and CPG can also store energy underground, it can be used both as a baseload power source and as a high-efficiency energy ‘battery.’ This could be a game changer for [intermittent sources like wind and solar], which have been unable to guarantee energy delivery when needed without some storage device.”