ARMONK, N.Y. – A new IBM study of more than 1,700 Chief Executive Officers from 64 countries and 18 industries worldwide reveals that CEOs are changing the nature of work by adding a powerful dose of openness, transparency and employee empowerment to the command-and-control ethos that has characterized the modern corporation for more than a century.

The advantages of the fast-moving trend are clear. According to the IBM CEO study, companies that outperform their peers are 30 percent more likely to identify openness – often characterized by a greater use of social media as a key enabler of collaboration and innovation – as a key influence on their organization. Outperformers are embracing new models of working that tap into the collective intelligence of an organization and its networks to devise new ideas and solutions for increased profitability and growth. 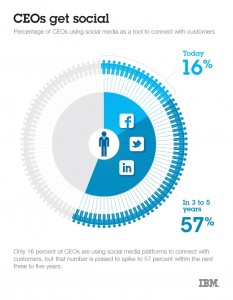 The 2012 IBM Global CEO Study of more than 1,700 Chief Executive Officers from 64 countries and 18 industries worldwide reveals that CEOs are changing the nature of work by adding a powerful dose of openness, transparency and employee empowerment to the command-and-control ethos that has characterized the modern corporation for more than a century. Image credit: IBM

To forge closer connections with customers, partners and a new generation of employees in the future, CEOs will shift their focus from using e-mail and the phone as primary communication vehicles to using social networks as a new path for direct engagement. Today, only 16 percent of CEOs are using social business platforms to connect with customers, but that number is poised to spike to 57 percent within the next three to five years. While social media is the least utilized of all customer interaction methods today, it stands to become the number two organizational engagement method within the next five years, a close second to face-to-face interactions.

Coming after decades of top-down control, the shift has substantial ramifications – not just for the CEOs themselves – but for their organizations, managers, and employees, as well as for universities and business schools, and information technology suppliers. IBM’s research finds that technology is viewed as a powerful tool to recast organizational structures. More than half of CEOs (53 percent) are planning to use technology to facilitate greater partnering and collaboration with outside organizations, while 52 percent are shifting their attention to promoting great internal collaboration.

“One of the most compelling findings is how in tune CEOs are about the implications and impact of social media,” said Bridget van Kralingen, senior vice president, IBM Global Business Services. “Rather than repeating the familiar lament about de-personalizing human relationships, this view leans heavily in favor of deepening them, and using dynamic social networks to harness collective intelligence to unlock new models of collaboration.”

Greater openness is not without risks. Openness increases vulnerability. The Internet – especially through social networks – can provide a worldwide stage to any employee interaction, positive or negative. For organizations to operate effectively in this environment, employees must internalize and embody the organizations values and mission. Thus, organizations must equip employees with a set of guiding principles that they can use to empower everyday decision making. Championing collaborative innovation is not something CEOs are delegating to their HR leaders. According to the study findings, the business executives are interested in leading by example. 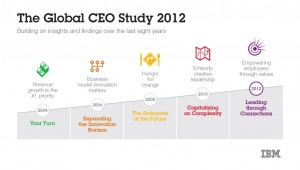 The Global CEO Study 2012. For the past decade, IBM has been tracking what matters most to CEOs across the world. Image credit: IBM

To build its next-generation workforce, organizations have to actively recruit and hire employees who excel at working in open, team-based environments. At the same time, leaders must build and support practices to help employees thrive, such as encouraging the development of unconventional teams, promoting experiential learning techniques and empowering the use of high-value employee networks.

The trend toward greater collaboration extends beyond the corporation to external partnering relationships. Partnering is now at an all-time high. In 2008, slightly more than half of the CEOs IBM interviewed planned to partner extensively. Now, more than two-thirds intend to do so.

“Innovating together with your partners is a win-win for both,” Peter Voser, Chief Executive Officer, Royal Dutch Shell plc says. “At Shell, we not only deal with energy, we also need to focus on challenges such as water and food as they’re all interlinked. That’s why driving innovation together, also across industries, is extremely important.” 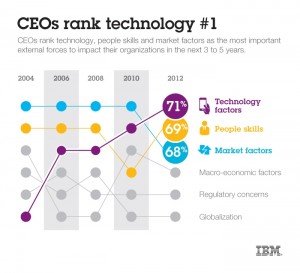 CEOs Rank Technology #1. For the first time in the IBM CEO Study's history, technology factors rank as the most important external force to impact organizations in the future. Image credit: IBM

The IBM study found that a majority (71 percent) of global CEOs regard technology as the number one factor to impact an organization’s future over the next three years – considered to be a bigger change agent than shifting economic and market conditions.

Across all aspects of their organization – from financials to competitors to operations – CEOs are most focused on gaining deeper insights about their customers. Seven out of every ten CEOs are making significant investments in their organizations’ ability to draw meaningful customer insights from available data.

Given the data explosion most organizations are facing, CEOs recognize the need for more sophisticated business analytics to mine the data being tracked online, on mobile phones and social media sites. The traditional approach to understanding customers better has been to consolidate and analyze transactions and activities from across the entire organization. However, to remain relevant, CEOs must piece together a more holistic view of the customer based on how he or she engages the rest of the world, not just their organization. The ability to drive value from data is strongly correlated with performance. Outperforming organizations are twice as good as underperformers at accessing and drawing insights from data. Outperformers are also 84 percent better at translating those insights into real action.

About the IBM 2012 Global CEO Study

This study is the fifth edition of IBM’s biennial Global CEO Study series. To better understand the challenges and goals of today’s CEOs, IBM consultants met face-to-face with the largest-known sample of these executives. Between September 2011 and January 2012, 1,709 CEOs, general managers and senior public sector leaders were interviewed worldwide to better understand their future plans and challenges in an increasingly connected economy.

For access to the full study findings and case studies, please visit: https://www.ibm.com/ceostudy