Complex brains evolved much earlier than previously thought, as evidenced by a 520-million-year-old fossilized arthropod with remarkably well-preserved brain structures.

The remarkably well-preserved fossil of an extinct arthropod shows that anatomically complex brains evolved earlier than previously thought and have changed little over the course of evolution. According to University of Arizona neurobiologist Nicholas Strausfeld, who co-authored the study describing the specimen, the fossil is the earliest known to show a brain.

The discovery will be published in the Oct. 11 issue of the journal Nature.

Embedded in mudstones deposited during the Cambrian period 520 million years ago in what today is the Yunnan Province in China, the approximately 3-inch-long fossil, which belongs to the species Fuxianhuia protensa, represents an extinct lineage of arthropods combining an advanced brain anatomy with a primitive body plan.

The fossil provides a “missing link” that sheds light on the evolutionary history of arthropods, the taxonomic group that comprises crustaceans, arachnids and insects.

The researchers call their find “a transformative discovery” that could resolve a long-standing debate about how and when complex brains evolved.

“No one expected such an advanced brain would have evolved so early in the history of multicellular animals,” said Strausfeld, a Regents Professor in the UA department of neuroscience. 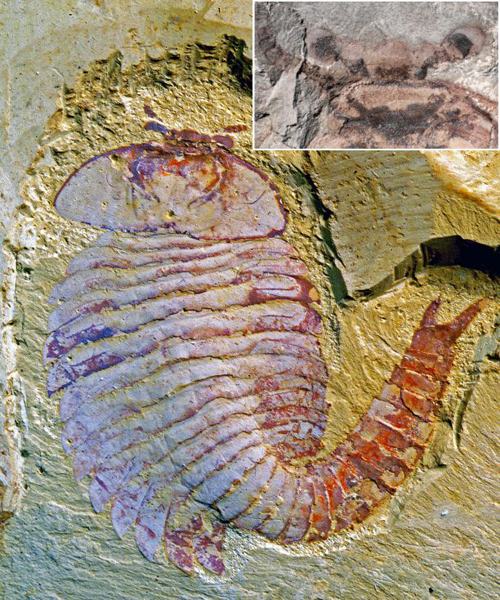 This picture shows a nearly intact fossil of Fuxianhuia protensa. The inset shows the fossilized brain in the head of another specimen. The brain structures are visible as dark outlines. (Photo by: Xiaoya Ma; inset: Nicholas Strausfeld)

According to Strausfeld, paleontologists and evolutionary biologists have yet to agree on exactly how arthropods evolved, especially on what the common ancestor looked like that gave rise to insects.

“There has been a very long debate about the origin of insects,” Strausfeld said, adding that until now, scientists have favored one of two scenarios.

Some believe that insects evolved from the an ancestor that gave rise to the malacostracans, a group of crustaceans that include crabs and shrimp, while others point to a lineage of less commonly known crustaceans called branchiopods, which include, for example, brine shrimp.

Because the brain anatomy of branchiopods is much simpler than that of malacostracans, they have been regarded as the more likely ancestors of the arthropod lineage that would give rise to insects.

However, the discovery of a complex brain anatomy in an otherwise primitive organism such as Fuxianhuia makes this scenario unlikely. “The shape [of the fossilized brain] matches that of a comparable sized modern malacostracan,” the authors write in Nature. They argue the fossil supports the hypothesis that branchiopod brains evolved from a previously complex to a more simple architecture instead of the other way around.

This hypothesis arose from neurocladistics, a field pioneered by Strausfeld that attempts to reconstruct the evolutionary relationships among organisms based on the anatomy of their nervous system. Conventional cladistics, on the other hand, usually look to an organism’s overall morphology or molecular data such as DNA sequences. 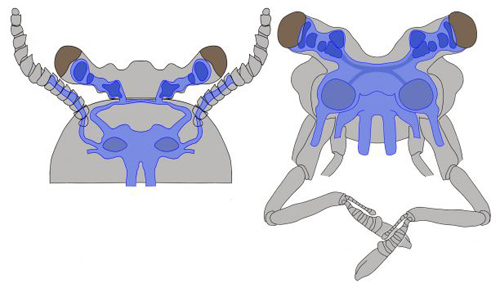 A modern brain in an ancient body: A reconstruction of the brain of the 520 million year-old fossil Fuxianhuia protensa (left), which has a very simple body shape, yet shows unexpected similarity to the complex brain of a modern crustacean, such as the land hermit crab (Coenobita clypeatus) pictured on the right. (Illustration by: Nicholas Strausfeld)

Strausfeld, who holds appointments in other UA departments including evolutionary biology and entomology, has catalogued about 140 character traits detailing the neural anatomies of almost 40 arthropod groups.

“There have been all sorts of implications why branchiopods shouldn’t be the ancestors of insects,” he said. “Many of us thought the proof in the pudding would be a fossil that would show a malacostracan-like brain in a creature that lived long before the origin of the branchiopods; and bingo! – this is what this is.”

Strausfeld traveled to the Yunnan Key Laboratory for Palaeobiology at Yunnan University in Kunming, China, to join his collaborator, Xiaoya Ma, a postdoctoral fellow at London’s Natural History Museum, in studying the brain anatomies of various fossil specimens. In the institute’s collection, they came across the fossil of Fuxianhuia protensa described in the paper.

Neuropils are portions of the arthropod brain that serve particular functions, such as collecting and processing input from sensory organs. For example, scent receptors in the antennae are wired to the olfactory neuropils, while the eyes connect to neuropils in the optic lobes.

When Strausfeld traced the fossilized outlines of Fuxianhuia’s brain, he realized it had three optic neuropils on each side that once were probably connected by nerve fibers in crosswise pattern as occurs in insects and malacostracans. The brain was also composed of three fused segments, whereas in branchiopods only two segments are fused.

“In branchiopods, there are always only two visual neuropils and they are not linked by crossing fibers,” Strausfeld said. “In principle, Fuxianhuia’s is a very modern brain in an ancient animal.”

The fossil supports the idea that once a basic brain design had evolved, it changed little over time, he explained. Instead, peripheral components such as the eyes, the antennae and other appendages, sensory organs, etc., underwent great diversification and specialized in different tasks but all plugged into the same basic circuitry.

“It is remarkable how constant the ground pattern of the nervous system has remained for probably more than 550 million years,” Strausfeld added. “The basic organization of the computational circuitry that deals, say, with smelling, appears to be the same as the one that deals with vision, or mechanical sensation.”

Co-authors on the study are Xiaoya Ma and Gregory Edgecombe from the paleontology department of the Natural History Museum, London, and Xianguang Hou, director of the Yunnan Key Laboratory for Paleobiology at Yunnan University.