The University of Delaware’s Kent Messer leads a research team that is conducting two studies at the Delaware coast to determine how people would react to offshore energy production and how that could impact the state’s economy.

The first study was conducted at Cape Henlopen and Rehoboth Beach and involved students surveying beachgoers to see how open they were to the idea of offshore energy, specifically wind turbines and oil drilling platforms.

“The question was how close these turbines and platforms could come to shore before people would no longer want to visit Rehoboth Beach or Cape Henlopen that day,” said Messer, associate professor in the Department of Applied Economics and Statistics in UD’s College of Agriculture and Natural Resources (CANR). “Would it negatively impact their experience to the point where they didn’t want to be there anymore?”

Other faculty members involved in the research team include Joshua Duke, professor in the Department of Applied Economics and Statistics; George Parsons, professor of economics and in the School of Marine Science and Policy in UD’s College of Earth, Ocean, and Environment; and Janet Johnson, associate professor of political science and international relations in the College of Arts and Sciences.

The students involved in this survey were Walker Jones of Virginia State University, who attended the CANR Summer Institute; Seth Olsen, a CANR sophomore who is also a Delaware Environmental Institute (DENIN) Scholar; and Jacob Fooks, a UD doctoral level student studying business and economics.

Using a computer simulation, passersby who participated in the survey were given the option to have oil platforms or wind turbines, or both, off the coast of Delaware at various distances. 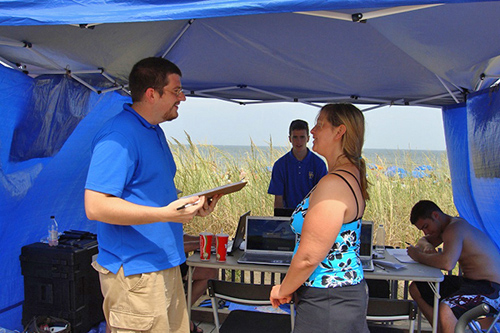 The idea behind the project was that if participants moved the objects closer to the beach, it would result in lower energy costs, especially with regard to wind turbines that lose efficiency the farther out to sea they are located, but the objects would also have a bigger impact on the coastal view.

Moving the objects away from the beach would result in higher energy costs but beach visitors would have a less obstructed view.

“If you go to the gulf coast of Mexico, you see oil rigs off the coast. We don’t have them in the Atlantic but it could happen,” said Messer. “So we used virtual reality simulations, presenting pictures of the Delaware shore and imagining what these structures would look like at various distances.”

The researchers allowed people to indicate the distance at which structures could be placed offshore before they would no longer want to visit that area, choosing to go elsewhere instead.

Messer said that 500 people participated in one stage or another of the survey, with 148 completing the entire 30-minute survey.

“An interesting result of this study is that visitors to Delaware’s beaches were comfortable with wind turbines at distances from shore that were significantly shorter than the current permitted area which is 13 miles from shore. Whether due to finding the turbines visually appealing or liking having better fishing closer to shore by the creation of artificial reefs around the turbines, there is a significant percentage of the population that approved of the turbines at a closer than we ever imagined they would.” Messer said. 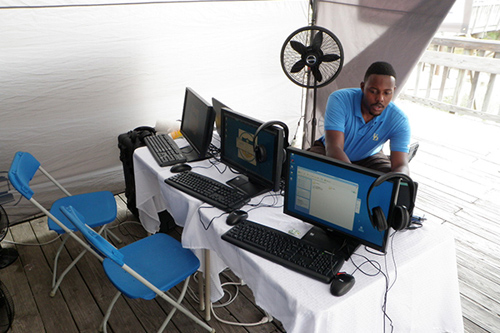 The other study involves Messer, his faculty collaborators and his students trying to gauge how proximity to the UD wind turbine on the Hugh R. Sharp Campus in Lewes impacts a tourist’s willingness to stay at certain hotels in southern Delaware.

Using the Cape May-Lewes Ferry as their “floating lab,” Messer and his students auctioned off lottery tickets to willing participants in which the participants could win a free stay at one of three Lewes area locations: UD’s Virden Center, the Hotel Blue and the Beacon Motel.

Messer explained that the three hotels currently sell hotel rooms either with a view of the UD wind turbine or without a view of the turbine. The goal of this study is to measure how willing people might be to pay to see the turbine (or to avoid seeing them) and, because the hotels are at different distances from the turbine, how proximity to the wind turbine impacts tourist behavior. Overall, about 57 percent of people showed no difference or a preference for a room with a view of the turbine. This number was higher for the more luxurious Hotel Blue than for the other two. The difference in bid amount between the rooms with and without the windmill views was about 11 percent for the Virden Center and the Beacon Motel, and 17 percent for Hotel Blue. These results suggest that some visitors are sensitive to viewing wind turbines and would prefer views without them.

Messer said that both of these impacts have regional and national implications given growing interest in offshore energy, particularly wind.

“It is important to find out the sense of comfort people have with offshore energy production and who those people are,” Messer said, noting that different classes of people would include those on day trips, longtime beachgoers and coastal residents.