A new fossil discovery from Eastern Africa called the Burtele foot indicates Australopithecus afarensis, an early relative of modern humans, may not have been the only hominin to walk the plains and woodlands of what is now the Afar region of Ethiopia some 3.4 million years ago.

Researchers openly have questioned whether Au. afarensis, the species to which the famous fossil “Lucy” belongs, was the only living hominin during the late Pliocene of Africa. Lucy’s bones provided evidence that she and perhaps other early hominins may have walked upright, but whether or not she was the sole hominin species in her particular geologic time scale has been the subject of much debate.

“There was indeed more than one early hominin species during that time,” said Yohannes Haile-Selassie, head of Physical Anthropology at the Cleveland Museum of Natural History and lead author of the findings. 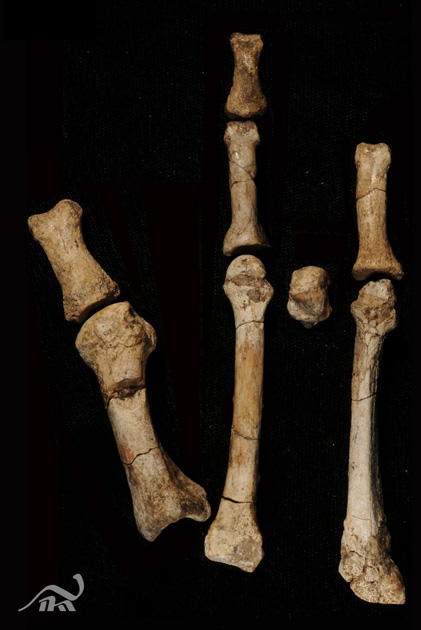 The Burtele partial foot (BRT-VP-2/73). A laboratory photo after cleaning and preparation. It is shown here in its anatomically articulated form. © The Cleveland Museum of Natural History. Photo courtesy: Yohannes Haile-Selassie

Haile-Selassie and a team of anthropologists and geologists report finding the partial skeleton of a foot that belonged to an early human ancestor that was neither Au. afarensis nor another hominin called Kenyanthropus platyops, a creature that some paleoanthropologists argue was a second hominin that lived at the same time as Au. afarensis.

The journal Nature published the finding on March 28, 2012. The National Science Foundation’s (NSF) Division of Behavioral and Cognitive Sciences partially funded the research. 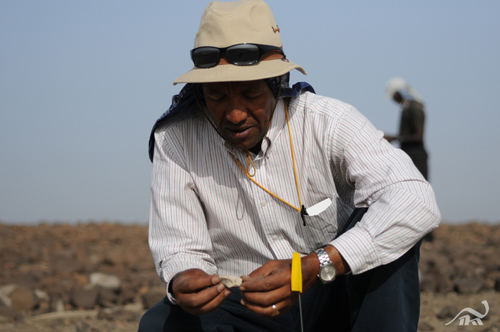 “Tim White, (a member of the research team who began uncovering Lucy in 1973), argued that Kenyanthropus platyops is a Kenyan version of Australopithecus afarensis and that the subtle differences between the two could be subsumed into an intra-specific variation.”

In other words, he argued there was no evidence a second hominin roamed the landscape during the time of Au. afarensis. But Haile-Selassie and his team may have found proof of at least two hominin species.

In Woranso-Mille, a relatively new palaeontological site located in the central Afar region of Ethiopia, researchers dug up a 3.4 million year old partial foot skeleton that does not match the contemporaneous Au. afarensis in form or shape.

Moreover, the skeletal remains infer locomotor adaptations more similar to an earlier, 4.4 million year old hominin, Ardipithecus ramidus, that was discovered by a research team led by White in 1992-1993 in the Middle Awash valley in Ethiopia. 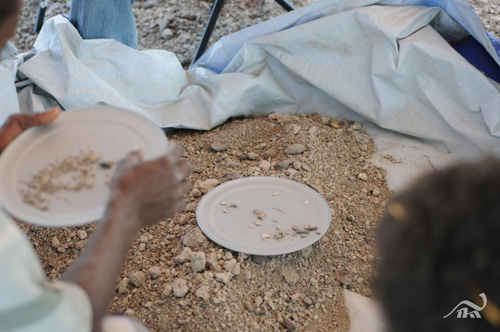 The sifted dirt is carefully picked using small picking pans and each bone fragment is picked and checked for possible fragments of the partial foot. © The Cleveland Museum of Natural History. Photo courtesy: Yohannes Haile-Selassie

“The Burtele foot differs from Australopithecus afarensis largely by possessing an opposable great toe,” said Haile-Selassie, noting the Burtele toe is more like that of Ardipithecus ramidus, inferring similar characteristics for walking, running and jumping.

Carolyn Ehardt, program director for Biological Anthropology at NSF, points out that research findings such as this foster appreciation for the complex processes that “shaped the evolutionary history of our species.”

“We become increasingly aware of the fact that the evolutionary history of hominins is not unlike that of other groups of organisms in the potential for morphological and behavioral diversity and multiple adaptive pathways characterizing those life-forms during particular evolutionary time periods,” she said. 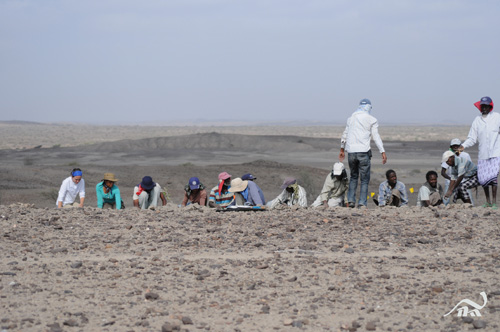 Crawling at the Burtele foot location. Each bone fragment is picked and checked for possible fragments of the partial foot. © The Cleveland Museum of Natural History. Photo courtesy: Yohannes Haile-Selassie

The Burtele foot has some skeletal ratios that fall within the human and gorilla distribution, but outside those of chimpanzees. In addition, the metatarsal of the fourth toe is longer than that of the second toe, a condition seen in some monkeys and Miocene apes.

“Unfortunately this ratio is unknown for both Ardipithecus and Australopithecus,” said Haile-Selassie. “But, the finding could indicate the primitive condition for the human family.”

The researchers say identifying and naming the species to which the Burtele foot belongs will have to await recovery of more fossils, cranial and dental elements, for example. However, they are sure it does not belong to the species of Lucy, Au. afarensis.

Said Haile-Selassie, “It is probably descended from something like Ardipithecus ramidus.” 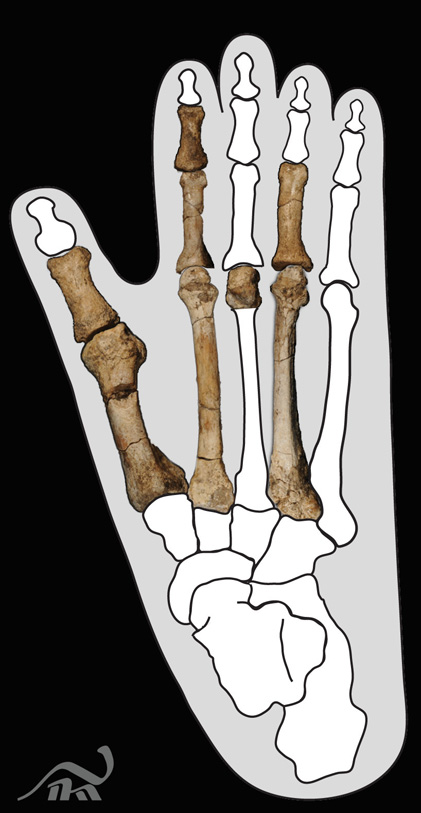 The Burtele partial foot embedded in an outline of a gorilla foot. © The Cleveland Museum of Natural History. Photo courtesy: Yohannes Haile-Selassie

In addition to NSF, the LSB Leakey Foundation, the National Geographic Society and the Cleveland Museum of Natural History supported this research. 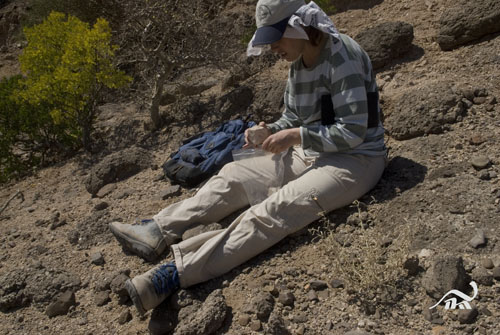