Gina Scarnati and her assistants were blaring Queen from their iPod and enjoying a rare, brief moment of down time when Woody Harrelson walked in to their massive room of hats.

“This is incredible! Are you making these?” he asked. “How many do you have to do? Can I keep looking around?”

Indeed, they were. Nearly 200 headpieces, in total. And by all means, please do, Woody.

It was one of many exciting moments on The Hunger Games set, where Scarnati, a 2000 alumna and theatre production major, worked as the movie’s milliner, an old industry term for hat maker. 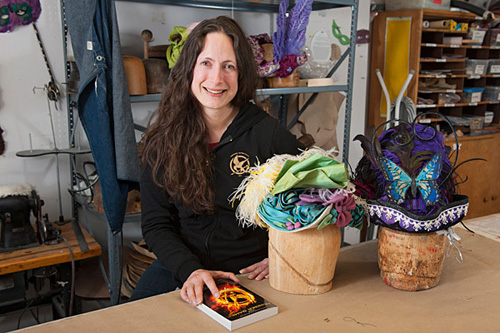 From the showgirl-style, big feather hat worn by District 1’s “career tribute” Glimmer, to the gaudy magenta flower in Effie Trinket’s hair as she first takes stage to wish the odds be ever in District 12’s favor, each of the 192 headpieces in The Hunger Games was created by Scarnati.

“If it’s worn on the head, I did it,” she says. “Even the simplicity of a flower needs to be clustered, sewn and put on a base.”

Leading a small team of assistants and working 16-hour days, 20 days in a row, she created all of the headpieces for the movie in just under six weeks.

In addition to the opulent hats worn in “the Capitol,” Scarnati spent countless hours creating hats for the tributes to wear during the famed “girl on fire” chariot parade.

“I wanted the hats to evoke the districts,” she explains.

And so the tributes from District 7, the lumber district, wore origami hats, four-feet wide from end-to-end.

Rue’s hat was composed of 96 pieces of therma-plastic, wired together and painted silver to evoke a Demeter-inspired crown of wheat, symbolic of the agricultural District 11.

Even Katniss and Peeta had hats—black, burned out Mohawk feathers with soft spikes that sadly never made it to the screen. Directors, for obvious reasons, don’t want anything distracting the viewer from the main character—a moving feather, a close-up shot of Peeta that causes the screen to crop his hat, all possible disturbances to a hungry audience.

Although she forgoes hats for flowers in the movie, Elizabeth Banks, who plays the pink-haired, prim and proper character, can be seen on the cover of Entertainment Weekly wearing Scarnati’s original creation.

It was a testament to the quality of her work and, Scarnati is quick to point out, to her training and education.

“I learned how to make hats from Andrea Barrier in this room,” she says, while sitting in the crafts room of Hartshorn Hall.

In fact, the former Dean’s Scholar student, who created her own major in theatre production and costume design and took courses from faculty in the highly selective Professional Theatre Training Program while still an undergraduate, says theatre remains her true love and passion.

And it’s clearly a symbiotic relationship.

Scarnati—who has worked with every professional theatre company in Delaware as well as on the design sets of independent films, Hollywood movies and television shows like True Blood—notes that her theatre background has been one of her greatest assets in film.

“Film is so different, but in Los Angeles, most people have high esteem for theatre arts,” she says. “The attitude is, ‘Oh, you come from theatre? Then you can do everything’.”