Like cleaning the lenses of a foggy pair of glasses, scientists are now able to use a technique developed by UCLA researchers and their European colleagues to produce three-dimensional images of breast tissue that are two to three times sharper than those made using current CT scanners at hospitals. The technique also uses a lower dose of X-ray radiation than a mammogram.

These higher-quality images could allow breast tumors to be detected earlier and with much greater accuracy. One in eight women in the United States will be diagnosed with breast cancer during her lifetime.

The research is published the week of Oct. 22 in the early edition of the journal Proceedings of the National Academy of Sciences.

The most common breast cancer screening method used today is called dual-view digital mammography, but it isn’t always successful in identifying tumors, said Jianwei (John) Miao, a UCLA professor of physics and astronomy and researcher with the California NanoSystems Institute at UCLA.

“While commonly used, the limitation is that it provides only two images of the breast tissue, which can explain why 10 to 20 percent of breast tumors are not detectable on mammograms,” Miao said. “A three-dimensional view of the breast can be generated by a CT scan, but this is not frequently used clinically, as it requires a larger dose of radiation than a mammogram. It is very important to keep the dose low to prevent damage to this sensitive tissue during screening.”

Recognizing these limitations, the scientists went in a new direction. In collaboration with the European Synchrotron Radiation Facility in France and Germany’s Ludwig Maximilians University, Miao’s international colleagues used a special detection method known as phase contrast tomography to X-ray a human breast from multiple angles.

They then applied equally sloped tomography, or EST — a breakthrough computing algorithm developed by Miao’s UCLA team that enables high-quality image-reconstruction — to 512 of these images to produce 3-D images of the breast at a higher resolution than ever before. The process required less radiation than a mammogram.

In a blind evaluation, five independent radiologists from Ludwig Maximilians University ranked these images as having a higher sharpness, contrast and overall image quality than 3-D images of breast tissue created using other standard methods.

“Even small details of the breast tumor can be seen using this technique,” said Maximilian Reiser, director of the radiology department at Ludwig Maximilians University, who contributed his medical expertise to the research. 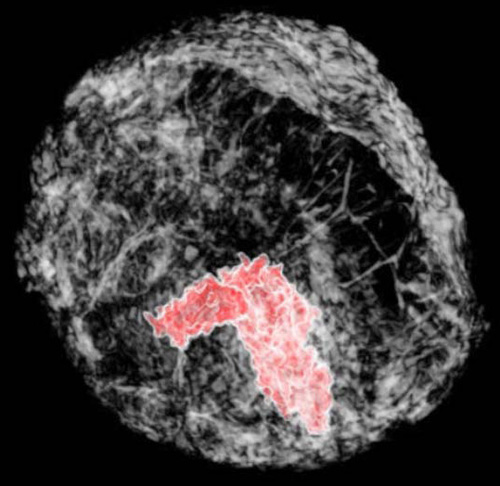 The technology commonly used today for mammograms or imaging a patient’s bones measures the difference in an X-ray’s intensity before and after it passes through the body. But the phase contrast X-ray tomography used in this study measures the difference in the way an X-ray oscillates through normal tissue rather than through slightly denser tissue like a tumor or bone. While a very small breast tumor might not absorb many X-rays, the way it changes the oscillation of an X-ray can be quite large, Miao said. Phase contrast tomography captures this difference in oscillation, and each image made using this technique contributes to the overall 3-D picture.

The computational algorithm EST developed by Miao’s UCLA team is a primary driver of this advance. Three-dimensional reconstructions, like the ones created in this research, are produced using sophisticated software and a powerful computer to combine many images into one 3-D image, much like various slices of an orange can be combined to form the whole. By rethinking the mathematic equations of the software in use today, Miao’s group developed a more powerful algorithm that requires fewer “slices” to get a clearer overall 3-D picture.

“The technology used in mammogram screenings has been around for more than 100 years,” said Paola Coan, a professor of X-ray imaging at Ludwig Maximilians University. “We want to see the difference between healthy tissue and the cancer using X-rays, and that difference can be very difficult to see, particularly in the breast, using standard techniques. The idea we used here was to combine phase contrast tomography with EST, and this combination is what gave us much higher quality 3-D images than ever before.”

While this new technology is like a key in a lock, the door will only swing open — bringing high-resolution 3-D imaging from the synchrotron facility to the clinic — with further technological advances, said Alberto Bravin, managing physicist of the biomedical research laboratory at the European Synchrotron Radiation Facility. He added that the technology is still in the research phase and will not be available to patients for some time.

“A high-quality X-ray source is an absolute requirement for this technique,” Bravin said. “While we can demonstrate the power of our technology, the X-ray source must come from a small enough device for it to become commonly used for breast cancer screening. Many research groups are actively working to develop this smaller X-ray source. Once this hurdle is cleared, our research is poised to make a big impact on society.” 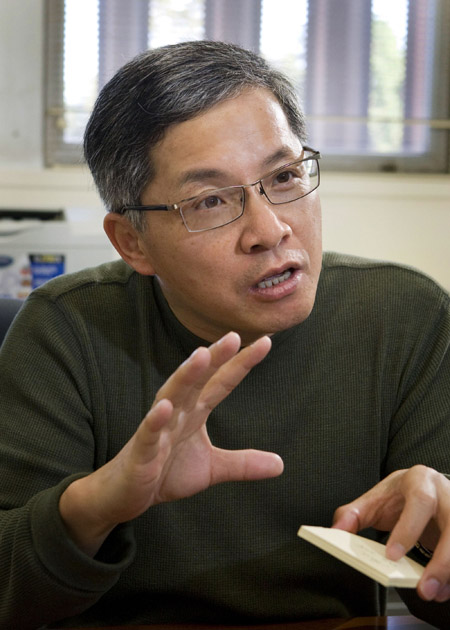