Berkeley Lab Startup Wants to Know How Damaged Your DNA Is

Exogen can check the DNA health not only of an individual but that of an entire region, thus answering questions on the impact of environmental events.

Currently if a scientist or doctor wanted to measure the level of a person’s DNA damage, they would have to look at some cells in a fluorescent microscope and manually count the number of DNA breaks. This kind of counting is labor-intensive, time-consuming, and a highly subjective process. Lawrence Berkeley National Laboratory (Berkeley Lab) scientist Sylvain Costes, who has spent over a decade studying the effects of low-dose radiation on cellular processes, came up with a way to automate the job using a proprietary algorithm and a machine to scan specimens and objectively score the damaged DNA.

The process was so quick and reliable he decided it should be made widely available. By screening for DNA damage, which is linked to many diseases, including cancer, neurodegenerative disorders, and immunological diseases, Costes and co-founder Jonathan Tang envisioned being able to provide valuable health information to the public. Thus was born Exogen Biotechnology, the latest startup company to spin off from technology developed at Berkeley Lab, a U.S. Department of Energy lab.

“We believe in the future this could be like a cholesterol test, which you get as part of your annual checkup,” said Costes, a biophysicist and world-renowned expert in high-throughput imaging and radiation risk modeling. “There are many factors that can influence your level of DNA damage, such as your genetics, diet, exercise, exposure to ionizing radiation, and environmental factors. By knowing your baseline level and monitoring it every year, you could potentially have a readout of how those factors are impacting your health.” 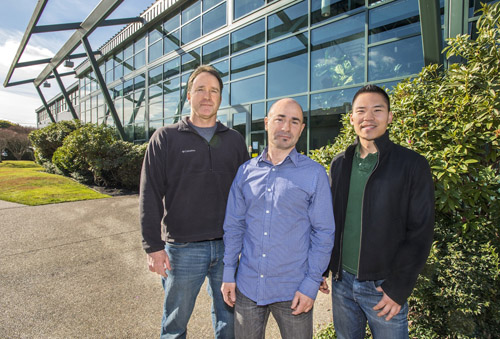 The type of DNA damage that Exogen measures is known as a DNA double-strand break, where both strands of the DNA double helix are severed. Double-strand breaks are common—in fact, every one of the 70 trillion cells in the human body experiences one to 10 double-strand breaks every day—and your body is also equipped to repair this damage. But sometimes the repair goes haywire, and the strands mismatch, or fail to repair at all. If these cells don’t die but rather continue to accumulate DNA damage and genetic mutations, that can lead to health problems.

Yet, the body’s repair capacity can vary by age, genetics, or a host of other reasons. “Everyone has a baseline level of DNA repair capacity, which is determined largely by genetics,” Costes said. “But environmental and lifestyle factors can change that number within the same person. So your genetics puts you in certain range, and then what you do puts you somewhere within that range.”

Tang is a postdoctoral fellow in Costes’ lab who specializes in computational biology and bioinformatics. Their research has focused on the risks of ionizing radiation, especially as it relates to breast cancer and, in studies for NASA, space travel. They launched Exogen with the help of another Berkeley Lab scientist, Steve Yannone, whose research focus is on human DNA repair processes as they relate to cancer, immunity, and aging.

They refined their discoveries and patent applications with a $70,000 Berkeley Lab Innovation Grant. With the improved results they were able to start the company with private funds. They are now running an online crowdfunding campaign on Indiegogo and reached their first goal of raising $50,000 in less than 10 days. The campaign allows individuals to get a report on the level of their DNA damage for as little as $99 or to get monthly tracking for $999. Contributors receive a kit to safely collect a small blood sample at home. Their new goal is to reach $150,000 and study a much larger cohort and potentially open the campaign to the rest of the world to compare damage levels between countries.

The three tested the concept last year in two trials with 100 people. They found a very strong correlation with age—the older you were, the higher your level of DNA damage. The four people in their trials who had cancer had among the highest levels of DNA damage for their age group.

Exogen’s crowdfunding campaign is also a citizen science project. With a large enough sample, the scientists hope to be able to detect geographic patterns. “We’re also asking individuals for their location, so we can create a geographical mapping of DNA damage levels,” said Tang. “We may be able to see hot spots, so if there are regions being exposed to environmental toxins we might be able to detect it right away.”

Yannone cited the recent chemical spill in West Virginia’s Elk River as an environmental event where Exogen could have played a useful role. “When you have something like the West Virginia spill, the company says there’s no danger, but there’s no objective data that people can access to say, ‘This is changing my biology,’” he said. “We think we have one way to provide these people with an objective measurement. We can look in their cells and say, your DNA damage is way off the norm. We think that’s valuable and could facilitate action.”

Besides blood samples, Exogen will also be asking people to fill out questionnaires about their medical history and lifestyle. That will allow them to begin to build a picture of how certain factors affect DNA health.

“We’re building the world’s first database on DNA damage levels,” Tang said. “We’re also collecting the metadata. We think over time as that grows it’s going to be an extraordinarily valuable thing to get at the fundamentals of the biology and health risks associated with that readout.”

Exogen plans to interface with clinicians of various specialties to evaluate how its technology can help in addressing a number of major health issues. Costes gave an example: “We think measuring DNA damage before and right after getting medical imaging, such a CT scan, would help hospitals and clinicians identify if patients are accidentally overexposed to ionizing radiation.”

Another medical application may benefit children suffering from severe combined immunodeficiency (SCID). About a third of these patients are ultrasensitive to ionizing radiation, meaning that the treatment for their disease (which usually involves radiation) can kill them. “We’ve been searching for the better part of a decade to develop a noninvasive clinical assay to discriminate between those who are radiation sensitive and those who are not,” Yannone said. “With Exogen’s technology we hope to develop the baseline data sets and the assay technology to provide this information to clinicians treating SCID children.”

For now, Exogen is not dispensing medical advice or offering diagnoses, but it does plan to seek FDA approval as a diagnostic tool. Tang points out that Exogen is looking at something completely different from what the genetic testing companies do. “When you get the results of a genetic test, you can’t change your genes,” he said. “But with our test, if you find out that you have high levels of DNA damage or poor DNA repair capacity, you could make changes to your lifestyle or your environment.”