A lot of research shows that temperature can strongly influence species interactions and sometimes shape the appearance and functioning of biological communities. That’s why a newly published finding that changes in temperature did not alter the competitive balance of power between two rival species of Chilean barnacles is an ecological surprise.

PROVIDENCE, R.I. [Brown University] — Here are two facts that make the lowly barnacle important: They are popular models for ecology research, and they are very sensitive to temperature. Given that, the authors of a new study about a bellwether community of two barnacle species in Chile figured they might see clear effects on competition between these two species if they experimentally changed temperature. In the context of climate change, such an experiment could yield profound new insights into the biological future of a major coastline that is prized for its ecological, aesthetic, and economic values.

But in the study to be printed in the April 2014 issue of the Journal of Experimental Marine Biology and Ecology, the scientists found no significant effect of temperature on competition at all. That surprising non-finding may have its own implications.

“The dominant if somewhat dated narrative in marine ecology, and ecology more broadly, is that competition is a major structuring force in natural communities,” said co-author Heather Leslie, assistant professor of environmental studies and biology at Brown University. “We know it’s a more nuanced story, but to find cases where it’s a bit of a draw is really unusual.”

Moreover, temperature did not turn out to be the mediating factor.

“Temperature wasn’t the beast that we often think of it being, which in itself is surprising,” Leslie said. 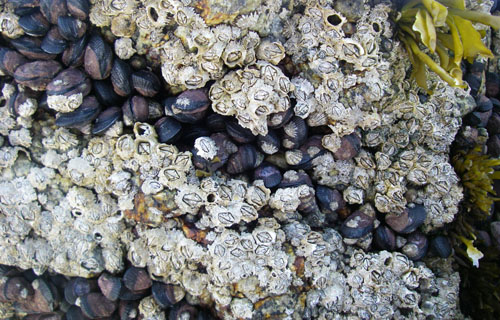 Plenty of studies of other co-occurring barnacles would have suggested otherwise. In the North Atlantic, there is a well-documented and clear dynamic between two barnacle species, the little gray barnacle (Chthamalus fragilis) and the northern rock barnacle (Semibalanus balanoides). The little gray barnacle can only survive high up on the rocks, where it is hottest and driest, because farther down it gets thoroughly routed by the northern rock barnacle. Temperature, in other words, provides the little gray’s only refuge.

The picture in Chile was downright unclear. Previous studies had yielded conflicting hints about how temperature might affect the competition between two southern hemisphere barnacle species, Jehlius cirratus and Notochthalamus scabrosus. Led by Emily Lamb, who began the work as a Brown undergraduate concentrating in environmental science and is now a research assistant at the Estación Costera de Investigaciones Marinas (ECIM) in Chile, the team devised an experiment to get a more definitive answer. (Read more about a senior thesis that went the distance.)

Made in the shade

To see what effect temperature may have on their presumably competitive coexistence, Lamb and Jenna Shinen, an associate investigator at ECIM who studies coexistence and competition among the barnacles, built little 100-square-centimeter shade canopies and installed them at 10 sites along the rocks. They also selected 10 similar patches of rock to watch as controls.

They visited regularly from February to August of 2010 and measured temperature, took pictures to document barnacle abundance and growth, and even took samples for dissection to assess the species’ reproductive output.

Overall, they found that shade and cooler temperatures did not significantly tip the competitive scales in favor of one species or the other. The relative abundance of the species higher up on the rocks, for example, didn’t change at all with shading, even though the little shade shelters did indeed cool the plots.

The shade wasn’t irrelevant. It had meaningful effects on the barnacles. Both species grew better in the shade (it was especially significant for Notochthalamus) than in the hot sun. Shade affected reproduction, too, but it didn’t change the balance of power up and down the rocks.

“Finding a pair of species that exhibit vertical zonation but do not strongly compete is unusual,” Lamb said.

And so, in apparent defiance of ecological intuition, whether the heat is on or off, these barnacles will weather it together.