Among Indian immigrants, religious practice and obesity may be linked, study shows

Asian Indians are one of the fastest growing ethnic groups in the United States, and roughly half a million people of Indian ancestry live in California — more than any other state. Individuals from this group are strongly predisposed to obesity-related conditions such as diabetes and heart disease, due in large part to physical inactivity, diets low in fruit and vegetables, and insulin resistance.

Among other racial and ethnic groups, research has shown that religious practices and religiosity have been associated with obesity and greater body weight, but no one had studied this potential link among Indians. 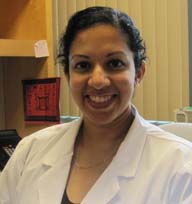 Now, a UCLA-led research team that examined the relationship between religious practices and obesity among Indian immigrants has found that religiosity in Hindus and Sikhs — but not Muslims — appears to be an independent factor associated with being overweight or obese. The findings are published online in the peer-reviewed journal Preventive Medicine.

“This is the first known study to examine the relationship between religiosity and obesity among Asian Indians in the United States and among traditional Asian Indian religious subgroups,” said the study’s primary investigator, Dr. Nazleen Bharmal, an assistant professor of medicine in the division of general internal medicine and health services research at the David Geffen School of Medicine at UCLA.

“These different subgroups have different practices: Muslims may abstain from alcohol or avoid pork, and Hindus and Sikhs may eat only plant foods,” Bharmal said. “We were surprised to find an association between religiosity and obesity for Hindus and Sikhs but not Muslims.”

The researchers used data from the 2004 California Asian Indian Tobacco Survey, a telephone survey of 3,200 adult Asian Indian residents of California. Among those surveyed, the mean age was 37 years and most were married, well educated and had health insurance. More than half were highly religious, and most practiced Hinduism, followed by Sikhism, other religions and Islam.

Those Indian immigrants who were highly religious were more likely to be older, female, less educated and less acculturated than the less religious immigrants. Even after adjusting for differences in demographics, health status, health care access and acculturation, the researchers found that those Indians who were highly religious were more likely (1.53 greater odds) to be overweight or obese than those who were less religious. This relationship — or increased odds — persisted for Hindus and Sikhs but not Muslims.

The researchers posit that people who are more religious may be more likely to be overweight or obese because religious organizations tend to place greater emphasis on avoiding vices other than gluttony, they may provide a welcoming environment for those seeking refuge from the social stigma of obesity, and religious gatherings often involve the consumption of food and drink.

There are several possible explanations, the researchers said, for why there appears to be a link between religiosity and weight status among Hindus and Sikhs but not among Muslims.

First, there were fewer Muslims in the dataset, so there may have been too few to see an impact. Second, there are differences in religious practices: Hindus and Sikhs may adhere to a vegetarian diet but drink alcohol heavily or eat food high in saturated fat or refined sugar at frequent religious and social gatherings, while Muslims abstain from alcohol and practice 30 days of daytime fasting during Ramadan, which may decrease their risk for weight gain.

Also, while those who were highly religious generally had lower educational attainment than those who were less so, the majority of the individuals in the sample were “exceptionally well-educated,” with about 77 percent holding college degrees and 40 percent holding professional or doctoral degrees, according to Bharmal. As a result, that relatively narrow range may not have been enough to capture any associations between socioeconomic status, religiosity and obesity.