Studying bacteria from the Baltic Sea, UA researchers have discovered an entire array of previously unknown viruses that barely resemble any of the known bacteria-infecting viruses.

Researchers of the University of Arizona’s Tucson Marine Phage Lab have discovered a dozen new types of unknown viruses that infect different strains of marine bacteria.

Bacteriophages – viruses that prey on bacteria – are less familiar to most people than their flu- or cold-causing cousins, but they control processes of global importance. For example, they determine how much oxygen goes from the oceans into the atmosphere in exchange for carbon dioxide, they influence climate patterns across the Earth and they alter the assemblages of microorganisms competing in the environment.

Despite their importance, scientists know almost nothing about “environmental viruses.” This is because most bacteriophages studies focus on those involved in human diseases or food processing. 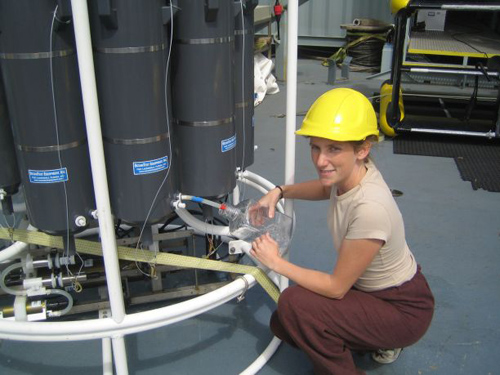 Now, a research team led by Matthew Sullivan, an assistant professor in the UA’s department of ecology and evolutionary biology, has deciphered the genetic makeup of 31 phages infecting a bacterium from the Baltic Sea known as Cellulophaga baltica. This bacterium and its relatives, collectively known as Bacteroidetes, play key roles in complex carbohydrate cycling in environments ranging from the oceans and sea ice to the human gut. The results are published in Proceedings of the National Academy of Science.

“All of the phages we found in these bacteria were not previously known to science,” said Sullivan, who is a member of the UA’s BIO5 Institute. “It shows how little we know about what is out there.”

“Every single one of those groups that we found represents a new genus and their biology is exceptional,” he added. “For example, some have genomes twice as large as those we’ve seen before.”

“More than 80 percent of the phages’ structural proteins have no known counterparts in other species,” Sullivan said. “We’re breaking new ground with these viruses pretty much everywhere we look.” 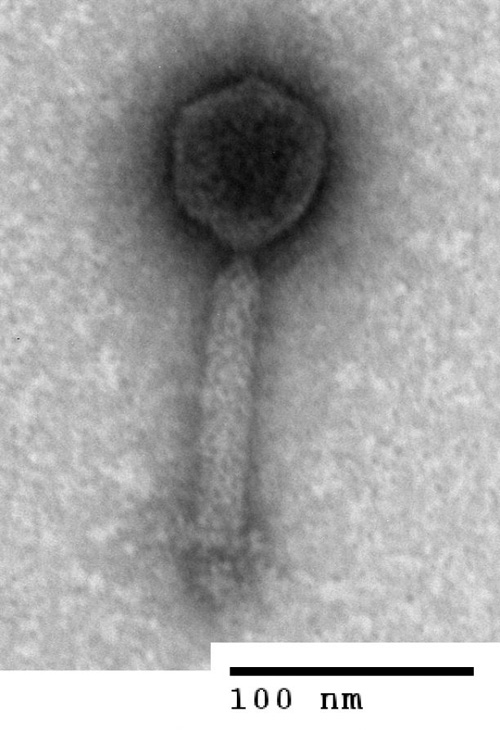 Bacteriophages come in different shapes and sizes. This one has a “head” containing the virus’ DNA and a “tail” with which it attaches to bacterial cells when it infects them. The scale bar in this electron microscope image is about one thousandth the diameter of a human hair. (Photo by: Natalie Solonenko)

The analyses also represent what the authors describe as the first glimpse in to the phage side of the rare biosphere.

“Anywhere you go, there are some organisms that are abundant and some that are rare,” Sullivan explained. “We tend to study the ones that are abundant because those are the ones we see. These Bacteroidetes phages are ubiquitous, meaning they occur in many parts of the world, but they’re never abundant – at least at the locations and times we’ve sampled so far.”

“In a random water sample, you might not find any, but if we were to sample an algae bloom, we would expect these rare biosphere organisms to become important. Now that we have them in culture, we can make a bloom happen anytime in the lab, and study them in a way that we haven’t been able to before.”

The research illustrates why environmental phages are important: Bacteria like Cellulophaga account for many of the microorganisms that make up marine and freshwater phytoplankton, where they control global cycles of oxygen and carbon, and their boom and bust cycles directly translate into abundance and shortage nutrients, which sustain global food webs and fisheries, for example.

The hidden movers and shakers behind these processes are the viruses that infect their bacterial hosts, regulating their populations and swapping genetic material among them. By understanding the viruses, scientists can develop models that can help better understand the consequences of processes ranging from algae blooms to fish stock assessments to carbon storage in the world’s oceans.

“The bacteria in the phylum Bacteriodetes are important in many places,” Sullivan said. “One example close to ‘home’ is the human gut where their ability to metabolize complex carbohydrates in concert with another phylum – Firmicutes – seems to underpin whether you are lean or obese.”

“There aren’t many marine virus-host systems that have been characterized this way, in fact, only two,” he said.

“As far as marine microbes and their viruses are concerned, the paradigm used to be that they aren’t nearly as complex in their genetic diversity as their counterparts in sewage, for example,” Sullivan explained. “This research suggests that this limited marine diversity is more a function of undersampling, and that extrapolating from the one or a few model systems may not be representative of the actual variability in nature.”

“You could say we’re seeing ‘viral dark matter’ for the first time,” he added, referring to the cosmic analogy of the elusive, invisible matter believed to far outweigh the visible matter in the universe. 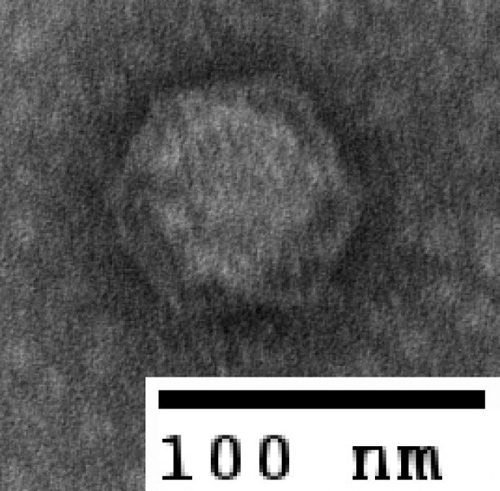 A tailless bacteriophage. Sullivan’s research group recently published a paper (see extra info) showing that about 80 percent of viruses found in the sea are non-tailed, while most research in this field has focused on tailed viruses. “It shows just how far we still have to go in understanding these systems,” Sullivan said. (Photo by: Natalie Solonenko)

In a different, previous publication, Sullivan’s group showed that the most abundant viruses in the oceans are very different from those typically studied by researchers in the field.

The viruses in the study reported here – led by Sullivan’s former postdoctoral fellow Karin Holmfeldt – were so new that the researchers enlisted the help of colleagues at the Oak Ridge National Laboratory in Oak Ridge, Tenn. to apply a technique called experimental proteomics to figure out what kinds of proteins make up the viruses. The results were then checked against genomic data showing which genes for which proteins occur in clusters in the viruses’ DNA. Genes that are located next to each other suggest similar functions.

Almost all bacteriophages known so far were isolated from only three of a total of 45 groups – called “phyla” – of bacteria, Sullivan said. The new study extends this knowledge to the fourth phylum called Bacteroidetes. A phylum is a very high level of kinship among organisms; insects and crustaceans, for example, are in one phylum (arthropods), while fish, lizards, horses and humans are in another (chordates).

Funding for this study was provided by the Gordon and Betty Moore Foundation. Holmfeldt’s postdoctoral fellowship was funded by the Sweden-America foundation and the Swedish Research Council.