Above other awards: the pride of publication

Dedicated, passionate and energetic, M.D./Ph.D. student Angel Byrd has earned many accolades and research opportunities. But she only recently won a young scientist’s most coveted prize: publication as lead author of a paper highly esteemed by her colleagues.

Well on her way to fulfilling her dreams both in research and medicine, Brown University M.D./Ph.D. student Angel Byrd nevertheless had recently begun to define herself by what was missing, said her adviser, Dr. Jonathan Reichner, associate professor of surgery (research) at Rhode Island Hospital. She still wasn’t a published author.

For years she had dedicated herself to studying how immune system cells capture invading fungal pathogens. Like those cells, called neutrophils, she had seized on seemingly every opportunity that had come her way.

In high school she was the valedictorian and won a 10-year Gates Millennium Scholarship. As an undergrad at Tougaloo College she earned the opportunity to do summer research in China on gene expression and was named a Leadership Alliance scholar. Later at Brown she earned a research internship at drug giant Eli Lilly, and has piled up awards for research posters. Twice she met with senators and representatives on Capitol Hill on behalf of the American Society for Biochemistry and Molecular Biology. And after she won a coveted United Negro College Fund/Merck Graduate Fellowship in 2011, she sparkled on televisions around the country in a segment featuring her on BET.

Byrd had published abstracts and given talks at national conferences. Last month, her delivery of an invited talk won Brown University’s first top prize at the New England Science Symposium. 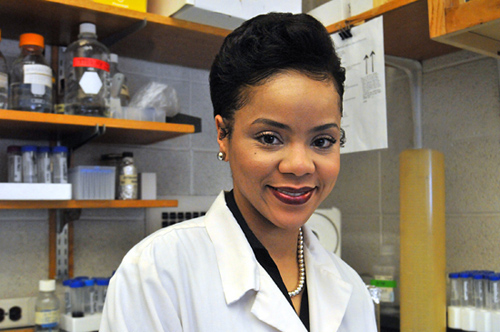 One elusive honor. She was valedictorian, Gates Millennium Scholar, UNCF/Merck Fellow, and more, but a research paper in a peer-reviewed journal was still a dream for Angel Byrd. That changed with last month’s Journal of Immunology. Image credit: Photo by Frank Mullin/Brown University

But it was not until last month that she could experience the pride — and relief — of flipping open the Journal of Immunology to see her name as lead author not only of a paper, but a paper the editors featured as one of the “top 10 percent” of the papers they publish.

“It’s something that I’ve wanted for so long,” she said. “You feel like you are just working and working and working but the way you show the outside community and our scientific colleagues the work you’ve produced is with a publication. I didn’t have that.”

But when Byrd debuted in the literature, she did it as anyone who has met her might suspect: as a star.

The labors of the lab

What Byrd found, along with Reichner and co-authors Xian O’Brien, Courtney Johnson, and Liz Lavigne, are the exact conditions and molecular means that trigger the body’s response to the invading Candida albicans. The fungus kills about 10,000 people in the United States each year, particularly babies, HIV patients, and others with weak immune systems.

Neutrophils, which are immune system’s first responders, typically swallow up small invaders, but disease-causing fungi often manifest in the body as tendril-like “hyphae” that are too big for lone neutrophils to gobble. In the lab, Byrd and Reichner were investigating how gangs of neutrophils would somehow converge on the hyphae to kill them.

One of Byrd’s experiments had identified the particular receptor on neutrophils, called CR3, that sense the structural carbohydrate beta-glucan embedded in the cell walls of the fungi.

Another of Byrd’s observations was that the clumping of neutrophils would only occur in the “extracellular matrix,” (ECM), which is the environment of a tissue between rather than within cells. Even in the presence of beta-glucan or hyphae, neutrophils wouldn’t converge and fight unless they also detected the ECM protein fibronectin.

But what caused the clumping behavior? What exactly brought and held the neutrophils together?

Byrd and Reichner remember the day two years ago that they attended the annual experimental biology conference on behalf of the American Society for Investigative Pathology in Washington, D.C. They heard a talk on “NETs” — neutrophil extracellular traps — by Dr. Paul Kubes of the University of Calgary. He described how netrophils could extrude strands of DNA to form a sticky mesh to trap invaders. 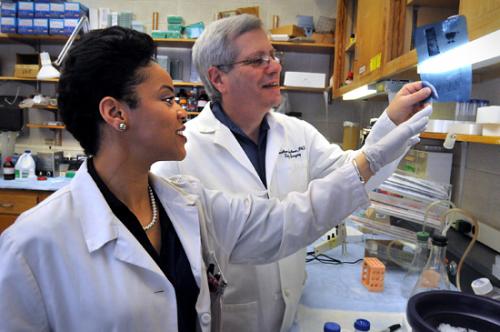 The Aha moment. Byrd and her adviser Jonathan Reichner were sitting in different parts of the auditorium at a national conference when they heard a small bit of news that lit up their research on neutrophils and fungal pathogens. They started texting each other immediately. Image credit: Photo by Frank Mullin/Brown University

Byrd and Reichner weren’t sitting together, but when they heard this, they could see the proverbial light go on over each other’s heads.

“It was an Aha moment,” Byrd said. They started texting each other.

Byrd went back to the lab. If her clumps were actually drawn and held together with those NETs of DNA, then she’d have connected the dots of how neutrophils respond to fungi. To test the idea, she applied an enzyme that dissolves DNA and therefore NETs.

When she did, her clumps declumped. Therefore, NETs were playing a major role in the neutrophil clumping behavior.

“Once the neutrophils recognize the beta-glucan in the fungal cell wall they respond by releasing webs of DNA like Spiderman,” Reichner said. “These DNA containing NETs ensnare the fungal pathogen and lead to its destruction.”

With Byrd’s previous findings about the necessity of the extracellular matrix and the essential role of CR3 as a receptor for beta-glucan, a featured paper was born. Byrd had compiled a rich explanation of the neutrophil reaction to hyphae: Choosing the ECM as the field of battle, they sense the infectious fungus, come together, spew their NETs to draw closer in and trap the fungus. Then they dismantle it with chemicals and enzymes.

Byrd, O’Brien, Reichner, and the team were the first to report the need for ECM and CR3 in NET formation as a response to a pathogen. The depth, thoroughness and complexity of the paper, Reichner said, is probably what earned it esteemed treatment in the journal.

“Every point was investigated to great lengths and in great detail,” Reichner said.

The Angel is in the details

Byrd acquired a desire for such detail when she would shadow her mom, a social worker, at homeless shelters around Jackson, Miss., where she grew up.

“I would see people in just very odd situations, clinically and mentally,” she said. “I remember not knowing how to help them except to give them my time and attention. That’s all I could offer. I didn’t understand the medical aspects. But I had the passionate desire to know more.”

That motivated her to study medicine. The obvious choice for college was Tougaloo College. The historically black college is a tradition in her family, but it also has a reputation as a small school with close relationships between faculty and students. It also has a nearly 50-year partnership with Brown University and an Early Identification Program for future study at the Warren Alpert Medical School.

Byrd’s first trip to Brown came through a Leadership Alliance-sponsored summer of research in the lab of Rena Wing, professor of psychiatry and human behavior, who studies weight control. A veteran of work at Tougaloo with the Jackson Heart Study, an ongoing investigation of cardiovascular disease among African Americans, Byrd helped Wing study the effects of long-term weight loss on cardiovascular disease in type 2 diabetes.

In 2008, after two years at the Alpert Medical School and two years in a lab that had to scale back, thereby orphaning her work, she joined Reichner’s lab. Her thesis will be done next year and then she’ll finish the last two years of medical school.

All this time she’s participated in a dizzying array of programs, internships, and scholarships, and won travel awards to speak at conferences all over the country (she also given a lot of time to speak to local youth groups and to help with events and programs at Ebenezer Baptist Church on Providence’s West Side).

Grateful for the myriad forms of support and mentorship she has received along the way (neither neutrophils nor graduate students succeed alone), Byrd said she wants to give back to kids in Mississippi by applying her clinical and research training to understanding type 2 diabetes and obesity down to its pathophysiology at the molecular level.

It’s the same combination of scientific curiosity and empathy that inspired her as a teenager in those homeless shelters. But now she’s a scientist: published, featured, and award-winning. Soon she’ll begin delivering the help she’s dreamed about since those days.