While astronomers now know that exoplanets are exceedingly common in the galaxy, the mechanics by which they are formed aren’t well understood. Planetary childhood remains a mystery.

Young stars start out with a massive disk of gas and dust that over time, astronomers think, either diffuses away or coalesces into planets and asteroids.

“The speculation is that as planets form they clear out a region of gas and dust around them, forming a telltale ‘gap’ in the disk”, said Stefan Kraus, from Physics and Astronomy at the University of Exeter.

Disks with fully cleared gaps have been observed before, but Kraus and his team have published results in the Astrophysical Journal suggesting that they may have found a system in an important in-between stage, where the recently formed planets still interact with the disk material.

The team’s target star, V1247 Orionis, was identified by a lack of emissions that indicated the presence of a gap in the dust disk. “This system has an inner dust disk, a big gap, and then an outer disk,” Kraus said.

Using the combined power of multiple telescopes, including the Keck telescopes in Hawaii and the VLT in Chile, Kraus and his colleagues peered into the gap between the two disks and were surprised by what they found. 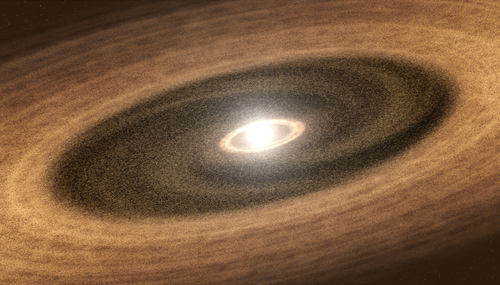 The formation of a baby solar system. Image credit: NASA/JPL-Caltech

“There was an unexpected amount of material in the gap,” Kraus said. “The formation has not cleared yet.”

The formation that Kraus observed is what he describes as “weird and complex” – a possibly spiral-shaped formation made of lumpy carbon dust. This formation may be the sign of planets forming and stirring up the dust disk as they collect material and clear out space in the disk.

Because Kraus’ team could not identify a single point in the dust gap, there could be several planets being formed in this baby solar system, gobbling up material and creating the unusually distorted formation that Kraus and his team observed.

The discovery sheds new light on planet formation and could help confirm that forming planets, as opposed to other forces, are responsible for the dissolution of a young star’s dust disk. “The only plausible explanation for this formation is that something – planets or maybe brown dwarfs – is clearing the region,” says Kraus.

Future observations in other wavelengths could help provide a better picture of what’s going on around V1247 Orionis — and even someday help astronomers see the objects that are creating the gap in its dust disk.