Scientists find key protein for algae growth in the ocean

Scientists have revealed a key cog in the biochemical machinery that allows marine algae at the base of the oceanic food chain to thrive. They have discovered a previously unknown protein in algae that grabs an essential but scarce nutrient out of seawater, vitamin B12.

Many algae, as well as land-dwelling animals, including humans, require B12, but they cannot make it and must either acquire it from the environment or eat food that contains B12. Only certain single-celled bacteria and archaea have the ability to synthesize B12, which is also known as cobalamin.

Studying algal cultures and seawater samples from the Southern Ocean off Antarctica, a team of researchers from Woods Hole Oceanographic Institution (WHOI) and the J. Craig Venter Institute found a protein they described as “the B12 claw.” Stationed at the algae’s cell walls, the protein appears to operate by binding B12 in the ocean and helping to bring it into the cell. When B12 supplies are scarce, algae compensate by producing more of the protein, officially known as cobalamin acquisition protein 1, or CBA1. The team reported their findings May 31 in Proceedings of the National Academy of Sciences. 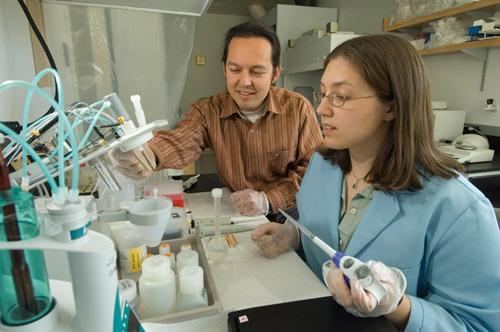 For her Ph.D. research in the MIT/WHOI Joint Program in Oceanography, Erin Bertrand (right) studied how marine phytoplankton get, use, and compete for nutrients in the ocean, working with her advisor, WHOI marine biogeochemist Mak Saito. His lab group has been working to advance techniques using proteomics to study critical proteins in the marine environment. (Photo by Tom Kleindinst, Woods Hole Oceanographic Institution)

Discovery of CBA1 illuminates a small but vital piece of the fundamental metabolic machinery that allows the growth of marine algae, which have critical impacts on the marine food web and on Earth’s climate. Via photosynthesis, marine algae draw huge amounts of carbon dioxide, a greenhouse gas, from the air, incorporating carbon into their bodies. The algae provide food that sets the food chain in motion. When they die or are eaten, some of the carbon ends up sinking to the ocean depths, where it cannot re-enter the atmosphere.

The discovery also opens the door for industrial or therapeutic applications. Since CBA1 is essential for marine algae growth, it could provide clues to how to promote growth of algae used to manufacture biofuels. Learning to manipulate the B12 biochemical pathways of beneficial or detrimental microbes could eventually lead to antibiotic or antifungal medicines. 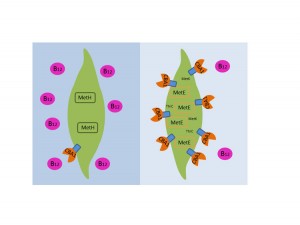 Cobalamin acquistion protein 1 (CBA1) appears to operate by binding vitamin B12 in the ocean and bringing it into algal cells, where the vitamin is needed to create another enzyme essential for growth, methionine synthase (MetH). However, when B12 supplies are scarce, algae produce more CBA1 to try to obtain more B12, and, as a back-up, some algae must resort to creating another enzyme, MetE, which can replace MetH but is far less efficient. (Erin Bertrand, Woods Hole Oceanographic Institution and J. Craig Venter Institute)

To discover CBA1, Erin Bertrand, a graduate student in the MIT/WHOI Joint Program in Oceanography, and her advisor, WHOI biogeochemist Mak Saito used an approach now common in biomedical research but only recently applied to marine science: proteomics, the study of the proteins organisms make to function in their environment and respond to changing conditions. Among thousands of other proteins present in the algae, they identified the novel CBA1 protein when it increased in abundance when the algae were starved of vitamin B12. They then worked with colleagues at the Venter Institute to demonstrate CBA1’s function and its presence in the oceans.

Bertrand, the study’s lead author, earned a Ph.D. from the MIT/WHOI Joint Program in Oceanography in September 2011 and is now a postdoctoral scientist at the Venter Institute. In addition to Saito, co-authors of the papers are Andrew Allen, Christopher Dupont, Trina Norden-Krichmar, Jing Bai and Ruben Valas of the Venter Institute. The research was funded by the National Science Foundation and the Gordon and Betty Moore Foundation’s Marine Microbiology Initiative program. 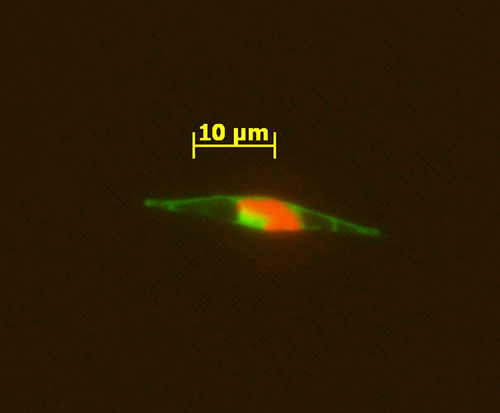 An epifluorescence micrograph of a marine alga indicates that the cobalamin acquisition protein 1 is associated with the outside of the cell wall, where it appears to facilitate bringing in vitamin B12 from the ocean into the cell. (Image courtesy of Chris Dupont, J. Craig Venter Institute)