Yale University researchers have found that a single molecule not only connects brain cells but also changes how we learn. The findings, reported in the December 9 issue of the journal Neuron, may help researchers discover ways to improve memory and could lead to new therapies to correct neurological disorders.

The junctions between brain cells over which nerve pulses pass — called synapses — are crucial for regulating learning and memory and how we think. Aberrations in the structure and function of synapses have been linked to mental retardation and autism, while synapses are lost in the aging brains of Alzheimer’s patients.

However, the mechanisms that organize synapses in the living brain remain a puzzle. Yale scientists identified one critical piece of this puzzle, a molecule called SynCAM 1 that spans across synaptic junctions.

“We hypothesized that this molecule might promote new synapses in the developing brain, but were surprised that it also impacts the maintenance and function of these structures,” said Thomas Biederer, associate professor of molecular biophysics and biochemistry and senior author of the study. “We can now define how this molecule supports the brain’s ability to wire itself.” 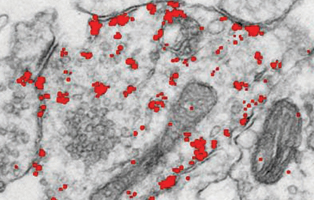 Red dots on electron micrograph show SynCAM molecules within a synapse between two brain cells. Yale researchers say the molecules acts as a sort of glue and is crucial to function of neurons. Image credit: Yale University

The Yale team focused on SynCAM 1, an adhesion molecule that helps to hold synaptic junctions together. They found that when the SynCAM 1 gene was activated in mice, more synaptic connections formed. Mice without the molecule produced fewer synapses.

When we learn, new synapses can form. However, the strength of synaptic connections also changes during learning, based on the amount of stimuli received — a quality scientists termed ”plasticity.” Together with a group in Germany led by Valentin Stein, the team was surprised to find that SynCAM 1 controls an important form of synaptic plasticity.

Unexpectedly, Biederer and colleagues also found that mice with high amounts of SynCAM 1 are unable to learn while mice lacking SynCAM 1 — and having fewer synapses — learn better. Apparently an excess of the molecule can be damaging. This builds on recent theories suggesting that having too many connections isn’t always better and that the balance of synaptic activity is crucial for proper learning and memory.

“Synapses are dynamic structures. It appears that SynCAM 1 ties synapses together; some of this molecule is needed to promote contact but too much glues down the synapse and inhibits its function. It may act a bit like a sculptor who helps give synapses their shape.” Biederer also said that the molecule is almost identical in mice and man, and likely has the same roles in human brains.

Other Yale authors on the paper are Elissa Robbins and Karen Perez de Arce.

The work was funded by the National Institutes of Health and the March of Dimes Foundation.