What Zen Meditators Don’t Think About Won’t Hurt Them

Zen meditation has many health benefits, including a reduced sensitivity to pain. According to new research from the Université de Montréal, meditators do feel pain but they simply don’t dwell on it as much. These findings, published in the month’s issue of Pain, may have implications for chronic pain sufferers, such as those with arthritis, back pain or cancer.

“Our previous research found that Zen meditators have lower pain sensitivity. The aim of the current study was to determine how they are achieving this,” says senior author Pierre Rainville, researcher at the Université de Montréal and the Institut universitaire de gériatrie de Montréal. “Using functional magnetic resonance imaging, we demonstrated that although the meditators were aware of the pain, this sensation wasn’t processed in the part of their brains responsible for appraisal, reasoning or memory formation. We think that they feel the sensations, but cut the process short, refraining from interpretation or labelling of the stimuli as painful.” 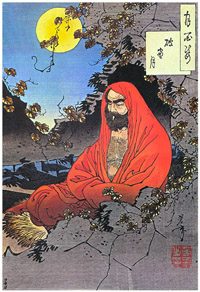 Rainville and his colleagues compared the response of 13 Zen meditators to 13 non-meditators to a painful heat stimulus. Pain perception was measured and compared with functional MRI data. The most experienced Zen practitioners showed lower pain responses and decreased activity in the brain areas responsible for cognition, emotion and memory (the prefrontal cortex, amygdala and hippocampus). In addition, there was a decrease in the communication between a part of the brain that senses the pain and the prefrontal cortex.

“Our findings lead to new insights into mind/brain function,” says first author, Joshua Grant, a doctoral student at the Université de Montréal. “These results challenge current concepts of mental control, which is thought to be achieved by increasing cognitive activity or effort. Instead, we suggest it is possible to self-regulate in a more passive manner, by ‘turning off’ certain areas of the brain, which in this case are normally involved in processing pain.”

“The results suggest that Zen meditators may have a training-related ability to disengage some higher-order brain processes, while still experiencing the stimulus,” says Rainville. “Such an ability could have widespread and profound implications for pain and emotion regulation and cognitive control. This behaviour is consistent with the mindset of Zen and with the notion of mindfulness.”

“A non-elaborative mental stance and decoupling of executive and pain-related cortices predicts low pain sensitivity in Zen meditators” was authored by Joshua A. Grant, Jérôme Courtemanche and Pierre Rainville from the Université de Montréal.