Right now, it looks a little like one of those plastic containers you might fill with gasoline when your car has run dry. But Scott Gallager is not headed to the nearest Mobil station. The Woods Hole Oceanographic Institution (WHOI) biologist has other, grander plans for his revolutionary Swimming Behavioral Spectrophotometer (SBS), which employs one-celled protozoa to detect toxins in water sources.

Not only is he working on streamlining the boxy-looking contraption—eventually even evolving it into a computer chip—but he sees it as a tool to potentially  “monitor all the drinking water in the world.

“It has a unique utility.”

The SBS has been selected as a 2010 “Better World” technology by the Association of University Technology Managers, which was recently published in the association’s Better World Report. 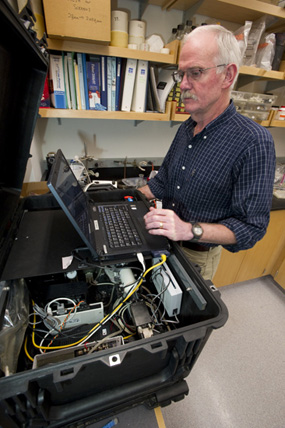 Not bad for a concept the U.S. Department of Defense (DOD) once put on the back burner for a year and a half before finally funding Gallager’s idea to detect toxins in water sources using the smallest of animals, the one-celled protozoa. Now, SBS may be on the cusp of providing unprecedented assessment of the world’s water supplies.

The groundbreaking technique works by introducing protozoa into small chambers with water samples taken from municipal, industrial, or military water sources and comparing them to control samples. Any alteration of the protozoa’s swimming mechanics is a sign that water conditions have changed and chemical or biological contaminants—pesticides, industrial chemicals, or biological warfare agents—may be present.

A camera records the protozoa’s swimming patterns, triggering software developed by Gallager and his colleagues that interprets the water’s risk. The device then relays color-coded, traffic light-type signals to the user: green (safe); yellow (check the water further for safety); red (bad or deadly—do not drink the water).

SBS’s big advantage is that it provides virtually instantaneous feedback on the water supply’s safety, Gallager says. “It’s a very rapid approach to providing a continuous monitoring for the potential presence of toxins,” he says.

Gallager hatched the plan along with former WHOI colleague Wade McGillis—now a professor at Columbia University’s Lamont-Doherty Earth Observatory—while examining the possible effects of climate change on microscopic plankton. Their premise was that protozoa, with their unique methods of propelling themselves through water, might act as barometers of the health of their local underwater environment.

After the 9/11 attacks in 2001, McGillis told Gallager that the Defense Department was interested in techniques for monitoring water supplies. Gallager submitted his protozoa proposal to DOD in 2002; “I didn’t hear back,” he said. “I literally forgot about it.”

The following year, he received an e-mail from the Defense Department. “It said, ‘How do you want us to transfer the funds?’ he recalled. “It was nearly a million dollars.”

Today Gallager is working on his brainchild for both WHOI and Petrel Biosensors Inc., a private company that has licensed the technology for further development and commercialization. The company is attempting to raise about $2 million to further develop and fine-tune the SBS.

“Other, existing water tests with this spectrum of activity take from 24 to 72 hours to generate results and can cost anywhere from $50 to $250 per test,” says Bob Curtis, Petrel’s chief executive officer. “We estimate that the SBS will perform real-time biological testing and provide nearly instant feedback for just $1 or $2 per test.”

Commercial applications for the technology include monitoring of industrial wastewater discharge, security and quality of drinking water supplies, and the potential testing of water sources associated with hydraulic fracturing, or fracking, in the oil and gas industry

Curtis says Petrel is developing a range of fully automated sensing instruments that include desktop, portable, and hand-held units. The company is finalizing a business plan and intends to raise $2 million in investment funding to develop initial SBS systems for commercial launch.

In his WHOI lab, Gallager works to refine and fine-tune the science responsible for those impressive statistics. He uses up to three types of protozoa depending on the project—for example, one type may be good for fresh water and another for brackish water.

The digital camera records the creatures’ movement at 30 frames a second. The software tracks the protozoa’s course in two and three dimensions and evaluates about 50 features of their paths—showing almost immediately if the organisms are spiraling out of control or careening erratically around the tank.

The results are compared to those of the control sample of distilled water, yielding a statistical analysis that “tells you if toxins are present,” Gallager says, setting off the red, yellow, or green warning light. Further analyses of the swimming patterns, along with the water’s acidity levels and other variables, can help scientists determine the presence of specific kinds of toxins, he says, including pesticides and heavy metals such as cadmium or mercury. The system includes controls to prevent the reporting of false-positive and false-negative results.

The tiny animals “replenish themselves” for long periods, Gallager says, so he needs to change the protozoa supply only about every two months.

“It’s not a solved problem yet,” Gallager says of the SBS system. “It needs a couple of more generations to size down.” But ultimately—after SBS has been streamlined and perfected–he envisions a worldwide, real-time monitoring network with “four or five units in every reservoir in the world.” At any given time, he says, “Somebody at a central location could be monitoring all drinking water world wide.”