A circular rainbow appears like a halo around an exploded star in this new view of the IC 443 nebula from NASA’s Wide-field Infrared Survey Explorer, or WISE.

When massive stars die, they explode in tremendous blasts, called supernovae, which send out shock waves. The shock waves sweep up and heat surrounding gas and dust, creating supernova remnants like the one pictured here. The supernova in IC 443 happened somewhere between 5,000 and 10,000 years ago.

In this WISE image, infrared light has been color-coded to reveal what our eyes cannot see. The colors differ primarily because materials surrounding the supernova remnant vary in density. When the shock waves hit these materials, different gases were triggered to release a mix of infrared wavelengths. 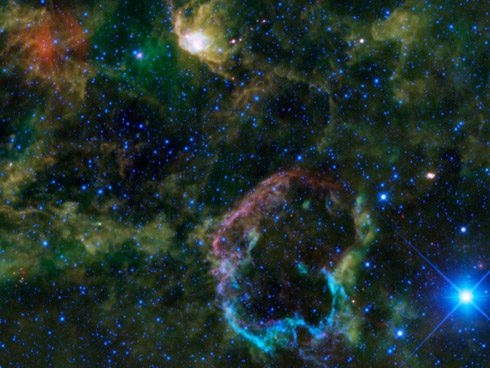 The supernova remnant’s northeastern shell, seen here as the violet-colored semi-circle at top left, is composed of sheet-like filaments that are emitting light from iron, neon, silicon and oxygen gas atoms and dust particles heated by a fast shock wave traveling at about 100 kilometers per second, or 223,700 mph.

The smaller southern shell, seen in bright bluish colors, is constructed of clumps and knots primarily emitting light from hydrogen gas and dust heated by a slower shock wave traveling at about 30 kilometers per second, or 67,100 miles per hour. In the case of the southern shell, the shock wave is interacting with a nearby dense cloud. This cloud can be seen in the image as the greenish dust cutting across IC 443 from the northwest to southeast.

IC 443 can be found near the star Eta Geminorum, which lies near Castor, one of the twins in the constellation Gemini.