COLUMBUS, Ohio – A preliminary look at an ice field atop the highest mountain in the eastern European Alps suggests that the glacier may hold records of ancient climate extending back as much as a thousand years.

Researchers warn, however, that the record may soon be lost as global warming takes its toll on these high-altitude sites, according to a new study in the Journal of Glaciology.

The glacier, Alto dell’Ortles, is the highest large ice body in the eastern Alps, reaching an altitude of 12,812 feet (3,905 meters) above sea level.  It is small, though, measuring barely 0.4 square miles (1.04 square kilometers), and only 10 percent of that is likely to hold a good climate record, the researchers said.

“This is a mountain that is very difficult to climb and that has probably prevented researchers and glaciologists from Europe from going up there to study the ice,” explained Paolo Gabrielli, a research scientist with the School of Earth Sciences and the Byrd Polar Research Center, both at Ohio State University.

“But it is an ideal observatory to have monitored climatic change in the region in the past as well as currently.” 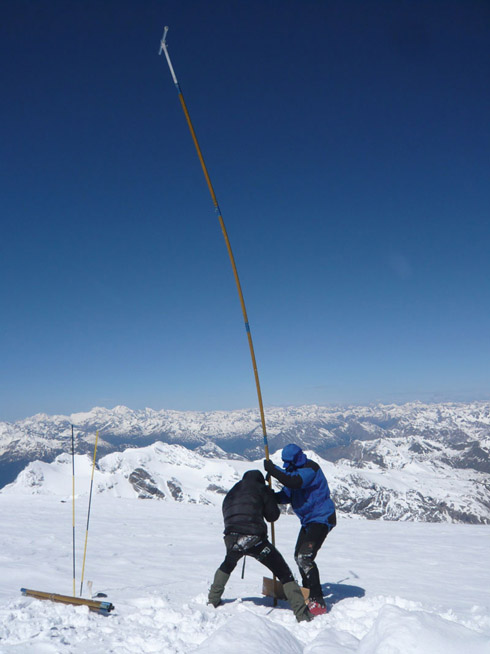 Above, researchers atop Mount Ortles in the eastern Alps are using a manual hand auger to drill a shallow core for later analysis. Below, they are installing an ablation stick, near a recently dug snow pit, to help in establishing the mass balance of the ice field. Image credit: Ohio State University 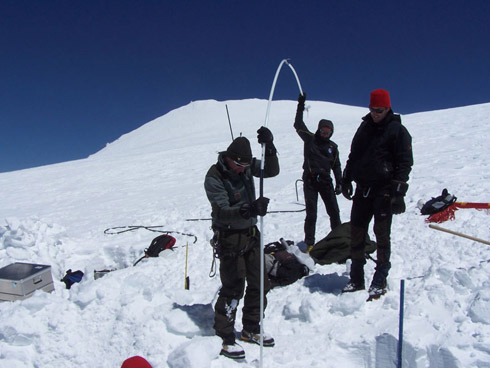 Scientists from Ohio State and five European universities made two exploratory visits to the glacier site in the summers of 2007 and 2008 and then, with logistical support from the Fire Protection and Civil Division of the Autonomous Province of Bolzano, used helicopters to carry the team to the site in 2009.

While there, the researchers drilled a shallow 10-meter core at the surface and dug snow pits to gauge how well the ice had been preserved over time.  Later analysis showed that while some surface melting had partially degraded the recent record, ice formed before 1980 is likely to be unharmed.

The team also used ground-penetrating radar to map the thickness of the glacier.  Based on that, they hope to be able to retrieve a 70-meter-long core through the ice to bedrock.  “There is a possibility that we could find ice reaching back 5,000 years, but that’s just speculation until we actually drill,” Gabrielli said.

The Ortles site is unique in the Eastern Alps, they say, since it offers the chance to reconstruct the human history of the region along with the past ecosystems and climate, and show, perhaps, the relationship between the three.

“We hope to find out how these three factors interacted.  We’d like to find evidence of whether climate conditions influenced the development of agriculture here, or even the start of primitive mining and smelting operations.  We may even be able to see indications in the ice record of when people came to the region,” he said.

Once full cores were retrieved, the ice samples would be analyzed for a host of climate signals, including oxygen isotope ratios, heavy metals, organic material, sulfates, chlorides, dust, pollen and volcanic ash that offer indications of past climate conditions.  That record would then be compared to records from other cores drilled from ice caps around the globe.

The research team has submitted a proposal to the National Science Foundation to support the planned drilling project.

“This is basically the only hope of finding a record of changing climate conditions at high elevations in this part of Europe,” he said, adding, “but unfortunately, time is running out to save this ice.”