Jay Winter, the Charles J. Stille Professor of History and editor of the recently published three-volume “Cambridge History of the First World War,” recently spoke to YaleNews about how WWI has impacted the 20th century, what lessons can be learned from the conflict, and the emergence of a global history of the so-called “Great War.” The following is an edited version of that conversation.

One of your areas of study is the remembrance of war in the 20th century, such as memorial and mourning sites. What led you to study this topic?

My mother’s family was wiped out in the Holocaust, and its shadow haunted my childhood. Writing about mourning practices in the aftermath of the First World War was an indirect way of confronting indirectly part of my childhood. 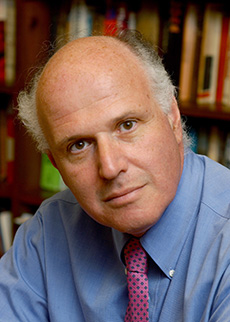 What lasting impact has World War I had on the 20th century?

The Great War, as the British term it, turned war from a killing machine into a vanishing act. Half of those who died in the war have no known graves — that is five million people. Hence, the cult of names emerged in the war, since all that is left of these people are their names. And that cult of naming after the 1914–1918 conflict has extended to the 6 million victims of the Holocaust, the names on Maya Lin’s Vietnam Veterans’ Memorial wall, the names of the “disappeared” in Latin America, and the names of those killed on 9/11. Here is but one way in which the Great War has shaped the last century and this one as well.

What lessons from WWI can we bring to present-day conflicts?

The first lesson is that war is a Pandora’s Box. Once opened, it cannot be contained.  Politicians are more inclined to overestimate their power to control the violence of war. The military know better, but frequently get trapped in wars that cannot be controlled or easily ended.

What new research led to the publication of “Cambridge History of the First World War”?

Since the 1980s, a group of historians have emerged who are “trans-national historians.” These are people who are born in one country, trained in another, and frequently at work in a third. Thus a national perspective on the war has given way to a comparative perspective, in which the state is not the focus of research. This has been productive, since the war was bigger than all of the states that waged it. It was truly global, and a global history of the war has emerged to reflect its revolutionary character.

As a scholar on the subject, what is especially meaningful to you about the 100th anniversary of World War?

The anniversary of the outbreak of the war has buried the word “celebration.” We don’t celebrate the war; to do so has a taste as of ashes. We see it as a global catastrophe, which opened the door to the Second World War and the Holocaust. Hence, commemorating the Great War necessarily has a pacifist character. No cause justified the slaughter of 10 million men and the mutilation of another 20 million.

What is on the horizon for research and scholarship about World War I?

The next phase of research is to shift the focus of study from Paris and Berlin to Warsaw and Istanbul, then known as Constantinople. The history of the Eastern front and the Middle Eastern upheavals associated with the war and its aftermath are still to be written.