ANN ARBOR, Mich.— Using the deepest X-ray image ever taken, a University of Michigan astronomer and her colleagues have found the first direct evidence that massive black holes were common in the early universe. This discovery from NASA’s Chandra X-ray Observatory shows that very young black holes grew more aggressively than previously thought, in tandem with the growth of their host galaxies.

By pointing Chandra at a patch of sky for over six weeks, astronomers obtained what is known as the Chandra Deep Field South (CDFS). When combined with very deep optical and infrared images from NASA’s Hubble Space Telescope, the new Chandra data allowed astronomers to search for black holes in 200 distant galaxies, from when the universe was between about 800 million and 950 million years old.

“We had reason to expect that black holes existed in many of the very first galaxies, but they had evaded our searches until now. When I compared Chandra’s data to my theoretical models I was stunned by their agreement. It’s the dream of any theoretician,” said Marta Volonteri, a U-M associate professor of astronomy and co-author of the study that appears in this week’s Nature. 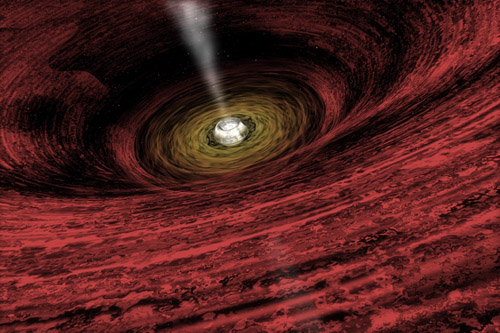 This is an artist's impression of a growing supermassive black hole located in the early universe, showing a disk of gas rotating around the central object that generates copious amounts of radiation. This gas is destined to be consumed by the black hole. Image credit: NASA/CXC/A.Hobart

“It appears we’ve found a whole new population of baby black holes,” said co-author Kevin Schawinski of Yale University. “We think these babies will grow by a factor of about a hundred or a thousand, eventually becoming like the giant black holes we see today almost 13 billion years later.”

A population of baby black holes in the early universe had been predicted, but not yet observed. Detailed calculations show that the total amount of black hole growth observed by this team is about a hundred times higher than recent estimates.

“Until now, we had no idea what the black holes in these early galaxies were doing—or if they even existed,” said Ezequiel Treister of the University of Hawaii, lead author of the study. “Now we know they are there and they are growing like gangbusters.” 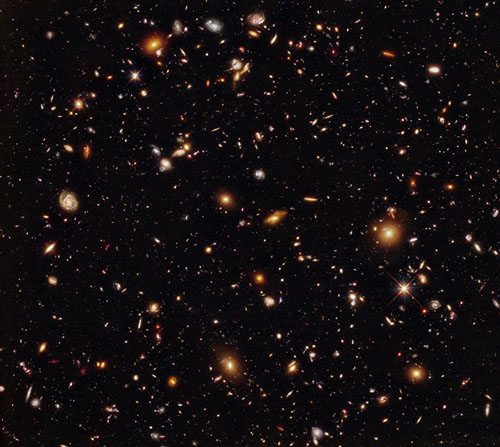 Because these baby black holes are nearly all enshrouded in thick clouds of gas and dust, optical telescopes frequently cannot detect them. However, the high energies of X-ray light can penetrate these veils, allowing the black holes inside to be studied.

Two critical issues in black hole physics are how the first supermassive black holes were formed and how they grow. Although evidence for parallel growth of black holes and galaxies has been established at closer distances, the new Chandra results show that this connection starts earlier than previously thought, perhaps right from the origin of both.

“Most astronomers think in the present-day universe, black holes and galaxies are somehow symbiotic in how they grow,” said Priya Natarajan, a co-author from Yale University. “We have shown that this codependent relationship has existed from very early times.”

It has been suggested that early black holes would play an important role in clearing away the cosmic “fog” of neutral (uncharged) hydrogen that pervaded the early universe when temperatures cooled down after the Big Bang. However, the Chandra study shows that blankets of dust and gas stop ultraviolet radiation generated by the black holes from traveling outwards to perform this “reionization.” Therefore, stars and not growing black holes are likely to have cleared this fog at cosmic dawn.

Chandra is capable of detecting extremely faint objects at vast distances, but these black holes are so obscured that relatively few photons can escape and hence they could not be individually detected. Instead, the team used a technique that relied on Chandra’s ability to very accurately determine the direction from which the X-rays came to add up all the X-ray counts near the positions of distant galaxies and find a statistically significant signal.

The title of the Nature paper describing these results is “Black hole growth in the early Universe is self-regulated and largely hidden from view.” The other co-author is Eric Gawiser from Rutgers University in New Jersey.