The War on Microbes

The outbreak of a new foodborne bacterial strain wreaking havoc in Germany is a reminder of the fast-changing nature of microbes and the dangers they pose to society. UA researchers are developing innovative strategies to fight emerging germs threatening the food and health-care industry.

The most recent outbreak of foodborne illness in Germany, which so far has infected more than 4,000 people and killed 36, serves as a reminder of the power microbes hold over humanity, in spite of scientific, medical and technological advances.

At the University of Arizona, several research teams in various disciplines are working toward improving food safety and developing new and effective weapons against an emerging breed of microbes that’s becoming increasingly resistant to conventional antibiotics. 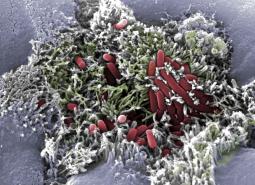 Like dust grains embedded in a fluffy carpet, EHEC bacteria (red) thrive in the intestines of humans and animals, where they attach themselves to the thread-like outgrowths of gut cells (green). (Photo courtesy of Maria A. Rendon/UA BIO5 Institute)

“Foodborne pathogens have been emerging for some time, and we can expect this to increase as the global produce market grows. Produce comes from all over the world these days,” said Charles Gerba, a world-renowned expert on microbial hygiene who is a professor in the UA’s department of soil, water and environmental science at the College of Agriculture and Life Sciences.

Gerba cautioned that an unusually serious outbreak of foodborne bacteria like the one in Germany could very well happen in the U.S., adding that with greater centralization of produce in certain locations at particular times of the year and a lack of requirements for source tracking, the risks increase.

“Microbes evolve very rapidly, and it is going to be a continuing battle to keep up with them as food production practices change,” Gerba said.

After weeks of investigations, testing of food samples and interviewing patients who had contracted a highly aggressive strain of Escherichia coli bacteria, dubbed O104:H4, the German health authorities were finally able to confirm sprouts as at least one of the sources of the outbreak. 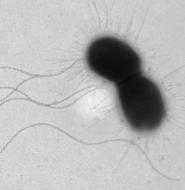 EHEC bacteria use hair-like structures help them move around and attach to the gut cells. The larger whip-like appendages snaking through this electron microscope image are known as flagellae. They enable the microbes to propel themselves. The bristly ones extending from the bacterial cells are pili, used for adhesion to the host cell. (Photo courtesy of Diana R. Hernandez/UA BIO5 Institute)

E. coli inhabit the guts of most animals, including humans, and most strains don’t cause disease, and some even are beneficial. O104:H4, however, startled health professionals with its unprecedented virulence, sending infected people to the hospitals in droves.

About 600 developed hemolytic uremic syndrome, or HUS, which includes life-threatening kidney failure and, in some cases, damage to the brain. O104:H4 is classified as an EHEC – short for entero-hemorrhagic, which translates to bloody diarrhea.

But what makes this particular strain so different from those known from previous outbreaks of foodborne illness?

“O104:H4 may be an interesting case of a microorganism acquiring genetic material from another bacterium,” said Scott Wilbur, a postdoctoral researcher in the lab of V. K. Viswanathan, an assistant professor in the UA’s department of veterinary science and microbiology who specializes in studying EHEC strains.

Wilbur added that most related strains do not cause serious disease in humans, but the strain in Germany has acquired a virulence gene that enables it to make Shiga-toxin. This small addition of genetic material resulted in the transformation of a non-pathogenic strain of E. coli into a strain that causes bloody diarrhea, and in some cases, HUS.

O104:H4 belongs to a subgroup of E. coli that usually cause symptoms only in people with a compromised immune system. This strain has also acquired resistance to some comonly used antibiotics.

“This is an example of evolution at work,” said Christopher Rensing, an associate professor in the UA’s department of soil, water and environmental science. “We tend to forget how easy it is for bacteria to get together inside the gut and exchange genetic material and acquire new traits very rapidly.”

“The O104:H4 strain is one of so-called emerging pathogens, and it’s coming up right now,” added Sadhana Ravishankar, an assistant professor in the UA’s department of veterinary science and microbiology. “Because of the bacteria’s ability to constantly change, there is no one-size-fits-all solution to prevent outbreaks from happening.”

Increasing food safety and reducing the risk of outbreaks is Ravishankar’s main research focus. Although her studies have concentrated on O157:H7, a different EHEC strain that was responsible for major foodborne outbreaks in the U.S., Ravishankar expects that its counterpart in Germany would react similarly to the preventive measures her team is investigating.

Together with Viswanathan, she just submitted a grant proposal to find new methods of increasing food safety in the context of known EHEC strains. One of the goals is to investigate how bacteria attach to the surfaces of leafy greens and whether they are able to get inside the plants.

“If they can, we have to ask whether the existing treatments are enough and whether we have to add measures,” Ravishankar said.

Ravishankar’s research has shown that simple measures can go a long way in lowering the risks. Her team recently submitted a publication showing that washing alone reduces bacteria on produce by up to 100 fold.

“Using plant extracts, we were able to reduce the bacterial load by over 1,000-fold,” Ravishankar said. “They were even better than hydrogen peroxide. The good thing about plant extracts is that you have that activity over time, they keep acting. Hydrogen peroxide works only momentarily.”

Applied in commercial settings, these measures could make a big difference, especially for organic growers, who are unable to treat their produce with high concentrations of certain chemicals like bleach.

According to Ravishankar, 1,000-fold reduction in bacterial contamination is a major step forward.

“In the real world, you won’t find 1 million disease-causing bacteria on a lettuce head. The pathogens are going to be present in smaller quantities compared with the background flora,” she explained. “A healthy individual should be able to tolerate some pathogenic cells. You would need to ingest at least between 100 and 1,000 cells to get sick. But small children or elderly people with compromised immune systems are at a higher risk. In children, as few as 10 cells can cause sickness.”

In a collaboration with Gerba, Ravishankar’s team is looking at what doses pathogens become a risk. Gerba’s team will develop a mathematical model based on the results obtained in the experiments of the Ravishankar lab.

“Let’s say you had so many cells on lettuce under certain conditions, what is the risk to consumers? Those are the kinds of questions we want to answer,” she said.

In another line of research, Ravishankar’s group is investigating how edible films made from plant parts can be used as wrappers or ingredients of bagged produce and meats.

The preliminary results are promising: Wrapping raw chicken meat in an edible apple film containing carvacrol, the active ingredient of oregano oil, effectively inactivated foodborne bacteria over a three-day storage, and the same substance reduced E. coli on spinach by about 1,000 fold.

“The longer the exposure, the more bacteria are killed,” Ravishankar said. “Because of the time-dependent action of these substance, they are ideal candidates for increasing food safety while the products are in transit to the consumer and during storage.”

Rensing pointed out that the microbes’ growing resistance to antibiotics calls for alternative and equally effective means of fighting them.

Research in Rensing’s lab involves innovative ways to prevent harmful microbes growing on surfaces. Recent trials showed that using copper alloy instead of stainless steel on touch surfaces in hospitals reduced the number of bacteria by 66 percent to 99 percent.

“Traditionally, hospitals have been using stainless steel because of its clean and sterile appearance,” Rensing said. “Copper, on the other hand, is far superior in terms of hygiene. It may begin to look a bit crummy over time, but we discovered it kills bacteria in less than a minute. On stainless steel, those same bacteria are still alive after 24 hours or more.”

In a collaboration between Ravishankar’s and Rensing’s lab, the researchers are evaluating how copper could help make foods safer. For example, Salmonella was inactivated within 10 minutes to 15 minutes on copper alloy surfaces.

“Jorge Fonseca, our collaborator at the UA Yuma Agricultural Center, has looked at cross-contamination of lettuce with coring tool or harvesting knife,” Ravishankar said. “If a harvester uses a contaminated tool, how many lettuce heads can it contaminate?”

To find out, Fonseca’s team cut 75 lettuce heads and analyzed them for bacterial contamination in the lab. Several lettuce heads, including number 75, the one cut last, were contaminated.

“What this means is that if you have one fecal spot in a field, for example from an animal dropping or contaminated irrigation water, that is enough to contaminate many rows of lettuce.”

This research shows that simple measures, such as replacing steel blades in harvesting knives and lettuce coring tools with copper would greatly lower the risk of contamination in produce.

“About 70 percent of produce in the U.S. is irrigated,” Gerba said, “but surprisingly little is known about the contamination of irrigation systems and the microbial quality of irrigation waters.”

In addition to developing new ways of preventing microbes from contaminating food and sensitive areas such as hospital settings, other research at the UA takes a closer look at the complex interactions between bacterial pathogens and their hosts.

Research in Viswanathan’s lab centers on pathogenic E. coli as a group. His team is starting a project to study EHEC in the Tucson area and from outbreaks in Arizona.

One recent finding came unexpected and offers a glimpse into the complex evolutionary relationships between host and microbe. Viswanathan’s team discovered that one strain of E. coli secretes a protein that is toxic to gut cells, but the bacteria also produces a second protein that counteracts the toxic effect of the first.

“This is an interesting process where the bacteria actually protect their host cells from damage,” Wilbur said. “From an evolutionary perspective, it makes sense for the microbes to not kill the very cells they’re living on.”

Taken together, “all those efforts just help reduce the burden of contamination and minimize exposure to germs,” Rensing said. “Microbes are everywhere on this planet, and they change constantly. This means we will never find a silver bullet, something that will prevent outbreaks once and for all.”