*Shanna Tellerman is on her game as CEO of BizSpark One startup Wild Pockets.*

REDMOND, Wash. — Wild Pockets, a BizSpark One startup, is building the future of open source gaming.

Shanna Tellerman had no intention of becoming the CEO of a high-tech company. In college, she was intent on pursuing a career in art. It wasn’t until she took a course that combined art and technology at Carnegie Mellon University that she had the idea that she could marry the two fields. While at Carnegie Mellon, Tellerman worked on a project that used video game technology as a training method for first responders in emergency situations. The result was a drag-and-drop user interface that let people set up almost any kind of firefighting scenario. Her solution was so easy to use that it quickly became popular with fire departments across the U.S.

“I saw how easily anyone could use the program,” Tellerman recalls, “and thought maybe there was a bigger idea there.” The result was the creation of a platform that lets people build 3-D content and share it with one another.

As with most entrepreneurs, Tellerman sought investors to help her company mature. Through one of her investors she made an early connection with Microsoft. “Relationships are a big part of my success with Wild Pockets,” she says. “It was a ‘wow’ experience for me when I was introduced to the Microsoft BizSpark program. Entrepreneurs don’t usually encounter large companies that just want to help them succeed. Microsoft did just that.” 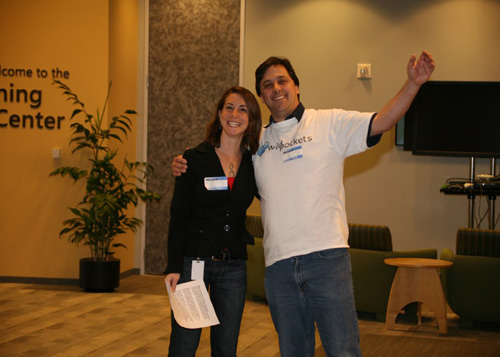 With Microsoft’s help, Tellerman and the Wild Pockets team created a series of Game Jams — events where small teams compete to create the best video game in 24 hours. Game Jams helped Wild Pockets spread its core message of democratizing game development, and it gave the startup something else: the ability to judge the growth and strength of the Wild Pockets platform.

“Some people had never programmed anything before, so to watch them build prototypes of complete games in just 24 hours was incredible,” says Tellerman. “We took the top games from each Game Jam and continued working with those teams to build them into complete, full-length games.”

Microsoft technologies are central to Wild Pocket’s success. “We’ve always used Microsoft technology for development and to host our services,” says Tellerman. “Microsoft’s strength in gaming is a strong cultural fit for us, and we see a lot of future opportunity driven by the Microsoft relationship.”

Looking ahead, Tellerman sees Xbox 360 and Windows games as prime areas of opportunity for developers. “It’s incredible how accessible game development is today,” says Tellerman. “Anyone — from small teams of just a few people to the largest gaming companies — can develop a game, get it out in the market and have huge success. From Xbox to Facebook to mobile devices, the opportunity to reach new audiences is tremendous.”

Supporting the Next Generation of Entrepreneurs

Future prospects for Wild Pockets aside, Tellerman continues to link back to her graduate project and the concept of helping others through her work. Teaching is a part of her soul in some ways, and she often speaks to women about the opportunities available in the high-tech field.

“There are a lot of reasons why female CEOs are less prevalent than male CEOs,” Tellerman acknowledges. “But the role of women in technology and as entrepreneurs is evolving. I hope that as girls see people like me succeeding in the industry they realize that they can do this too.”

Wild Pockets has built two summer program curricula for high school and middle school students, and numerous community colleges and universities have picked up Wild Pockets as a tool to use in the classroom. “It’s great to see schools teaching game development with our platform. I hadn’t anticipated that Wild Pockets would be used in educational environments.”

Then again, Tellerman never anticipated becoming the CEO of a high-tech company. “There’s a little bit of magic right at the beginning of starting a company when anything is possible. I can’t wait to see where that magic takes us.”