Using “random lasers” as a source of illumination in medical imaging equipment could improve both processing time and the clarity of the final images, according to new research by Yale University scientists.

The Yale researchers have engineered a special type of laser called a random laser — which generates and emits light differently from traditional lasers — to serve the same function without giving off speckle or other visual blight. They report their results online April 29 in the journal Nature Photonics.

“Our work is innovative and significant because we show that random lasers are much brighter than LEDs and light bulbs and also generate speckle-free images,” said Michael A. Choma, an assistant professor of diagnostic radiology, pediatrics, and biomedical engineering at Yale. He is one of the study’s principal investigators. 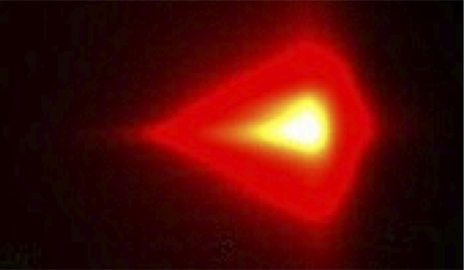 A traditional laser emits a single intense beam of light, known as a spatial mode. Photons from that single beam can be scattered by a sample under observation, resulting in random grainy background noise — speckle — on top of the desired image.

One way of mitigating the noise is to use many different spatial modes, such as the light emitted by a LED or light bulb. Unfortunately, these light sources are dim compared with lasers.

But random lasers offer the best of both worlds, according to the Yale researchers. They are bright, like lasers, while also having many modes, like a light bulb, so they generate speckle-free images. That is, random lasers are something akin to a light bulb with the intensity of a laser.

“Our random lasers combine the advantages of lasers and the white light sources, and may be used for a wide range of imaging and projection applications,” said Cao.

The light emitted by random lasers could also enable faster image generation. This would help researchers and clinicians better capture fast-moving physiological phenomena — the movements of embryo hearts, perhaps, or blood flow patterns in the eye — as well as broad swaths of tissue in less time than required by current technologies.

“Your light source really defines the boundaries of what you can do — how fast you can image,” said Choma. “And you always want to go faster.”

Random lasers could have applications in consumer electronics also, according to the researchers — in digital light projection systems, for example.

Within medical imaging, the introduction of random lasers could lead to improved microscopy and endoscopy, they said.

The scientists have produced a prototype random laser for use in imaging applications and are refining it.