*Windows Phone 7 goes on sale today at AT&T and T-Mobile stores throughout the United States. The phone takes a new approach to smartphone design, hopefully addressing some of the “Bad Mobile Phone Behavior” called out in a new survey released today.*

REDMOND, Wash. – Nov. 8, 2010 – The mobile phone, like the craftiest of invasive species, knows no boundaries. It has crept into every inch of our lives, and spotting one in the bathroom or the bedroom can only elicit a weary response: “Really?”

According to a new survey released today, the answer across the country is a resounding – if resigned – “Yes.” 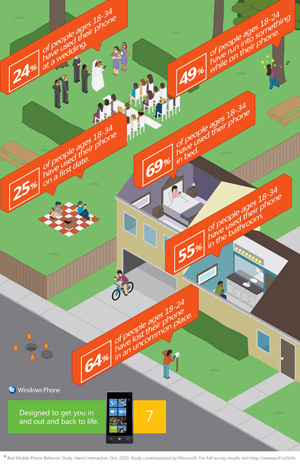 Microsoft commissioned Harris Interactive to survey adults on smartphone behavior. The results show that many people have done things like use a phone in a bathroom or while in bed. Image credit: Microsoft

The survey, commissioned by Microsoft and conducted by Harris Interactive, confirms we’re a country chock full of “Bad Mobile Phone Behavior.” Nearly three-quarters of adults rank poor phone etiquette in their top 10 pet peeves, the survey found, though only a fraction fessed up to such behavior themselves.

Starting today, those weary consumers might see a chance to curb bad phone behavior as Windows Phone 7 hits store shelves across the United States, introducing them to a phone designed to let users get important tasks done faster and alleviate some bad phone behavior through good smartphone design. The device went on sale in Europe and the Asia Pacific region in October.

AT&T and T-Mobile stores in the U.S. are now selling Windows Phone 7 devices, including the HTC Surround, Samsung Focus, and HTC HD7. The LG Quantum and Dell Venue Pro will appear in the coming weeks.

“Today is a big milestone for the company,” said Todd Peters, corporate vice president of the Mobile Communications Marketing Group. “It really speaks to our commitment to understanding what consumers want, and our resurrection in the mobile category.”

The phone is being launched into a crowded marketplace, but Microsoft hopes it stands out with features designed “to get you in, and out, and back to life,” Peters said. He said Windows Phone 7 is an antidote to poor smartphone design that keeps people fumbling with their phones as they walk down the block or sit down to dinner with family.

Smartphones are increasingly becoming a part of society, today’s survey found. “As a culture, we’ve come to crave this access to information, and smartphones give us access to everything at our fingertips,” Peters said. “Unfortunately, people are spending a lot of time with their heads down poking at their phones, creating fragmented attention and some questionable behavior in society.”

The primary objective of the Harris study was to determine the scope of that questionable behavior among U.S. adults, and the findings suggest it’s widespread. A few highlights: 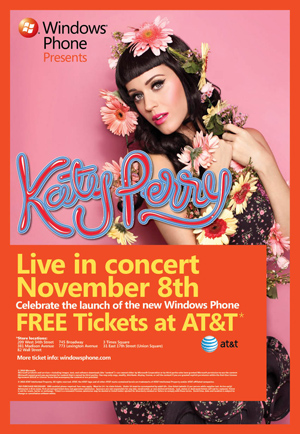 Katy Asher, Windows Phone marketing director for Microsoft, said the findings validate the behavior that Microsoft pokes fun at in its “Really” commercial. The ad, which has been viewed more than 2.4 million times on YouTube, depicts a series of extreme but all-too-common moments when people miss out or have mishaps because they are buried in their phones.

The ad has resonated with consumers, Asher said. More than 1,300 people have submitted their own “Really” stories on the Windows Phone 7 Facebook site, sharing tales of running into trees or missing bus stops because they were too distracted with their phones.

“Almost everyone who sees the ads admits at least one of the head-in-phone moments could happen to them or someone they know,” she said. “These are experiences we can all relate to. We wanted to surface that insight in a funny way and hold up a mirror, asking consumers if this is really how they want to interact with their phone. Do you really want to be that distracted person, or do you want to get what you need quickly and get back to life?”

The idea behind the advertising is to draw attention to the way we use our phones and then create an opening to introduce the benefits of better phone design, she said. “Windows Phone 7 is all about a fresh design that organizes all the stuff that people want to do with their phones in a different way.”

To continue with the fun and excitement of the ads, Microsoft worked with TV personality Rob Dyrdek and actress Minka Kelly on a launch event taking place today – the “Really Rally Road Trip.” Dyrdek and Kelly will be flying cross-country to take a look at Americans’ bad phone behavior and show off Windows Phone 7 features.

The pair will start their trip in New York, where Microsoft will be hosting a free concert featuring Katy Perry. Their adventure ends in San Francisco, where the band Maroon 5 will play another concert. Fans can get free tickets by stopping by participating AT&T stores.