Will This Be The End of Hamburger Disease? 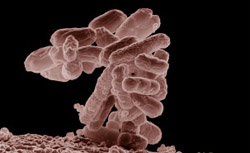 Hamburger disease, a debilitating form of food poisoning, may be a thing of the past. New findings from an international research collaboration conducted by the French National Institute for Agronomic Research (INRA), involving the Université de Montréal are the first to show how the contaminating E.coli bacterium is able to survive in the competitive environment of a cow’s intestine by scavenging specific food sources. Published in this month’s Environmental Microbiology, and featured in Nature Reviews Microbiology, this study may lead to non-medicinal methods for eradicating this invasive bug.

“We studied E.coli O157:H7, which is the most prevalent species of bacteria associated with larger outbreaks,” says Josée Harel, co-author of the study and director of the Groupe de Recherche sur les Maladies Infectieuses du Porc at the Université de Montréal’s Faculty of Veterinary Medicine. “These outbreaks have been associated with direct contact with the farm environment and with the consumption of meat, raw milk and dairy products. Reduction or eradication of O157:H7 in cows will lead to a substantial decrease in food contamination and consequential human infections.”

The intestine is a complex environment with a high number and diversity of bacteria. Most of these bugs are not harmful and many contribute to proper bowel function. However, your guts are a battleground for wars between these species as they engage in a struggle to obtain carbon, nitrogen and other energy sources. Those that win the battle for resources survive and multiply while the losers disappear.

Harel and her collaborators’ from France’s Institut National de la Recherche Agronomique and Lallemand Animal Nutrition, first step was to demonstrate that O157:H7 does in fact thrive in the bovine intestine. Once this was established, they went on to determine why these particular bacteria find the cow intestine such a great place to live. They found that O157:H7 is unusual because it can forage nitrogen from ethanolamine, a chemical present in the cow’s intestine.  Because other bacteria cannot process ethanolamine, O157:H7 has this source of nutrition to itself.  “The ability of O157:H7 to use ethanolamine as a source of nitrogen gives it the nutritional and competitive advantage to survive,” says Harel.

It is all in the genes

The final step for Harel and colleagues was to determine how O157:H7 was able to process the ethanolamine so it could be used as a nitrogen source. Genetic analyses revealed that 0157:H7 had specific genes that allowed it to do so.

“We now know that this bacteria has evolved a genetic program that allows it to process ethanolamine and therefore outcompete its neighbours and survive and multiply in the intestine,” says Harel. “This new-found knowledge will help us select appropriate feed or probiotics in an attempt to eliminate the food source of this contaminating bug. This in turn, should limit the spread of this bug into the food chain.”

Hamburger disease, otherwise known as haemolytic uremic syndrome, can occur after a person has been infected with the E. coli O157:H7. It can result in the destruction of cells that cause clotting of the blood and red blood cells. Kidney failure may result due to the damage of the small blood vessels and tubules in the kidneys. It usually affects children between the ages of 1 and 10 years, but may also occur in adults. HUS affects 2 to 4 people per 100 000 and occurs all over the world.

This study was funded by an EU project (ProjectSafeBeef) within the 6th Framework Program.