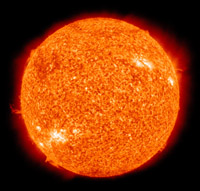 Angeles Duran, 49-year-old Spanish lady has claimed to be the owner of Sun. Woman from Spain’s soggy region of Galicia said that she registered the star at a local notary public as being her property after learning about the American man, who registered moon and most planets in our solar system as his property.

Here is an international agreement, which states that no country may claim ownership of a planet or star, but it says nothing about individuals, she added.

“There was no snag, I backed my claim legally, I am not stupid, I know the law. I did it but anyone else could have done it, it simply occurred to me first,” she told the online edition of Spanish daily newspaper El Mundo.

The document issued by the notary public declares Duran to be the “owner of the Sun, a star of spectral type G2, located in the center of the solar system, located at an average distance from Earth of about 149,600,000 kilometers,” Barcelona News reports.

According to AFP, Duran said she now wants to slap a fee on everyone who uses the sun and give half of the proceeds to the Spanish government and 20 percent to the nation’s pension fund.