Why Coffee Protects Against Diabetes

Coffee, that morning elixir, may give us an early jump-start to the day, but numerous studies have shown that it also may be protective against type 2 diabetes. Yet no one has really understood why.

Now, researchers at UCLA have discovered a possible molecular mechanism behind coffee’s protective effect. A protein called sex hormone–binding globulin (SHBG) regulates the biological activity of the body’s sex hormones, testosterone and estrogen, which have long been thought to play a role in the development of type 2 diabetes. And coffee consumption, it turns out, increases plasma levels of SHBG. 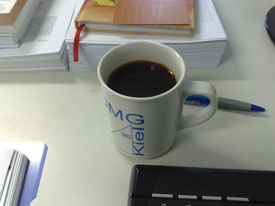 Reporting with colleagues in the current edition of the journal Diabetes, first author Atsushi Goto, a UCLA doctoral student in epidemiology, and Dr. Simin Liu, a professor of epidemiology and medicine with joint appointments at the UCLA School of Public Health and the David Geffen School of Medicine at UCLA, show that women who drink at least four cups of coffee a day are less than half as likely to develop diabetes as non-coffee drinkers.

When the findings were adjusted for levels of SHBG, the researchers said, that protective effect disappeared.

The American Diabetes Association estimates that nearly 24 million children and adults in the U.S. — nearly 8 percent of the population — have diabetes. Type 2 diabetes is the most common form of the disease and accounts for about 90 to 95 percent of these cases.

Early studies have consistently shown that an “inverse association” exists between coffee consumption and risk for type 2 diabetes, Liu said. That is, the greater the consumption of coffee, the lesser the risk of diabetes. It was thought that coffee may improve the body’s tolerance to glucose by increasing metabolism or improving its tolerance to insulin.

“But exactly how is elusive,” said Liu, “although we now know that this protein, SHBG, is critical as an early target for assessing the risk and prevention of the onset of diabetes.”

Earlier work by Liu and his colleagues published in the New England Journal of Medicine had identified two mutations in the gene coding for SHBG and their effect on the risk of developing type 2 diabetes; one increases risk while the other decreases it, depending on the levels of SHBG in the blood.

A large body of clinical studies has implicated the important role of sex hormones in the development of type 2 diabetes, and it’s known that SHBG not only regulates the sex hormones that are biologically active but may also bind to receptors in a variety of cells, directly mediating the signaling of sex hormones.

“That genetic evidence significantly advanced the field,” said Goto, “because it indicated that SHBG may indeed play a causal role in affecting risk for type 2 diabetes.”

“It seems that SHBG in the blood does reflect a genetic susceptibility to developing type 2 diabetes,” Liu said. “But we now further show that this protein can be influenced by dietary factors such as coffee intake in affecting diabetes risk — the lower the levels of SHBG, the greater the risk beyond any known diabetes risk factors.”

For the study, the researchers identified 359 new diabetes cases matched by age and race with 359 apparently healthy controls selected from among nearly 40,000 women enrolled in the Women’s Health Study, a large-scale cardiovascular trial originally designed to evaluate the benefits and risks of low-dose aspirin and vitamin E in the primary prevention of cardiovascular disease and cancer.

They found that women who drank four cups of caffeinated coffee each day had significantly higher levels of SHBG than did non-drinkers and were 56 percent less likely to develop diabetes than were non-drinkers. And those who also carried the protective copy of the SHBG gene appeared to benefit the most from coffee consumption.

And there’s bad news for decaf lovers. “Consumption of decaffeinated coffee was not significantly associated with SHBG levels, nor diabetes risk,” Goto said. “So you probably have to go for the octane!”

Other authors of the study included Brian Chen, of UCLA, and Julie Buring, JoAnn Manson and Yiqing Song, of Brigham and Women’s Hospital and Harvard Medical School. Funding was provided by the National Institutes of Health. No conflicts of interest were reported by the authors.