Whirlpools on the Nanoscale Could Multiply Magnetic Memory

“We spent 15 percent of home energy on gadgets in 2009, and we’re buying more gadgets all the time,” says Peter Fischer of the U.S. Department of Energy’s Lawrence Berkeley National Laboratory (Berkeley Lab). Fischer lets you know right away that while it’s scientific curiosity that inspires his research at the Lab’s Advanced Light Source (ALS), he intends it to help solve pressing problems.

“What we’re working on now could make these gadgets perform hundreds of times better and also be a hundred times more energy efficient,” says Fischer, a staff scientist in the Materials Sciences Division. As a principal investigator at the Center for X-Ray Optics, he leads ALS beamline 6.1.2, where he specializes in studies of magnetism.

The electron spins in a magnetic vortex all point in parallel, either clockwise or counterclockwise. Spins in the crowded core of the vortex must point out of the plane, either up or down. The four orientations of circularity and polarity could form the cells of multibit magnetic storage and processing systems. Image credit: Berkeley Lab

Fischer recently provided critical support to a team led by Vojtĕch Uhlíř of the Brno University of Technology in the Czech Republic and the Center for Magnetic Recording Research at the University of California, San Diego. Researchers from both institutions and from Berkeley Lab used the unique capabilities of beamline 6.1.2 to advance a new concept in magnetic memory.

“Magnetic memory is at the heart of most electronic devices,” says Fischer, “and from the scientist’s point of view, magnetism is about controlling electron spin.”

Magnetic memories store bits of information in discrete units whose electron spins all line up in parallel, pointing one way or the opposite to signify a one or a zero. What Fischer and his colleagues propose is multibit storage in which each unit has four states instead of two and can store twice the information.

The key is magnetic vortices – whirlpools of magnetic field – confined to tiny metal disks a few billionths of a meter (nanometers) in diameter. The electron spins are seeking the lowest possible energy; spins that point in opposing directions, antiparallel, cost energy. Thus the electrons line up with all their spins pointing in a circle, either clockwise or counterclockwise around the disk.

In the core of the vortex, however, where the circles get smaller and smaller and neighboring spins would inevitably align antiparallel, they tend to tilt out of the plane, pointing either up or down.

“So each disk has four bits instead of two – left or right circularity and up or down polarity of the core – but you must be able to control the orientation of each independently,” says Fischer.

Up, down, and around – taking control

Applying a strong, steady external magnetic field can reverse core polarity, but practical devices can’t tolerate strong fields, and they need faster switches. Previous researchers at the ALS had found that with weak oscillating magnetic fields in the plane of the nanodisk they could quickly nudge the core out of its central position and get the same result.

“Instead of a static field, you wiggle it,” Fischer explains. As the core is pushed away from the center of the disk, successive magnetic waves – changes in spin orientation – move the core faster and faster until its polarity flips to the opposite orientation.

The team used ALS beamline 6.1.2 to demonstrate, for the first time, that similar methods can control the circularity of the magnetic vortices.

In this case, the “wiggle” drives the core right off the edge of the disk. Once it’s expelled, the vortex collapses and reforms, with spins pointing in the opposite direction: clockwise instead of counterclockwise, or vice versa.

Beamline 6.1.2 specializes in soft x-ray transmission microscopy of magnetic states, which allowed the researchers to make direct images of how the strength and duration of the trains of electric and magnetic pulses affected the circularity of the vortex. They found that control depends on the disk’s geometry.

The disks were all tapered, with diagonal slices off their top surfaces that served to accelerate the core, once it started moving. But thickness and diameter were the important factors: the smaller the disk, the better.

“Thick” disks (30 nanometers) over a thousand nanometers in diameter were sluggards, taking more than three nanoseconds to switch circularity. But disks only 20 nanometers thick and 100 nanometers across could switch orientation in less than half a nanosecond. 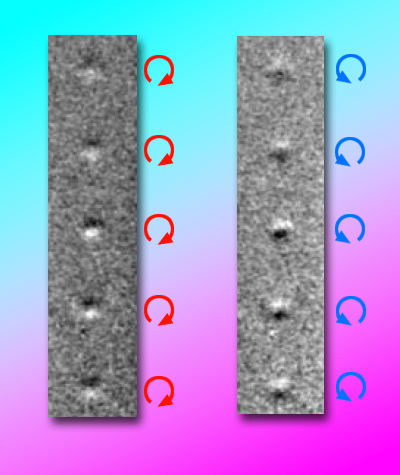 Magnetic transmission soft x-ray microscopy shows the reverse of spin circularity in magnetic vortices in a row of nanodisks, after applying a 1.5 nanosecond pulse of magnetic field. The change from left to right is not a change in lighting, as it may appear, but is instead due to changing magnetic contrast. Image credit: Berkeley Lab

“This is the scientific basis for possible applications to come,” says Fischer. “We are already looking at ways to control spin with temperature and voltage, at how to completely decouple spin from charge currents, and even at ways to couple chains of nanodisks together to build logic devices – not just for memory, but for computation.”

In Fischer’s opinion, the ALS’s soft x-ray microscopes tools are in the pole position for the race in magnetism research. “No method besides x-ray microscopy can provide similarly comprehensive information, both to identify the magnetic materials and to image the fastest dynamics of magnetic states on the nanoscale. The instruments we have are unique and serve the whole vortex community, world-wide.”

DOE’s Office of Science supports the ALS and, with the European Regional Development Fund and the Grant Agency of the Czech Republic, supported this research.