When Cells Hit the Wall: UCLA Engineers Put The Squeeze on Cells to Diagnose Disease

If you throw a rubber balloon filled with water against a wall, it will spread out and deform on impact, while the same balloon filled with honey, which is more viscous, will deform much less. If the balloon’s elastic rubber was stiffer, an even smaller change in shape would be observed.

By simply analyzing how much a balloon changes shape upon hitting a wall, you can uncover information about its physical properties.

Although cells are not simple sacks of fluid, they also contain viscous and elastic properties related to the membranes that surround them; their internal structural elements, such as organelles; and the packed DNA arrangement in their nuclei. Because variations in these properties can provide information about cells’ state of activity and can be indicative of diseases such as cancer, they are important to measure. 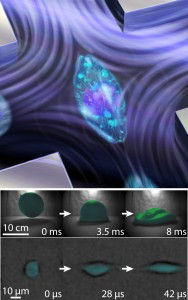 Artist's depiction of a cell being squeezed in a high-speed fluid flow (top). Mechanical properties can be gleaned by watching a water balloon hit a wall (middle) and a cell hit a wall of fluid (bottom). Image credit: University of California

UCLA bioengineering researchers have taken advantage of cells’ physical properties to develop a new instrument that slams cells against a wall of fluid and quickly analyzes the physical response, allowing for the identification of cancer and other cell states without expensive chemical tags.

The instrument, called a deformability cytometer, was developed by UCLA biomedical engineering doctoral students Daniel Gossett and Henry Tse and assistant professor of bioengineering Dino Di Carlo. It consists of a miniaturized microfluidic chip that sequentially aligns cells so that they hit a wall of fluid at rates of thousands of cells per second. A specialized camera captures microscopic images of these cells at a rate of 140,000 pictures per second, and these images are then automatically analyzed by custom software to extract information about the cells’ physical properties.

Other researchers had previously discovered that the physical properties of cells could provide useful information about cell health, but previous techniques had been confined to academic research labs because measuring the cells of interest could take hours or even days. With the deformability cytometer, the group can prepare samples and conduct an analysis of tens of thousands of cells within 10 to 30 minutes.

“Our system makes use of an approach that (U.S. Secretary of Energy) Steven Chu used to stretch DNA to, instead, stretch cells,” Di Carlo said. “This required us to engineer the fluid dynamics of the system such that cells always entered the stretching flow in the same place, making use of inertial focusing technology my group has been pioneering.”

With a system in place to measure the physical properties of cells at much higher rates, the bioengineers teamed up with collaborators across the UCLA campus to measure various cell populations of interest to biologists and doctors.

Along with UCLA stem cell biologist Amander Clark, an assistant professor of of molecular, cellular and developmental biology, Di Carlo’s team confirmed that stem cells that have the capability to become any tissue type stretch much less than their progeny, which are already in the process of becoming a particular tissue.

In collaboration with cytopathologist Dr. Jian Yu Rao, a professor of pathlogy and laboratory medicine at the David Geffen School of Medicine at UCLA, the team accurately detected cancer cells from pleural fluids using the high-speed deformability cytometer. Pleural fluid, which builds up around the lungs, is traditionally challenging to analyze because it contains a mixture of cell types — including immune cells, mesothelial cells from the chest wall lining and, potentially, low concentrations of cancer cells.

With Rao and Dr. Otto Yang, a professor in the infectious diseases division at the Geffen School of Medicine and the department of microbiology, immunology and molecular genetics, the researchers found that in addition to identifying cancer, the technique was also sensitive to states of acute and chronic inflammation in which populations of white blood cells are primed to respond to infection. Measuring the state of the immune system can aid in diagnosing immune disorders such as AIDS or in evaluating patients’ rejection of transplants early on, allowing doctors to modify anti-rejection therapies.

“The applicability to infectious diseases and organ transplantation is still theoretical,” said Yang, who is also a researcher with the UCLA AIDS Institute. “Immune cells change physical characteristics as they are activated, and so, in theory, this technology could be harnessed to detect immune responses against infections or transplanted organs.”

“Working with other folks across campus has been amazing,” Di Carlo said. “Anytime we talked with Amander, Otto or Jian Yu, we learned something new which helped us refine our system and the problems we chose to address. We all live in slightly different worlds, and sometimes communication is difficult, but bioengineering is great in that we can communicate in different languages and bridge the engineering school to medicine and biology much more effectively.”

The results were reported online in the journal Proceedings of the National Academy of Sciences of the USA and will be published in a forthcoming print issue of the journal. More information can be found at Di Carlo’s laboratory website.

The research was funded by a Young Faculty Award from the Defense Advanced Research Projects Agency (DARPA) and a Packard Foundation Fellowship for Science and Engineering.

Cytovale Inc., a spin-off out of UCLA Engineering assisted by the school’s Institute for Technology Advancement, is exploring first steps toward commercialization of the instrument.