What is Going to Happen to Cuba After Fidel?

In the coming days a historic event can happen in Cuba. The leader of the revolution, 84-year-old Fidel Castro is likely to leave the last of his posts as the leader of the Communist Party of Cuba.

According to a source in the Cuban party elite, the organization will be headed by the 79-year-old brother of the Comandante Raul Castro. So far, he served as the second secretary of the party. It is assumed that the legal registration of the changes in the party leadership will occur in April. At the same time it is not clear who will be the second secretary in place of Raul. There are no candidates among the relatives of the legendary brothers.

If the information is correct, perhaps the most legendary of the living politicians will resign from the public affairs. On January 1, 1959, after the overthrow of the dictator Fulgencio Batista, Fidel Castro became the head of the Liberty Island as the Prime Minister. He was the leader of the Communist Party since its inception in 1965. In 1976, the Prime Minister position was abolished, and Fidel became the chairman of the new supreme executive authority in Cuba – the State Council. 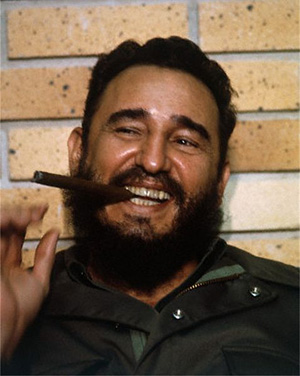 A smiling Fidel Castro with his trademark cigar in his mouth (September 29, 1974). Image source: Otto Bettmann/Wikipedia

Since then, the Comandante had been holding the reins of power in his hands. He became a symbol of the struggle against American hegemony. Experts estimate that he was the target of 637 assassination attempts, an absolute world record. Fidel built the only socialist state in the Western Hemisphere, which after the collapse of the Soviet bloc was experiencing hard times. In the past 20 years, Cuba has been living in great poverty, but did not abandon its socialist choice.

Rumors about Fidel’s health have always been abundant. Physician Marcelo Fernandes who escaped from the island claimed that the Commander was operated in Egypt in 1989. He was assisted with eliminating the effects of a brain hemorrhage and was diagnosed with colon cancer. In 2005, the CIA report released information that since 1998 Castro has been suffering from Parkinson’s disease. At least three times messages about Fidel’s death appeared – in 1986, 1994 and 2007, respectively. Every time the information was not correct.

Nevertheless, serious age-related health issues have surfaced. In late July of 2006, just three weeks before his 80th anniversary, Fidel was taken to a hospital. He underwent a complicated surgery on his intestines, and for some time the Comandante transferred the highest office to his brother Raul. In the fall of 2006 Fidel’s health became a state secret. Occasionally he appeared on Cuban television to prove he was still alive.

In early 2008, the impossible happened. Fidel announced that he decided to leave the post of the chairman of the State Council and Supreme Commander. The government was transferred into the hands of his brother Raul. As for Fidel, he occasionally addressed the public with commentary in the central organ of the Cuban press, “Granma.”

Over the next couple of years, only records of Fidel’s meetings with the leaders of various countries in Latin America were aired. His most frequent visitor was Venezuelan President Hugo Chavez. He was visited by other ardent anti-American politicians – Presidents of Bolivia (Evo Morales), Nicaragua (Daniel Ortega) and Ecuador (Rafael Correa). Fidel was also visited by more moderate politicians – former President of Brazil Luiz Inacio Lula da Silva and the acting head of Argentina Cristina Fernandez de Kirchner.

In summer of 2010 the Comandante for the first time in four years appeared on live television, where he talked about the American policy in the Middle East. Since then he has been giving interviews on the issues of domestic and foreign policy increasingly more frequently. His articles are being published. A week ago, he commented on the overthrow of the Egyptian President Hosni Mubarak: “The Egyptian people have scored an important goal: to overthrow the chief U.S. ally in the Arab world,” Fidel wrote.

However, while keeping abreast of the political events, the Comandante was not seeking to return to the senior government positions. Only the party leadership remained. Has Fidel indeed decided to leave? What will happen in Cuba now? In what direction will the country move? Deputy Director of the Institute of Latin American Academy of Sciences Boris Martynov commented on possible scenarios for Pravda.ru:

“Perhaps Fidel’s gradual shift from the government work can be considered a natural phenomenon, given his advanced age. Recently, the leader of the Cuban Revolution has clearly begun to deteriorate. This is evident from his not very adequate statements on the development of the country. However, this does not mean that he will not be “the singer behind the scenes” for some time.

As to where Cuba will move, the country may expect the market reforms. It remains a question in what form they will be conducted. Cubans are tired of semi-isolation and half-starved existence, they need modern products. Yet, strong gestures should not be expected from Raul. In the short term, I see that he will retain the relationship with leftists Latin American countries like Venezuela or Nicaragua.

The Cuban leadership at one time has seen enough of Russian restructuring, which resulted, from the viewpoint of many, in highly questionable results. They do not want to repeat similar events in their country. This is why the reforms they have been talking about for the last few years in fact have hardly begun. Havana is cautious about their implementation as it remembers the sad Soviet experience.

On the other hand, we should not expect that the Cubans will rise tomorrow, overthrow the Castro brothers and invite the Americans. Except for a very small group of dissidents, nobody wants that. Originally the Cuban revolution was not social but nationalistic, anti-American. Therefore, the future prospect for Cubans is the development of capitalism focused on the social needs with the former nationalist anti-American overtones”.

– By Sergei Balmasov and Vadim Trukhachev