What’s Happening with the Higgs Boson

Berkeley Lab scientists, major contributors to the ATLAS experiment at the Large Hadron Collider, explain what the excitement is about

CERN, the European Organization for Nuclear Research headquartered in Geneva, Switzerland, will hold a seminar early in the morning on July 4 to announce the latest results from ATLAS and CMS, two major experiments at the Large Hadron Collider (LHC) that are searching for the Higgs boson. Both experimental teams are working down to the wire to finish analyzing their data, and to determine exactly what can be said about what they’ve found.

“We do not yet know what will be shown on July 4th,” says Ian Hinchliffe, a theoretical physicist in the Physics Division at the U.S. Department of Energy’s Lawrence Berkeley National Laboratory (Berkeley Lab), who heads the Lab’s participation in the ATLAS experiment. “I have seen many conjectures on the blogs about what will be shown: these are idle speculation. Things are moving very fast this week, and it’s an exciting time at CERN. Many years of hard work are coming to fruition.”

Last December, not long after the LHC had shut down for the winter, ATLAS and CMS both reported slight excesses over background of two kinds of signals consistent with the expected signature of a Higgs boson. The LHC started running again at a higher energy this spring, and, says Hinchliffe, “In that short time we’ve already doubled the data. But even if both experiments were to confirm what they saw last year with new data, no one can be certain that it is the Higgs.”

Why can’t they know? And what’s a Higgs boson anyway?

Why particles have mass

A Higgs boson is an excitation – a fleeting, grainy representation – of the Higgs field, which extends throughout space and gives all other particles their mass. 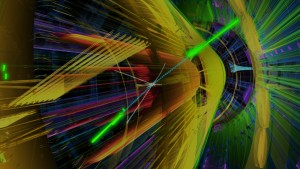 A simulation of the two-photon channel shows what ATLAS sees when the decay of a Higgs boson results in the production of two gamma rays. The blue beads indicate intermediate massive particles, and the bright green rods are the gamma-ray tracks. While the two-photon channel is the least likely Higgs decay, it is easier to observe than others with even noisier backgrounds. Image credit: Berkeley Lab

At the instant of the big bang, everything was the same as everything else, a state of symmetry that lasted no time and was immediately broken. Particles of matter called fermions emerged from the sea of energy (mass and energy being interchangeable), including quarks and electrons that would much later form atoms. Along with them came force-carrying particles called bosons to rule how they all were related. All had different masses – sometimes wildly different masses.

Using the concepts of a Higgs field and Higgs boson, the Standard Model explains why quarks, protons, electrons, photons, and a wide-ranging zoo of other particles have the specific masses they do. Oddly, however, the Standard Model can’t predict the mass of the Higgs itself. That will only be learned from experiment.

It will be far from simple to know when the Higgs has actually been found. Any particle that packs as much energy as the Higgs lasts only a miniscule fraction of a second before it falls apart into other particles, each with lower energy, and these fall apart into still lower-energy particles, finally leaving a set that ATLAS or CMS can see or infer. According to the Standard Model, the Higgs can decay by half a dozen different patterns of tracks, or channels.

The probability of each path varies. For example, there’s a low probability that a Higgs with mass equivalent to 100 billion electron volts (100 GeV) of energy would decay into a pair of W bosons, carriers of the weak interaction. Yet if its mass were 170 GeV, the probability of its decaying by that channel would be very high.

But earlier measurements, including those made last year at the LHC and at Fermilab’s Tevatron, have already excluded many possible masses for a Standard Model Higgs. Of the narrowing possibilities, the hints that ATLAS and CMS saw in 2011 were in the neighborhood of 125 or 126 GeV.

The two channels involved, called the two-photon channel and the four-lepton channel for short, are certainly not the most likely decay routes, says Beate Heinemann of Berkeley Lab’s Physics Division, who is also a professor in UC Berkeley’s Department of Physics. “The probability that a 125-GeV Higgs would decay into two gamma rays is about two tenths of one percent, and the likelihood that it would decay into four muons or electrons is even smaller.”

Finding the music in the noise

Background noise is the key. Even though the two-photon and four-lepton channels have a low probability, they are relatively free of noise from particle debris that obscures evidence of other channels. More probable routes for the decay of a Higgs with mass near 125 GeV would be to a bottom quark and antibottom quark, or a pair of W bosons, or a pair of tau particles, but all these are much harder to detect. 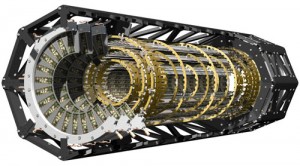 Heinemann, recently the Data Preparation Coordinator for ATLAS, says knowing what to look for is crucial. “Bunches of protons cross through each other 20 million times a second inside the ATLAS detector, with an average of 20 collisions at each crossing.” Electronic filters automatically cull the events to 100,000 per second of possible interest. Sophisticated software further reduces the cull to a few hundred events per second that are recorded and stored for later study. Says Heinemann, “We try to keep everything anyone can think of that might be interesting.”

The products of data reduction are colorful diagrams of spectacular sprays of particles from proton-proton collisions, recorded by the concentric layers of detectors that ATLAS wraps around the beam line. What makes the diagrams so intricate and precise begins in the Inner Detector, largely designed and built at Berkeley Lab, as was much of the filtering and sifting hardware and software.

“The LHC produces far more particles per collision than any accelerator before it. Not confusing them requires finer granularity and finer resolution, which means many more detector elements close to the beam,” says Murdock “Gil” Gilchriese, who headed the Berkeley Lab group that worked on the ATLAS Inner Detector.

The very heart of ATLAS is a pixel detector consisting of 80 million tiny silicon rectangles 50 microns (millionths of a meter) wide and 400 microns long, each connected to its own electronics – many millions of transistors bathed in the most intense radiation an accelerator has ever produced.

“About 20 percent of the ATLAS collaboration comes from the U.S.,” says Heinemann, “and one of the largest contingents is from Berkeley Lab, many of us in key positions. For example, Kevin Einsweiler, who led the ATLAS pixel project, is currently ATLAS’s Physics Coordinator, guiding analysis of the data. Michael Barnett has long held the post of Outreach Coordinator. At any given time we may also have 10 students and 10 postdocs working on ATLAS. There are a lot of us, and much of the time many of us are on the job at CERN.”

Whatever news comes out of CERN in the wee hours of the morning on July 4, hints and indications so far are just the beginning of the search to pin down the Higgs and learn its characteristics. The Higgs search commences a long voyage of discovery into a realm of unexplored physics, of supersymmetry, dark matter, miniature black holes, extra dimensions of space – and other, unanticipated wonders that defy prediction.