COLLEGE PARK, Md. –– A University of Maryland scientist and an undergraduate Indian student he mentored in India have uncovered a major new finding about El Nino — the cyclical climate event that appears every 2-7 years, sometimes with major global weather impacts such as massive flooding in some regions and severe droughts in others and resulting major economic impacts.

Just published in Nature Climate Change, their research reveals a previously unrecognized sign of a looming El Nino that can be detected up to 18 months in advance, nine months earlier than current forecasting models allow. Raghu Murtugudde, a UMD professor of atmospheric and oceanic science, and Nandini Ramesh, who was an undergraduate student at the Divecha Centre for Climate Change, Indian Institute of Science in Bangalore India when this research was performed, say their new clue to the beginning of an El Nino lies in the discharge of massive volumes of sub-surface warm water from the equatorial western Pacific Ocean north of Australia. 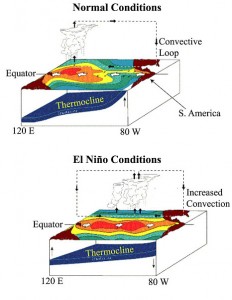 “Our new study shows that during the time between two El Ninos warm waters accumulate below the surface at that point in the Pacific and then begin to discharge towards the west nearly 18 months before the December-January appearance of a new El Nino when surface warming occurs at the International Dateline [the imaginary line that separates two consecutive calendar days and sits on the 180º line of longitude in the middle of the Pacific Ocean],” says Murtugudde.

“We found that this immaculate conception of El Nino with a gestation period of 18 months remains identical for all flavors [types] of El Nino and appears to be the most fundamental process that drives El Ninos,” he says. Scientists have known for four decades that El Nino events appear when waters in the tropical eastern Pacific start to warm up. However researchers have struggled to understand the early steps in this process even as they have watched three significant shifts, or flavors, in El Ninos during the past 40 years, with the latest occurring since 2000. This newest flavor of El Nino has its warmest waters in the central-equatorial Pacific Ocean near the International dateline, rather than in the eastern-equatorial Pacific. Recent research suggests these El Ninos appear to be becoming more common and progressively stronger, and many scientists think this shift is a consequence of global warming.

“We know that to see the future for a how a particular El Nino will develop, you have to look below the surface,” says Michael McPhaden, a Seattle-based scientist with the National Oceanic and Atmospheric Administration, who has been called “Mr. El Nino”. “This study emphasizes that whatever flavor of El Nino we may encounter — and there appear to be more than one — the key to understanding and predicting El Nino is to continuously measure the cold, dark, and remote interior of the tropical Pacific Ocean. At face value, its paradoxical that to anticipate the rains (or lack thereof) in Texas, you have to look months earlier at temperatures 300 feet below the surface of the Pacific 10,000 miles away. Nature is that way though,” says McPhaden, who oversees an array of Pacific Ocean monitors that send real-time readings used for monitoring, understanding and forecasting El Nino and La Nina. 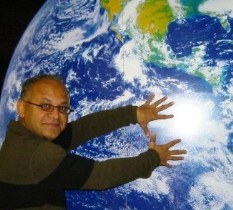 The new findings by Ramesh and Murtugudde were published online on June 24 in the journal Nature Climate Change. The work was conducted by Ramesh under Murtugudde’s close guidance while both were at the Divecha Centre for Climate Change of the Indian Institute of Science, she as an undergraduate student and he as a visiting professor on sabbatical from UMD. For this study, they examined El Nino events from1958 through 2011 to try to identify any climate factors present in all of them. They found that although not all El Nino events follow the same course, they all begin with a discharge of massive volumes of sub-surface warm water from the equatorial western Pacific.

“This is an exciting result that provides a new paradigm for understanding and predicting El Ninos and for understanding the impact of global warming on El Ninos,” says Murtugudde. “It has the potential for offering a way forward to predict El Nino with a significant lead time of over a year and also provides a caution against simple models that use statistical approaches of surface expressions of El Nino to make El Nino predictions.” Further research, he adds, is clearly needed to understand what processes are responsible for initiating the warm water discharge below the surface so far in advance of the mature phase of the El Nino.

Surface water temperature changes over world’s largest body of water have a profound effect on weather patterns around the globe, by causing a shift in the strength and position of the storm tracks around the Earth. The U.S. Climate Prediction Center recently gave a 50 percent chance that El Nino conditions will develop during the second half of 2012. These new UMD-led findings could allow future predictions to become more accurate and provide much longer advance warning.