Eleven regions of the human genome have been newly discovered to influence the onset of Alzheimer’s disease. The findings stem from the largest international study ever conducted on this disorder, which causes gradual memory loss and other forms of cognitive decline in older people.

As of 2009, 10 genes were known to be related to Alzheimer’s, the result of about a quarter-century of research. Yet the reasons behind individual susceptibility or resistance to the disease continued to be poorly understood.  In February of 2011, four international research groups studying Alzheimer’s disease genetics united to more quickly identify other genes related to the disorder.

The latest findings from the effort, called the International Genomics of Alzheimer’s Project, are being published in the journal Nature Genetics and were publicly released Oct. 27.

By analyzing genetic and epidemiological data from 74,076 older Alzheimer’s patients and unaffected individuals, participating from 15 countries, researchers found the 11 new genes associated with Alzheimer’s, alongside those genes already known, and located 13 other suspected genes, whose impact on Alzheimer’s risk has yet to be confirmed. 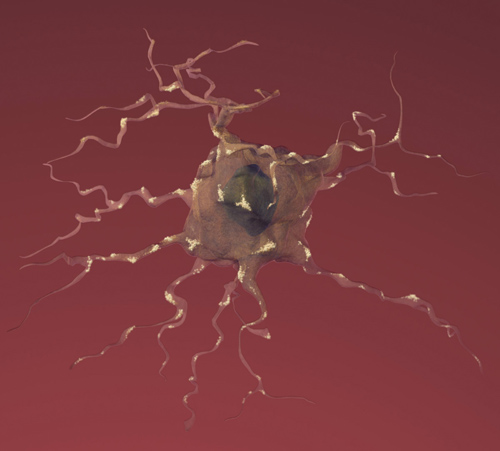 An artist’s rendition of nerve cell in the brain showing the ravages of Alzheimer’s disease. Image credit: National Institute of Aging

Several UW scientists and their research teams, though not leading the study, were part of the worldwide collaborative effort to understand how this devastating disease originates, and who might be susceptible.  Genes help point to the underlying biochemical mechanisms for a disease. The hope is that such basic biological findings will suggest approaches to prevent and treat Alzheimer’s.

One of the most significant links in this study was found in an area of the human genome long associated with the immune response, and points to a suspected immune component in Alzheimer’s.  This same region of the human genome has also been attached to other neurodegenerative diseases, such as multiple sclerosis, which is thought to be, at least in part, an autoimmune disorder.

For many years scientists have realized that Alzheimer’s is characterized by the damaging buildup of amyloid precursor protein and tau protein in brain cells, and some of the newly discovered genes are indeed related to amyloid and tau production.  The newly found genes also confirm other aspects of Alzheimer’s pathology noted in previous research, including genes involved in inflammation, cell migration, and lipid transport in nerve cells.  The genes also lend support to newer hypotheses on how a variety of different brain cells might malfunction in Alzheimer’s.

The UW was one of 145 academic medical centers around the world adding expertise to the study. Its participating scientists, who come from a variety of fields,  included Joshua Bis, Bruce Psaty, Annette Fitzpatrick, Paul K. Crane, Debby Tsuang, Eric B. Larson, Duane Beekly, Thomas Montine and Walter Kukull.