Using a recently developed biomarker of aging known as an epigenetic clock, UCLA researchers working closely with a German team of investigators have found for the first time that obesity greatly accelerates aging of the liver. This finding could explain the early onset of many age-related diseases, including liver cancer, in people who are obese.

Although it had long been suspected that obesity ages a person faster, it hadn’t been possible to prove the theory until now, said study first author Steve Horvath, a professor who holds joint appointments in human genetics at the David Geffen School of Medicine at UCLA and in biostatistics at the UCLA Fielding School of Public Health. The research, conducted with Jochen Hampe of the University Hospital Dresden, showed that carrying excessive weight can negatively affect certain tissues in the body.

“This is the first study that evaluated the effect of body weight on the biological ages of a variety of human tissues,” Horvath said. “Given the obesity epidemic in the Western world, the results of this study are highly relevant for public health.” 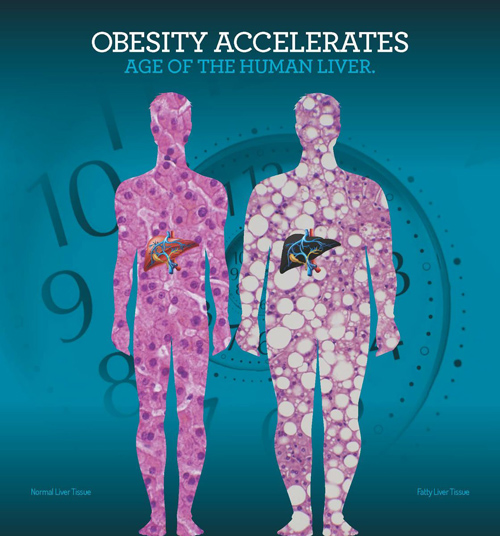 Obesity increases the age of liver. The patterns of the figures provides a microscopic view of liver cells from lean (left) and obese subjects. Image Courtesy of Steve Horvath

The findings appear online in the peer-reviewed journal Proceedings of the National Academy of Sciences.

The epigenetic clock, which Horvath developed last year, uses a previously unknown time-keeping mechanism in the body to accurately gauge the age of various human organs, tissues and cell types. He and his collaborators focused on a naturally occurring process called methylation, a chemical modification of the DNA molecule.

Horvath used the clock to measure the biological age of several tissues, and it proved accurate in matching biological to chronological age in leaner people. But liver tissues from obese people tended to have a higher biological age than the researchers expected.

For example, a woman who is 5-foot-5 and weighs 140 pounds has a BMI of 23.3. A woman of the same height who weighs 200 pounds has a body mass index of 33.3. The study found that her liver would be about three years “older” than that of the lighter woman.

“This does not sound like a lot, but it is actually a very strong effect,” Horvath said. “For some people, the age acceleration due to obesity will be much more severe, even up to 10 years older.”

Horvath also found that rapid weight loss induced by bariatric surgery did not reverse the accelerated aging, at least in the short term.

Going forward, Horvath and his team want to determine if the premature epigenetic aging of liver tissue in obese people can be prevented, which might help reduce their risk for diseases like diabetes and liver cancer. The researchers plan to work on models that allow them to determine the exact molecular mechanisms behind this aging process — which are not known at this point — in order to find targets for therapy and prevention.

“The increased epigenetic age of liver tissue in obese individuals should provide insights into common liver-related comorbidities of obesity, such as insulin resistance and liver cancer,” the study states. “These findings support the hypothesis that obesity is associated with accelerated aging effects and stresses once more the importance of maintaining a healthy weight.”

The study was funded by the National Institutes of Health (NIA/HIH 5RO1AG04511-02), the Virtual Liver Network, the Christian-Albrechts-University Kiel and the University Hospitals Schleswig-Holstein and Dresden in Germany.