By using tiny liquid lenses that self-assemble around microscopic objects, a team from UCLA’s Henry Samueli School of Engineering and Applied Science has created an optical microscopy method that allows users to directly see objects more than 1,000 times smaller than the width of a human hair.

Coupled with computer-based computational reconstruction techniques, this portable and cost-effective platform, which has a wide field of view, can detect individual viruses and nanoparticles, making it potentially useful in the diagnosis of diseases in point-of-care settings or areas where medical resources are limited. 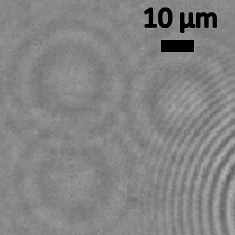 Electron microscopy is one of the current gold standards for viewing nanoscale objects. This technology uses a beam of electrons to outline the shape and structure of nanoscale objects. Other optical imaging–based techniques are used as well, but all of them are relatively bulky, require time for the preparation and analysis of samples, and have a limited field of view — typically smaller than 0.2 square millimeters — which can make viewing particles in a sparse population, such as low concentrations of viruses, challenging.

To overcome these issues, the UCLA team, led by Aydogan Ozcan, an associate professor of electrical engineering and bioengineering, developed the new optical microscopy platform by using nanoscale lenses that stick to the objects that need to be imaged. This lets users see single viruses and other objects in a relatively inexpensive way and allows for the processing of a high volume of samples.

“This work demonstrates a high-throughput and cost-effective technique to detect sub–100-nanometer particles or viruses over very large sample areas,” said Ozcan, who is also a member of the California NanoSystems Institute and holds a faculty appointment in the department of surgery at the David Geffen School of Medicine at UCLA. “It is enabled by a unique combination of surface chemistry and computational imaging.”

Using the nano-lens microscope. (A) The experimental setup. (B) Numerical model and scanning electron microscope images of the bead only, and bead-nano-lens configuration. (C) Steps of the sample preparation. Image credit: University of California (Click image to enlarge)

At scales smaller than 100 nanometers, optical microscopy becomes a challenge because of its weak light-signal levels. Using a special liquid composition, nanoscale lenses, which are typically thinner than 200 nanometers, self-assemble around objects on a glass substrate.

A simple light source, such as a light-emitting diode (LED), is then used to illuminate the nano-lens object assembly. By utilizing a silicon-based sensor array, which is also found in cell-phone cameras, lens-free holograms of the nanoparticles are detected. The holograms are then rapidly reconstructed with the help of a personal computer to detect single nanoparticles on a glass substrate.

The researchers have used the new technique to create images of single polystyrene nanoparticles, as well as adenoviruses and H1N1 influenza viral particles.

While the technique does not offer the high resolution of electron microscopy, it has a much wider field of view — more than 20 square millimeters — and can be helpful in finding nanoscale objects in samples that are sparsely populated. 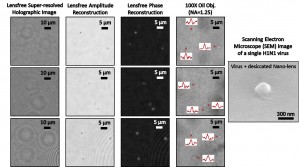 The research is published online in the journal Nature Photonics.