UCLA life scientists provide important new details on how climate change will affect interactions between species in research published online May 21 in the Journal of Animal Ecology. This knowledge, they say, is critical to making accurate predictions and informing policymakers of how species are likely to be impacted by rising temperatures.

“There is a growing recognition among biologists that climate change is affecting how species interact with one another, and that this is going to have very important consequences for the stability and functioning of ecosystems,” said the senior author of the research, Van Savage, an assistant professor of ecology and evolutionary biology and of biomathematics at UCLA. “However, there is still a very limited understanding of exactly what these changes will be. Our paper makes progress on this very important question.”

Climate change is causing global increases in mean temperature, as well as more fluctuations and greater variability in temperature. Growing evidence suggests these changes are altering when and how species interact, and even which species are able to interact without going extinct, Savage said.

Already, climatic warming is rapidly altering the timing and rate of flowering in plants, as well as breeding and migration in animals — changes that are likely to disrupt interactions between species.

“These changes may bring about novel and potentially unstable species interactions by causing warm-adapted species to seek out geographic regions and to experience seasonal periods that have historically been too cold for them until temperatures begin to rise,” said lead author Anthony Dell, a former UCLA postdoctoral researcher now at Germany’s University of Gottingen. 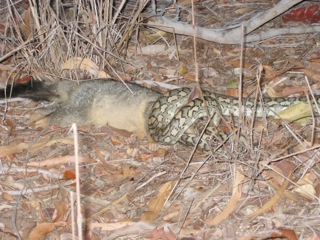 Feeding relationships within natural ecosystems, such as this python capturing a juvenile possum, will be altered by climate change, life scientists report. This could have significant impacts for the survival of species and the stability of ecosystems. Image credit: Anthony Dell

Such changes could destabilize entire ecosystems, such as rainforests or coral reefs, said co-author Samraat Pawar, a former UCLA postdoctoral researcher currently at the University of Chicago, who noted that although biologists are becoming increasingly aware that changes in species interactions are likely to be one of most important biological impacts of climate change, they have found it challenging to understand and predict.

Savage’s research team has recently made significant progress on this front by developing a biotraits database. This massive dataset has been compiled from the literature and has been standardized and organized so that data can be combined and compared. This group has already used statistical analysis and mechanistic mathematical models to provide information on how various biological traits of organisms respond to changes in temperature and other environmental factors.

In particular, Savage and his team have looked at the impact temperature changes can have on the rate at which an organism uses energy, known as the metabolic rate. This fundamental process governs many aspects of an organism’s life, including how much food it will eat, how fast it can move, how much it sleeps and how fast its heart beats. The team makes predictions about how an organism’s activity — and thus the broader ecology — are affected by temperature.

In the current research, Savage and his colleagues examined how organisms’ different physiological responses to rising temperatures could impact what are known as consumer–resource interactions. These are interactions between two organisms that lead to a “feeding” event — a prime example being a predator (consumer) and its prey (resource). Taken as a whole, a collection of consumer–resource interactions constitutes the food chain or food web that drives the diversity, dynamics and stability of particular communities and ecosystems.

Their model accounts for the fact that a change in temperature is likely to result in some predators becoming better at capturing prey while some prey animals become more efficient at evading capture, leading to imbalances in the food chain and potential repercussions for ecosystems.

A key biological trait driving different responses to temperature change among consumers and resources is body velocity — the speed at which an animal moves. Cold-blooded animals, for example, tend to move faster as their body temperature increases. The biologists predict that one of the primary impacts of global warming will be increasing the amount of time and speed with which organisms move around a landscape and thus encounter and interact with one another.

Specifically, the researchers say, the effects of climatic warming will be determined by the ways in which predators seek their prey — by moving around the landscape in search of mobile prey (active-capture), by remaining stationary and waiting for moving prey (sit-and-wait) or by moving around in search of immobile prey (grazing) — as well as by whether interacting predator–prey species are both cold-blooded, both warm-blooded or one of each.

Because of the effect of temperature on body velocity, biologists predict that encounter rates between predators and prey will increase with rising temperatures if the foraging strategy is active-capture (both predator and prey moving through the landscape), as with an eagle hunting a fish. However, if both species respond to temperature in identical ways, these changes may not lead to significant shifts in their interactions.

With a sit-and-wait strategy, often used by snakes and lizards, the effects of temperature change would arise primarily via the moving prey species, potentially creating a very strong asymmetry between predator and prey. In this case, the asymmetry may profoundly alter the nature of the interaction, so that the two species have much higher or lower abundances and may no longer be able to coexist in the feeding relationship without one or both going extinct.

Using the biotraits database, the authors show that trait-specific asymmetries exist in organisms’ responses to temperature change and are likely to be a major factor in determining the effects of climate change on species interactions.

Naturally, the researchers say, it is impossible to study all the species on the planet, but with their new mathematical model, predictions can be made about effects of warming on different types of consumer–resource interactions.

“The large diversity of species that make up natural ecosystems mean it is logistically infeasible to study every species interaction in a community and make predictions about how these interactions will be affected by climate warming,” Savage noted. “However, models that assume all species respond to temperature in the same way will both miss the large diversity in ecological systems and therefore miss the most important consequences that arise from differential and asymmetric responses to temperature among species.”

“In this paper we forge a middle ground between these two extremes,” Dell said. “We allow different species to have different thermal responses and show this is essential for predicting species responses to climate change, while also having our categories be much broader than every species on the planet. This new model can help form the foundation for a more predictive framework for understanding the effects of climate change on communities and ecosystems.”

The research was federally funded by the National Science Foundation (grant DEB 1021010.)