A new global assessment helps scientists explain why genetically modified crops have suppressed some pests for longer than a decade, while others adapted in a few years.

Since 1996, farmers worldwide have planted more than 1 billion acres (400 million hectares) of genetically modified corn and cotton that produce insecticidal proteins from the bacterium Bacillus thuringiensis, or Bt for short.

Bt proteins, used for decades in sprays by organic farmers, kill some devastating pests but are considered environmentally friendly and harmless to people. However, some scientists feared that widespread use of these proteins in genetically modified crops would spur rapid evolution of resistance in pests.

A team of experts at the University of Arizona has taken stock to address this concern and to figure out why pests became resistant quickly in some cases, but not others.

Bruce Tabashnik and Yves Carrière in the department of entomology at the College of Agriculture and Life Sciences, together with visiting scholar Thierry Brévault from the Center for Agricultural Research for Development, or CIRAD, in France, scrutinized the available field and laboratory data to test predictions about resistance. Their results are published in the journal Nature Biotechnology. 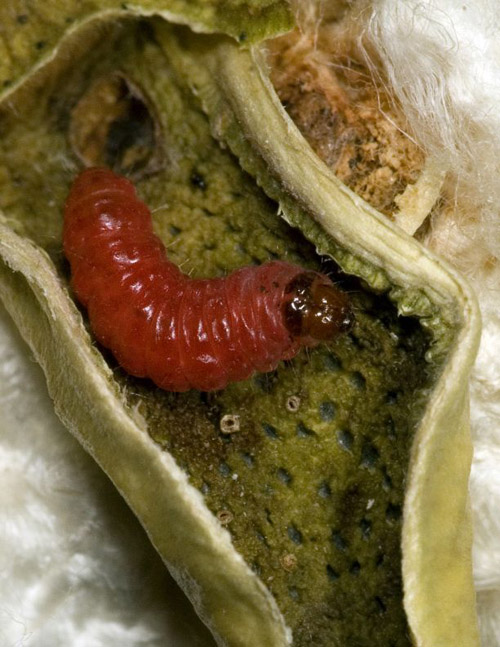 A pink bollworm caterpillar emerges after devouring the seeds within a cotton boll. This devastating pest quickly evolved resistance to genetically modified cotton in India, but not in the Southwestern United States where a coordinated resistance management program has been in place since the biotech crop was introduced in 1996. (Photo by: Alex Yelich/The University of Arizona)

“When Bt crops were first introduced, the main question was how quickly would pests adapt and evolve resistance,” said Tabashnik, head of the UA department of entomology who led the study. “And no one really knew; we were just guessing.”

“Now, with 1 billion acres of these crops planted over the past 16 years, and with the data accumulated over that period, we have a better scientific understanding of how fast the insects evolve resistance and why.”

Analyzing data from 77 studies of 13 pest species in eight countries on five continents, the researchers found well-documented cases of field-evolved resistance to Bt crops in five major pests as of 2010, compared with only one such case in 2005. Three of the five cases are in the United States, where farmers have planted about half of the world’s Bt crop acreage.

Their report indicates that in the worst cases, resistance evolved in two to three years, but in the best cases, effectiveness of Bt crops has been sustained more than 15 years.

According to the paper, both the best and worst outcomes correspond with predictions from evolutionary principles.

“The factors we found to favor sustained efficacy of Bt crops are in line with what we would expect based on evolutionary theory,” said Carrière, explaining that conditions are most favorable if resistance genes are initially rare in pest populations; inheritance of resistance is recessive – meaning insects survive on Bt plants only if have two copies of a resistance gene, one from each parent – and abundant refuges are present. Refuges consist of standard, non-Bt plants that pests can eat without ingesting Bt toxins.

“Computer models showed that refuges should be especially good for delaying resistance when inheritance of resistance in the pest is recessive,” explained Carrière.

Global status of field-evolved pest resistance to Bt crops: Of the 24 cases analyzed, five showed resistance that caused reduced efficacy of Bt crops (red), five were intermediate levels of resistance (orange and yellow) and 14 showed either little or no resistance (blue and green). Image courtesy of Nature Biotechnology (Click image to enlarge)

Planting refuges near Bt crops reduces the chances that two resistant insects will mate with each other, making it more likely they will breed with a susceptible mate, yielding offspring that are killed by the Bt crop. The value of refuges has been controversial, and in recent years, the EPA has relaxed its requirements for planting refuges in the U.S.

“Perhaps the most compelling evidence that refuges work comes from the pink bollworm, which evolved resistance rapidly to Bt cotton in India, but not in the U.S.,” Tabashnik said. “Same pest, same crop, same Bt protein, but very different outcomes.”

He explained that in the Southwestern U.S., scientists from the EPA, academia, industry and the USDA worked with growers to craft and implement an effective refuge strategy. In India, on the other hand, the refuge requirement was similar, but without the collaborative infrastructure, compliance was low.

One of the paper’s main conclusions is that evaluating two factors can help to gauge the risk of resistance before Bt crops are commercialized. “If the data indicate that the pest’s resistance is likely to be recessive and resistance is rare initially, the risk of rapid resistance evolution is low,” Tabashnik said. In such cases, setting aside a relatively small area of land for refuges can delay resistance substantially. Conversely, failure to meet one or both of these criteria signifies a higher risk of resistance.

When higher risk is indicated, Tabashnik describes a fork in the road, with two paths: “Either take more stringent measures to delay resistance such as requiring larger refuges, or this pest will probably evolve resistance quickly to this Bt crop.”

Kongming Wu, director of the Institute for Plant Protection at the Chinese Academy of Agricultural Sciences in Beijing, said, “This review paper will be very helpful for understanding insect resistance in agricultural systems and improving strategies to sustain the effectiveness of Bt crops.”

Fred Gould, professor of entomology at North Carolina State University, said, “It’s great to have an up-to-date, comprehensive review of what we know about resistance to transgenic insecticidal crops.”

Although the new report is the most comprehensive evaluation of pest resistance to Bt crops so far, Tabashnik emphasized that it represents only the beginning of using systematic data analyses to enhance understanding and management of resistance.

“These plants have been remarkably useful and in most cases, resistance has evolved slower than expected,” Tabashnik said. “I see these crops as an increasingly important part of the future of agriculture. The progress made provides motivation to collect more data and to incorporate it in planning future crop deployments. We’ve also started exchanging ideas and information with scientists facing related challenges, such as herbicide resistance in weeds and resistance to drugs in bacteria, HIV and cancer.”

But will farmers ever be able to prevent resistance altogether? Tabashnik said he doesn’t think so.

“You’re always expecting the pest to adapt. It’s almost a given that preventing the evolution of resistance is not possible.”