Election season is to politics-watchers as tax season is to accountants. There are polls to follow, debates to dissect and political ads to analyze.

For Kate Kenski, an associate professor in the University of Arizona communication department and School of Government and Public Policy, election season provides a wealth of data that she analyzes to write and teach about public opinion and political communication.

For the 2012 election, Kenski is keeping a keen eye on whether the frequent explanations for wins and losses in previous campaigns hold true for this campaign. Will the economy be the determining factor? Or will candidate personality or message strategy tip the campaign in one candidate’s direction over the other’s?

Kenski’s current research includes tracking the message consistency of the presidential candidates and examining how that consistency is related to the candidates’ standings in the polls. 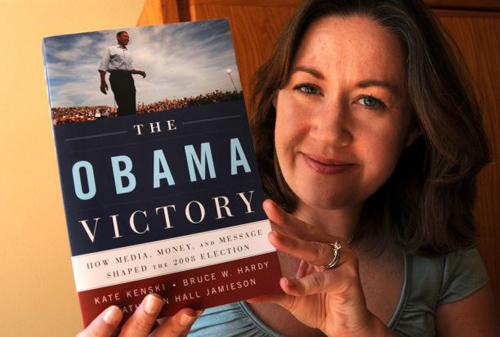 Kate Kenski, a faculty member in the UA communication department, has spent her career investigating and analyzing elections. The 2012 election season is no exception. (Photo by Norma Jean Gargasz/UANews)

The role of social media, especially Twitter, also is a topic that Kenski and doctoral student Bethany Conway are tracking this election, namely how Twitter is being used by the followers of each candidate, and how both parties are using social media to influence the messages of the other side.

Democratic President Barack Obama has a head start in this area. He has more than 30 million likes on Facebook and 20 million followers on Twitter. Not only is he known for revolutionizing the role of social media in politics in the 2008 campaign, as the acting president, he has a wider presence and followers from all over the world.

By contrast, Republican candidate Mitt Romney has approximately 9 million likes on Facebook and 1.4 million Twitter followers. The current data on Romney’s and Obama’s Facebook pages indicates they both have approximately 2.5 million people “talking about this,” suggesting that Romney has just as many engaged fans as Obama.

“We’ll have to see whether Romney is able to get as much bang for the buck being in these various networking sites as Obama has,” said Kenski. “It may be the case that the political effects of social media are indirect, influencing campaign and media agendas rather than persuading citizens about candidate preference.”

Where social media are a relatively new addition to political campaigning, political humor has been a staple in newspapers, magazines and stump speeches for many years. Shows like “The Colbert Report” and “The Daily Show with Jon Stewart” have built their success on humor and political gaffes.

Kenski has built her career on analyzing elections, especially presidential elections. Prior to coming to the UA in 2005, she was a senior analyst at the Annenberg Public Policy Center at the University of Pennsylvania and a member of the National Annenberg Election Survey, or NAES, team in 2000 and 2004. Also, Kenski served as a consultant to the NAES in 2008.

In her acclaimed 2010 book, “The Obama Victory: How Media, Money, and Message Shaped the 2008 Election,” written with colleagues Kathleen Hall Jamieson and Bruce W. Hardy, Kenski examined NAES data from more than 57,000 voters to help discern Obama’s path to victory. The researchers concluded that Obama’s 2008 victory was the result of a balance between consistent and effective messaging, media use and campaign spending.

Currently, Kenski is examining how partisanship affects citizens’ enjoyment of humorous political messages and whether Republicans and Democrats use humor in the same way.

“We tend to give our preferred candidate a pass when he or she is misleading or makes a gaffe, but we do not show the same generosity to the other side when they make errors,” Kenski said.

“Through experiments that we are conducting later this month, my research assistant Corey Pavlich and I are extending this idea to better understand the boundaries of the effects of political humor on citizens,” she said.

In less than a month’s time, the election will be over, and Kenski will be able to take a breather before diving into the mounds of polling data waiting to be analyzed.

”The ways in which candidates convey their ideas and the norms for discussing politics are rapidly changing,” Kenski said.

“The study of political communication in general and presidential campaigns specifically is important because it seeks to uncover what strategies work at a pragmatic level, while also revealing whether or not such strategies live up to our ideals.”

– By Lori Harwood and Drew Miller