Lian-Ping Wang, professor of mechanical engineering and joint professor of physical ocean science and engineering at the University of Delaware, recently published an invited critical review paper in the 2013 volume of the Annual Review of Fluid Mechanics, a high impact journal for the fluid mechanics community.

Co-authored with Wojciech Grabowski, a senior scientist from the National Center for Atmospheric Research (NCAR), the paper, titled “Growth of Cloud Droplets in a Turbulent Environment,” addresses a classic cloud physics problem of how cloud turbulence affects the growth of tiny cloud droplets.

According to Wang, only recently can researchers study this question quantitatively and systematically using advanced computational research tools and fine-scale instrumentation.

In the paper, Wang and Grabowski summarize convincing evidence that air turbulence can significantly enhance the growth of cloud droplets by collision-coalescence, the merging of two droplets into one larger droplet. More importantly, it points to a large number of open issues where further research is needed to understand the formation and dynamics of cloud droplets central to the water cycle, regional weather and global climate. 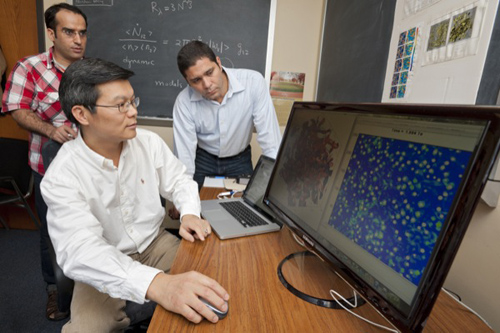 Wang explains that atmospheric clouds dominate the visual appearance of Earth when viewed from space. Whereas visible clouds may extend over distances up to hundreds of kilometers, individual water droplets in a cloud are typically only 10 to 40 microns in diameter, where one micron equals one millionth of a meter.

The dynamics of individual droplets is governed by small-scale turbulence, sedimentation and inertial effects caused by the extreme density contrast between the water and the air, says Wang. This contrast causes the droplets to take a very different trajectory in comparison to the local air motion.

The phase transformation between water vapor in the air and the liquid water in the droplets, taking place at the droplet scale, introduces bulk buoyancy effects that drive cloud-scale motion of 100 meters and larger.

Wang and Grabowski began studying these complex multiscale and multiphase problems more than a decade ago, prior to the cloud physics community’s broad acceptance of the quantitative impact of cloud turbulence on warm rain formation. Today, new parameterizations developed by Wang, Grabowski and their students motivate researchers to study from different perspectives the interactions of turbulence and inertial particles.

“With expected advances in the area of extreme-scale computing and possibilities to measure processes at the cloud microscales, we are optimistic that a more complete quantitative understanding will emerge in the near future and allow increasingly refined simulation of weather and the climate at regional and global scales,” Wang says.