ANN ARBOR — One of the casualties of the 1994 Rwandan genocide was the culture’s storytelling tradition. Resurrecting it has been the mission of a project called Stories for Hope for the past four years.

Now 99 narratives—conversations between youths and elders—will go on exhibit at the newly built Rwandan National Archives, which were decimated during the violence. On Oct. 12, the archives open again for the first time in nearly two decades.

Stories for Hope was founded by a University of Michigan Ph.D. alumna and psychologist who joined forces with an archivist from the U-M School of Information. In a style similar to StoryCorps, the project lets a Rwandan young person invite an elder to have an audio-recorded dialogue to learn more about the elder’s personal past, Rwanda’s history or its culture.

Rwandan facilitators encourage elders to tell stories that underscore their strength and resilience, as a way to help young people find positive pathways forward, project founders say. The conversations are in native language and translated later into English.

The genocide was the impetus for the project. But it’s not the only topic of the conversations within it. 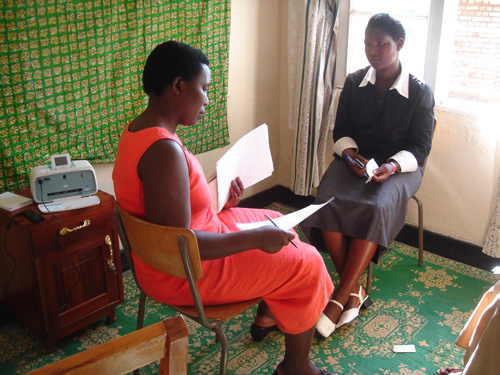 Mukakayange Veronique trains Stories for Hope facilitator Kakuze Josiane. Stories for Hope Rwanda is a storytelling project that brings young people and elders together to talk about the past as a way to break the silence between generations that has fallen since the genocide. Photo Courtesy of Patricia Pasick

“Participants are free to talk about the genocide and often do, but that’s not the sole purpose,” said David Wallace, a lecturer and research investigator at the School of Information. “Most of the silences between the generations can be laid at the door of the genocide.

“Elders became unwilling to open the vault of their personal pasts for fear of inflicting painful stories. Young people sensed those fears and withheld their questions. A pact of silence grew up around most any story about the past.”

Questions about family and work history, marriage practices and Rwandan culture are as common as questions about the genocide, says Patricia Pasick, project founder and Ann Arbor resident. She remembered a young woman who seemed nervous before a session with an uncle. Pasick braced for a difficult debriefing after her dialogue.

“It turns out she had a simple question,” Pasick said. “She wanted to get married to a young man and she needed to ask her uncle how she could possibly get married if the young man didn’t have a cow to give to her family. She feared she could never marry him because he was so poor. The uncle said, ‘That was then…you can go along with your wedding.'” 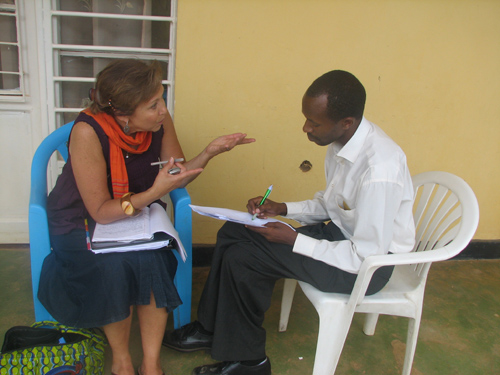 Patricia Pasick, founder of Stories for Hope talks about the project with Kanamugire Theophile, director of a local NGO in Nyamata, Rwanda. Photo courtesy of Patricia Pasick

In other stories: A widowed mother tells her son for the first time who his father was, how they became estranged and how he died. But she encourages him to ask more questions and reassures him that the genocide won’t happen again.

A father tells his son how his life went off track, from alcohol, and how he hid the family in a forest during the genocide to resist joining a killing group. The son was immensely relieved. He had assumed his father was a perpetrator.

A young man tells a friend how he was hurt both physically and emotionally when a neighbor he knew well threw a grenade at him. He encourages his friend to share her own story. Participating in Stories for Hope eventually led the young man to visit the neighbor in prison 15 years later after the attack. The two reconciled.

“They come together in a cloistered sanctuary,” Pasick said. “We say, ‘You have an hour. Young person, ask what questions you’ve always wanted to ask. Elder, make sure that you tell a story that you think this person really needs to hear to go off into the future with some hope.’ These one-hour discussions catalyze many more hours of talking at home or in the neighborhood.” 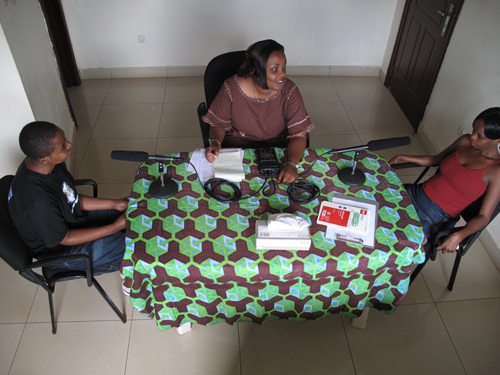 In a style similar to StoryCorps, it invites youths and elders to come together and have an audio-recorded dialogue. It's an effort to resurrect the culture's rich oral tradition, which was quieted by the 1994 genocide. Photo courtesy of Patricia Pasick

For the people who took part in Stories for Hope and for those who listen, whether in Rwanda or beyond, Pasick and Wallace hope the project can link the past and future in a constructive way.

“The past can be a place of great pain and a place of great learning. It can help to enhance our own humanity because these primary materials can connect you with people in a way that nothing else can,” Wallace said.

The dialogues, and their place in the Rwandan National Archives, send a strong message of resilience to Pasick.

“The stories say this: We survived to a point where we are intent on preserving what happened as a way of not repeating it,” she said. 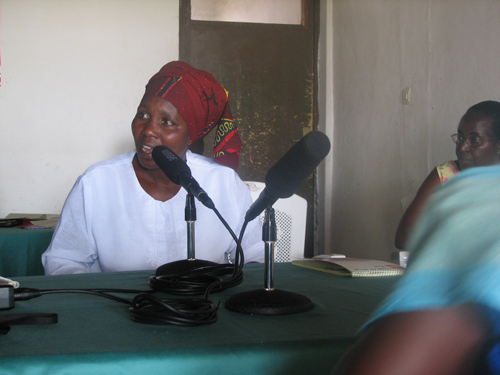 The Stories for Hope permanent exhibit will be an interactive listening station—a table, four chairs, two CD players with headphones and a catalog of CDs, along with two informational panels and an invitation to participate. Many of the stories are posted at the Stories for Hope website.