AUSTIN, Texas — Global warming is clearly affecting plants and animals, but we should not try to tease apart the specific contribution of greenhouse gas driven climate change to extinctions or declines of species at local scales, biologists from The University of Texas at Austin advise.

“Yes, global warming is happening. Yes, it is caused by human activities. And yes, we’ve clearly shown that species are impacted by global warming on a global scale,” says Parmesan, associate professor of integrative biology.

Policy makers have been recently pressing biologists to dissect how much of the changes observed in wild species are due specifically to greenhouse gas driven climate change versus other possible factors, including natural changes in the climate.

However, research funding is limited, and the scientists feel it should be directed more toward studies on species adaptations and conservation of compromised species rather than trying to figure what percent of each species’ decline is due to rising greenhouse gases. One reason is that, from the perspective of wildlife, it doesn’t matter what proportion of climate-change impacts are caused by humans. 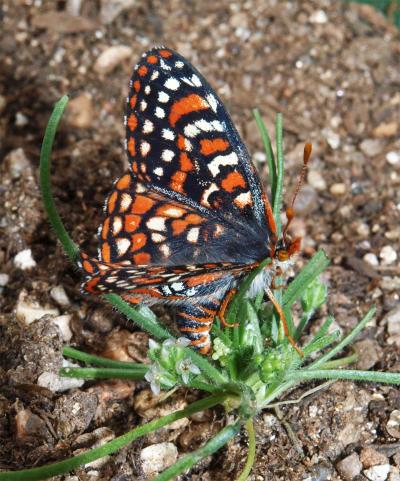 They argue that the focus ought to now be placed on the interactions of climate change with impacts of other human activities, such as air pollution, invasive species, urban sprawl and pressures from agriculture.

“Effects of climate change are everywhere, but they act on top of all these other stresses faced by wild species,” says Parmesan. “What we need to do now is to focus on extensive field experiments and observations that try to understand how multiple factors, such as exploitation or habitat fragmentation, interact with a changing climate to directly affect these species.”

Take, for example, the Quino checkerspot butterfly in Southern California.

The butterfly became endangered in the 1980s principally because of growth of Los Angeles and San Diego. Only a handful of populations remain in the United States, and they suffer from a complex of factors. A warming and drying climate is shortening the life of host plants, causing caterpillars to starve. The plants themselves are suffering from competition with introduced Mediterranean geraniums, likely encouraged by nutrients in rain falling through polluted air.

“All of these things have been happening, so when we see one of these populations wink out we suspect them all,” says Singer, a professor of integrative biology who has been working on this species since the 1960s. “Climate change is definitely part of the context for this butterfly in this system, but it isn’t the only driver.”

The scientists offer another example in corals. Incidences of coral bleaching have increased since the 1970s due to unusually high ocean temperatures associated with global climate change. Corals can recover from bleaching, but biologists have noted that recovery is worse in areas that have been hit directly by human activities, such as over-fishing, introduced species and water pollution.

For conservation biologists and policy makers, it’s critical to understand those local driving forces, so they can make appropriate, and sometimes immediate, interventions. Tackling climate change itself is a problem on a different level.

“Think globally about climate change and how that’s going to affect your national park, or your reserve or your endangered species,” says Parmesan, “but in terms of action, you’ve got to think locally about what you need to do in terms of habitat restoration, removing invasive species, assisting species migration, etcetera. Those are things you can and should do something about in the short term.”

Parmesan shares a Nobel Prize with the authors of the Intergovernmental Panel on Climate Change for their 3rd Assessment Report.